We Were Visiting Friends

Reflections on Avey Tare and Panda Bear playing Sung Tongs in its entirety. 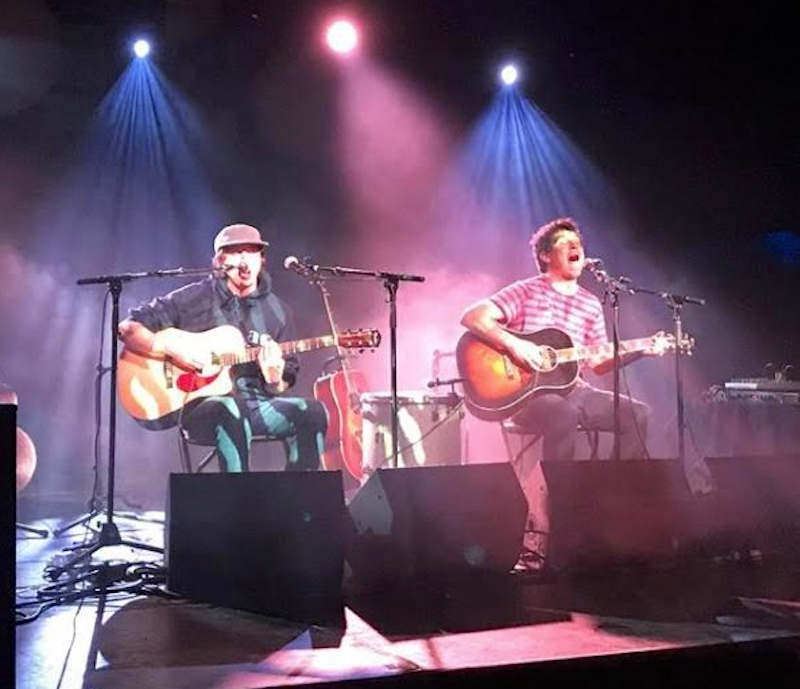 In 2008, Pitchfork’s Mark Richardson asked three members of Animal Collective if they’d consider performing one of their albums in their entirety at a Pitchfork event. Geologist was blunt: “No. For a lot of records I think it would be impossible, because a lot of things have been stolen or lost or recorded over… if we did it we’d probably do it the way we do old songs now where it’s reworked, and I don’t think that’s the point of that concert series.”

Nine years later, Avey Tare and Panda Bear played their 2004 acoustic masterpiece Sung Tongs in its entirety plus two period B-sides to a rapturous crowd at the Knockdown Center in Queens. The event was ostensibly a 21st birthday party for Pitchfork, started by Ryan Schreiber in his Minnesota basement in 1996. Topaz Jones, Moses Sumney, and (Sandy) Alex G opened, but I’d say 90 percent of the crowd were hardcore Animal Collective fans—many who drove several hours or flew out from all over the country to see them play Sung Tongs front-to-back with the same setup they had on those 2003 tours, when they were performing to empty bars and playing Golden Tee whenever they weren’t on stage.

Avey and Panda walked out, two acoustic guitars each, with a single floor tom between them, sitting in folding chairs. Just before they started playing “Leaf House,” Avey grinned and whispered “sunnnng tonnnngs” and the madness began.

It was a holy set. I’ve seen AC eight times now, and while I’ve written in the past imploring fans past and present not to take them for granted while they’re still around making music and playing shows, there was no cynicism or couched feelings at the Knockdown Center on Saturday night. I was smoking a cigarette outside earlier in the night and talked to someone who’d flown out from Austin, Texas, and we had a blast going through the most geeky shit: best live era, best boots, which records surprised us after knowing the songs live, the new Panda Bear EP coming out next month (he hadn’t listened to Panda’s recent Desert Daze set of all new material and was waiting to hear the record).

These are common conversations at an Animal Collective show, an excitement without any of the cultish nonsense associated with The Grateful Dead. Except for the one dude who peaked during “Leaf House” and fell down in front of me, I didn’t see many people obviously on drugs, but who knows, it was hard to tell—the night put everyone in a natural trance. I ran into so many people from Baltimore, friends and acquaintances, and we all had that familiar conversation about Pitchfork: hate the reviews, hate the pose, hate the politics, yet we read it every day. Moses Sumney had the quote of the night: “Happy birthday, Pitchfork. 21 years of making dreams and destroying lives.”

Nine years ago a set like this might’ve felt antithetical to the AC’s entire ethos of ceaselessly moving forward and never looking back, but central to that philosophy is always trying something new. Just as they recorded and released a record nearly two years ago before playing any of it live for the first time, the Sung Tongs set was another experiment, another successful highwire act. Many of the songs on that record haven’t been played live since 2003: “The Softest Voice,” “Visiting Friends,” “College,” “Whaddit I Done.” Others had only been played live in radically-altered arrangements, like "Who Could Win a Rabbit," “Kids on Holiday,” “Sweet Road,” and “Good Lovin’ Outside.”

I don’t think Panda Bear has played an acoustic guitar on stage since 2004. Everyone was in tune, screaming every single word of the record in harmony with the band. The night’s best surprise was the inclusion of “Covered in Frogs,” a Sung Tongs era song that was never properly recorded or released. And after the record’s blissed-out denouement “Whaddit I Done,” usually soaked in auto-wah vocals but sang straight for once, Avey and Panda played one more “sung tong, just one that’s not on that record”: “Prospect Hummer.”

Earlier in the set I saw someone propose to their spouse during “Winters Love,” and dozens of people weeping, cheering and singing along when needed and remaining dead silent during “The Softest Voice” and “Visiting Friends,” the 12-minute electro-acoustic epic meant to recreate the drone and “wall of hums” of Wolfgang Voigt’s electronic work as Gas.

I closed my eyes, held onto my Tascam Zoom recorder, and put my hands to my heart. When I did take a look around the room during the song, I saw many people openly weeping. I love Animal Collective and Sung Tongs, but what made this show so special was how excited and in tune the crowd were: a thousand people moving and swaying and singing in unison, a single organism. All of the logistical nonsense of getting there, going through security, body aches, sitting through a dull opener (loved Moses Sumney, but Alex G just ain’t my bag)—it all evaporated for 80 magical minutes.