Wanna Go For a Ride? 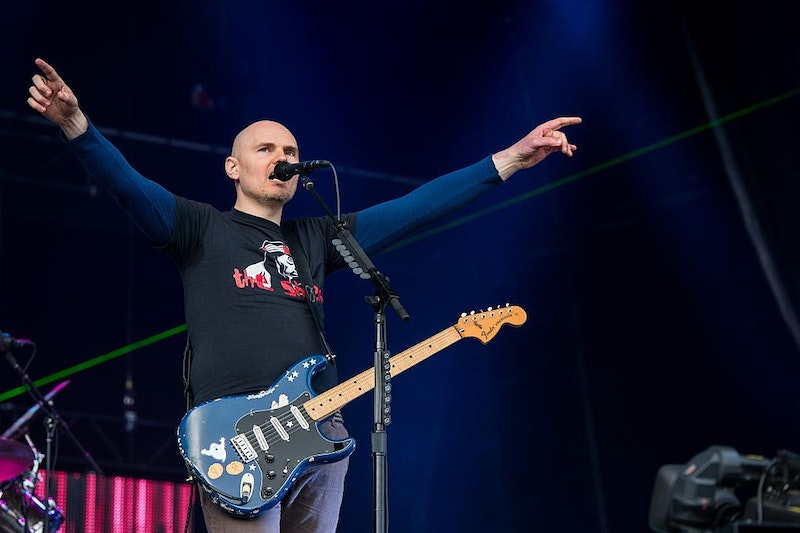 The Alex Jones guest spot, the pro-wrestling obsession, hours-long synth jams in tea houses, sour shit-taking: it’s easy to ridicule Billy Corgan, because sometimes he invites ridicule. Solo or otherwise, the Smashing Pumpkins frontman hasn’t captivated the public imagination in over a decade. So every now and again it’s necessary to travel back in time to remind ourselves why we cared in the first place.

A gem from the band’s under-explored folk tangent circa Mellon Collie; fans love to cover “Jupiter’s Lament,” probably in large part because everyone’s been dumped or had to dump someone, or both. The link leads to the “barbershop” version; the best, original take consists of just Corgan and an acoustic guitar.

Whole lotta God talk throughout MACHINA—to be continued a few years later on Zwan’s Mary, Star of the Sea—but on “Wound” it’s confined to the last verse, the better that the listener might twirl, hair-shirted arms outstretched, within a pulsating sonic twister.

Of course the video is a fairly bald metaphor—drummer Jimmy Chamberlin dressed down, Corgan beaming in cult-leader mufti, caught in a whirl with youthful clichés who could’ve been you or me or whoever—for a loss of commercial control, a crumbling center of gravity. Zeitgeist as a whole turned out to be a faceless, bullshit comeback bid, with “Tarantula” serving as sole evidence that any degree of artistic grace or continuous sonic DNA survived. Beyond this point, Pumpkins fandom becomes a tough slog.

The Romantic arena apex, or very near to it, of the Pumpkins’ electronic adventures.

I know, I know—but they owned it, right? A cover that’s still capable of giving me goosebumps.

That moment towards the end when the vocal cuts out but the song chugga-chugga-chuggas to its denouement felt profound at the time, in ways that’re difficult to explain now because the Smashing Pumpkins ultimately reformed. Fitting epitaph no more, it exists now as a mood-ring swoon, a melancholy line of demarcation dividing eras as different as night and day.

Their “What I Am” theme-wise, if not commercially. Bassist D’Arcy Wretzky talked Corgan into including this steampunk slice of New Wave on Adore, and thank goodness for that.

They looked the part of how they sounded, then—stoned, dreamy, like hippies. A false positive, “Rhinoceros” was, at least, a signpost for the masterful dynamics the Pumpkins were capable of summoning whenever they were so inclined.

I’ll always associate “Today” with pre-dawn high school swim team practices: waking absurdly early, groggily catching the right busses, plunging half-asleep into a pool in a Speedo I’d never be caught dead in now. And like the vast majority of fans for whom Siamese Dream was so foundational, the suicidal swirl accompanying this song went completely over my head at the time.

“It’s just, you know, the superhero needs a costume,” Corgan confided to SPIN in early 1996 about the ZERO t-shirt—black, with silvery script and stars—that he donned most nights on the Mellon Collie and the Infinite Sadness tour. Ballsy and metal, its namesake was and remains one bristling bulldozer of a single, all bile and churn, sturm und drang, semi-sacrilegious fourth-wall toppling.