Here's to the Holiday Spirit 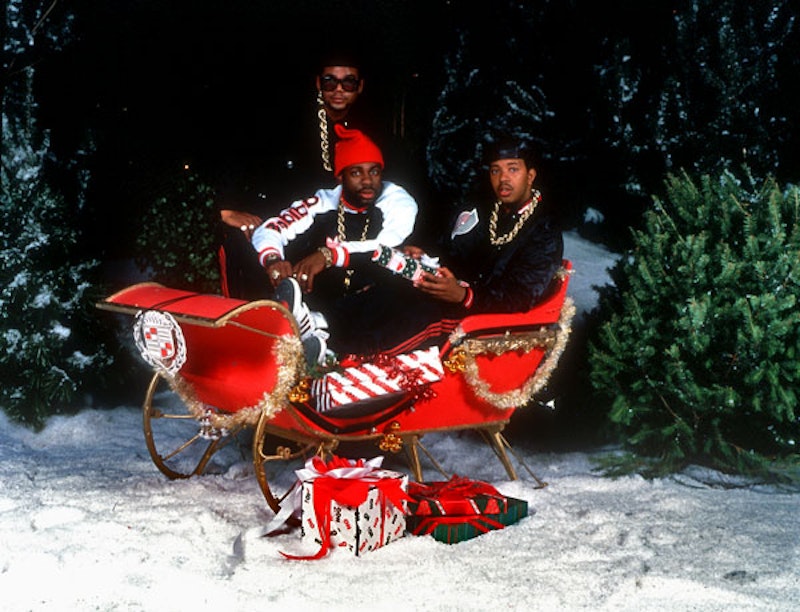 At first, each holiday season, Christmas music is awesome, but after you hear “Grandma Got Run Over By a Reindeer” for the 20th time, you want to throw every radio you can find into a flaming dumpster. But good Christmas music exists, and here are my Top Ten favorites:

10). “Fairytale of New York” by the Pogues with Kirsty MacColl

When a song takes place on Christmas Eve “in the drunk tank,” it won’t be a Hallmark Channel Christmas story. The song details the failed romance between a drunk Irish guy and jilted Irish woman. He promised her Broadway when they first met, but in the end they both fucked up each other’s lives. Now on Christmas they refer to each other as “an old slut on junk” and a “cheap lousy faggot.” At least Irish people are brutally honest with each other!

9). “What Christmas Means to Me” by Stevie Wonder

This classic is full of happy imagery and a swinging beat that will make even the Grinch rock around the Christmas tree. If this song doesn’t make you feel like running wild with Stevie, check your pulse!

8). “The Season’s Upon Us” by Dropkick Murphys

Continuing the tradition of brutally honest Irish rockers, this Celtic punk song is for all of us stuck with shitty relatives on the holidays. From “whack-job” sisters with equally obnoxious husbands to nephews who give shitty Christmas presents to selfish drunk dads, this song will make you feel better about spending the holidays with your cousin that’s always mooching money off you.

I know most of you are tired of hearing this year after year, but hear me out. John was an abusive dick. Yoko’s voice makes nails on a chalkboard sound like Beethoven’s 9th Symphony. Wanting war to be over isn’t enough to actually end war. Still, the song has a great message of hope. Plus, the kids singing, “War is over if you want it, war is over now” still brings a tear to my eye.

Atheist comedian, singer, and songwriter Minchin finally answers the old question, “Why would an atheist celebrate Christmas?” True, we don’t believe in the nativity story, and we don’t like all the gross commercialization either. Instead, Christmas to us is about spending time with our loved ones. It’s a pretty song that really tugs on the heartstrings when Minchin tells his infant daughter that she might not understand family gatherings now, but will when she grows up.

5). “The Little Drummer Boy/ Peace on Earth” by Bing Crosby and David Bowie

David Bowie makes everything better. Originally the producers wanted Bowie and Crosby to sing “The Little Drummer Boy” together, but Bowie hated the song and asked to sing something different. The producers wrote some new lyrics for Bowie, and the result is a beautiful song with a humanitarian message.

4). “Christmas Wrapping” by The Waitresses

Not everything was bad in the 1980s, and this song proves it. It even has a nice little love story: girl meets boy, girl keeps crossing paths with boy but never hook up, girl finally connects with boy during a last-minute trip to the grocery store for cranberry sauce.

3). “That Was the Worst Christmas Ever!” by Sufjan Stevens

It’s hard to pick just one Sufjan Christmas song, but this is a beautiful short song about Christmas growing up with a violent father. It also helps that Shara Nova of My Brightest Diamond provides haunting backup vocals.

2). “I Believe in Father Christmas” by Greg Lake

It’s a sad song about how the magic of Christmas turns out to be a myth, but it’s still great. Maybe we all need to grieve that loss of innocence from time to time. As compensation, the video ends with a soldier reuniting with his son, so at least that ends on a good note.

What’s not to love about this? It’s fun, funky, and it’ll make anyone hungry for chicken, collard greens, rice, stuffing, and mac ‘n’ cheese. Plus, it has a great message about how you should never steal from Santa, even if he accidentally drops a wallet filled with millions of dollars.