When George Will Thought He Understood Bruce Springsteen

The Bowtie meets The Boss. 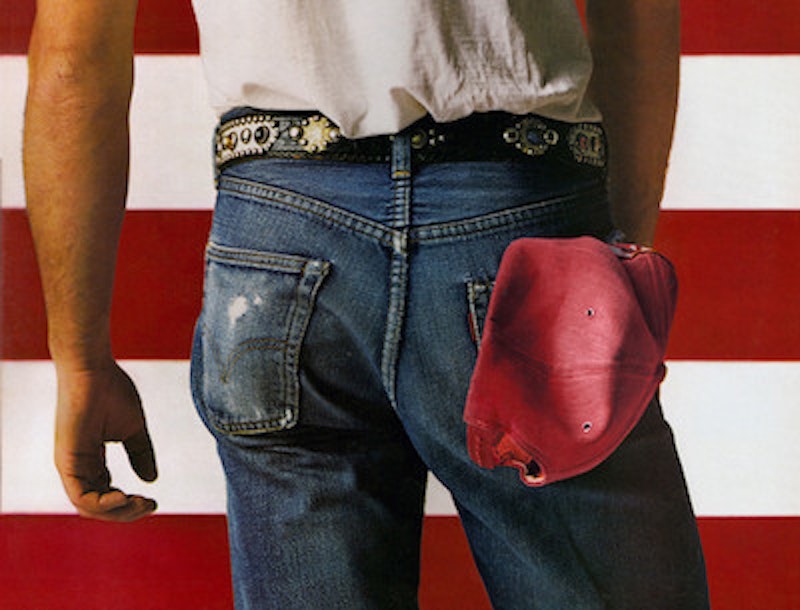 The right is still trying to make sense of Bruce Springsteen, the rock star who reads Howard Zinn but whose career peak featured an abundance of red, white, and blue. At National Review, Kyle Smith revisits summer 1984 and Born in the U.S.A.with “Bruce Springsteen, Accidental Patriot.” If I read Smith right, he considers Springsteen’s heavy flag use to have been a bit of careerism that inadvertently helped Ronald Reagan win a second term. But the case is more indicated than made, and the headline, whoever wrote it, suffers from presumption regarding the principles involved. “Accidental Jingo” would’ve been better, though not as flattering to the readers of National Review.

The essay does point us back to a brief, long-ago flash of self-insight experienced by George Will. In 1984 he wrote, “I have not got a clue about Springsteen’s politics.” Unfortunately the sentence’s full version is this: “I have not got a clue about Springsteen’s politics if any, but flags get waved at his concerts while he sings about hard times.” The Bowtie had ventured to his first rock show and was happy to see that the rock star in question had the right stuff: “He is no whiner, and the recitation of closed factories and other problems always seems punctuated by a grand, cheerful affirmation: ‘Born in the U.S.A.!’” The rest of us could learn something, Will concluded: “If all Americans—in labor and management, who make steel or cars or shoes or textiles—made their products with as much energy and confidence as Springsteen and his merry band make music, there would be no need for Congress to be thinking about protectionism.”

Will’s ancient column belongs to the mid-1980s cultural moment that saw the last of the baby boomers enter adulthood. The country’s pundits, looking new-edition America up and down, decided that the hippies hadn’t done so much damage after all. Will winds up by praising “the astonishing vitality of America’s regions and generations. They produce distinctive tones of voice that other regions and generations embrace.” Given that the column has little about New Jersey but something about pot and a good deal about rock, I suggest that “generations” is the key word in that passage. The unspoken message: the former punk kids had come through.

But the column also demonstrates a feature of the conservative mind. Will looks upon someone, Bruce Springsteen, who’s definitely the right sort of person living the right way, with good values (“community and roots and perseverance and family,” as a Springsteen fan tells him), plenty of flags, “not a smidgen of androgyny,” and a lot of cheerful hard work. Therefore, Will can’t conceive that this person believes that American life shafts a good deal of the country’s inhabitants, most notably those lacking money, white skin, or a penis. Will’s blind spot survived exposure to the Boss talking onstage about laid-off workers. It survived exposure to the lyrics (“to go and kill the yellow man,” “wind up like a dog that’s been beat too much”) of Springsteen’s “ringing affirmation.” Will managed to bypass those lyrics while still quoting an entire stanza from “Working on the Highway.” Of course, he also missed that the narrator of “Highway” is on a prison road gang.

The year of Born in the U.S.A. was the year before Rambo II. No wishful thinking was needed to paint Sylvester Stallone as an all-out U.S. fanboy. In fact he was a plain jingo and his new movie was a 96-minute dream about shooting up Vietnam. At the time, I considered that the contrast between these two muscle-bound pop gods might present conservatives with a stumper. The right held that the 1960s had corrupted the masses with the notion that self came first and everything else came nowhere. The right also held that their beliefs were the antidote to this corruption.

With Reagan in office, they figured the antidote was working. But if “community and roots and perseverance and family” are the answer, then Springsteen would seem to score better than the Reagan fan. That’s with the exception of perseverance, where I suppose they tie.

Much as Springsteen’s career is built on his wonderfulness, it isn’t about his wonderfulness—you could ask the fan that Will talked to. But a typical Stallone movie is about one man who’s better than everyone else and triumphs accordingly. The keynote of the Stallone hero’s superiority is willpower, and its outward sign is a lot of muscles. Springsteen lifted weights, but his muscles were never oiled and lit for a close-up. Stallone all but built a shrine to his. Will on Springsteen: “His songs, and the engaging homilies with which he introduces them, tell listeners to ‘downsize’ their expectations... It is music for saying good-bye to Peter Pan: Life is real, life is earnest, life is a lot of work...” Life is certainly all those things, and Springsteen’s music reflects that. Stallone’s movies don’t, not unless you count the training montages. But these differ from hard work in being brief and in having a soundtrack to let you know you’re killing it. Further, Stallone has spent much of his life in the collection of hot chicks.

The right dealt with this contradiction by not noticing it. As conservatives see it, political views like Spingsteen’s indicate that a person was either born rotten or was rotted by professors, the media, Barack Obama, and so on. A person whose insides are right doesn’t have that look on their face, especially not when looking at the U.S. The conservative project, seen on its own terms, is to keep the squishifying forces from spoiling people. Otherwise the country won’t have enough upstanding citizens for society to remain on its feet. It will all fall over while people wait for their welfare checks, abort children, and paint each others’ toenails. Bruce Springsteen, being just one person, doesn’t prove this philosophy wrong. But he and Stallone do provide an example of how ideologues can look past inconvenient facts, even facts that have massive publicity budgets behind them.

Since then the baby boom has only grown older and America more boomified. We all know where we’ve ended up. Even George Will knows it. The man who got Springsteen kind of wrong has Donald Trump pretty much dead to rights. Will left the Republicans because they signed on with that spoiled, entitled, highly self-oriented blob. Will’s old party now looks at their swollen man-child and pretends he’s a leader. Meanwhile, the rest of us have Bruce Springsteen.