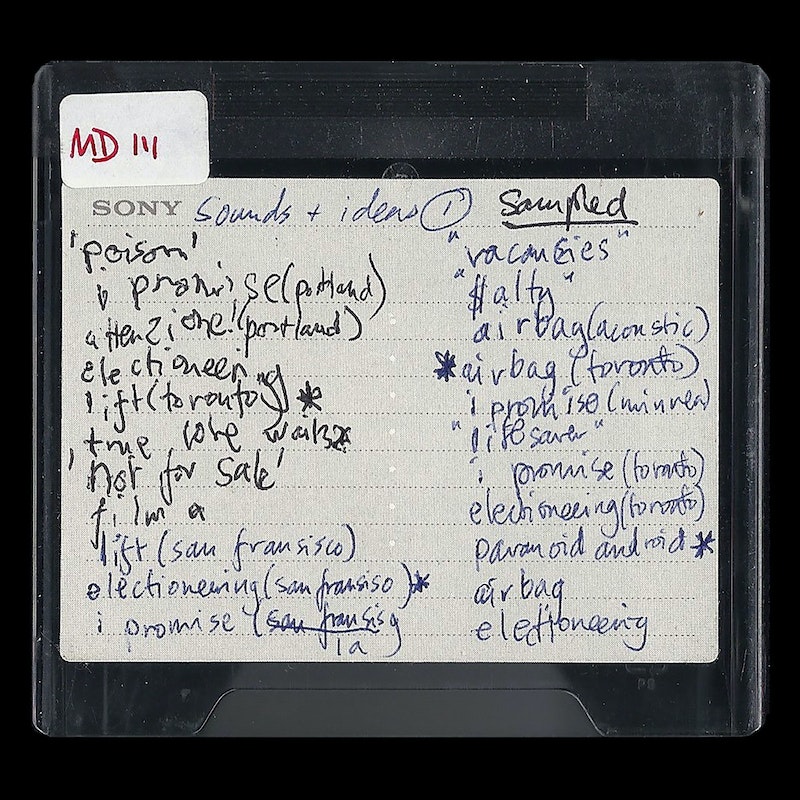 Radiohead’s the only modern rock institution left that can sell out arenas in minutes and regularly receive acclaim from critics. Pearl Jam, Foo Fighters, U2, Nickelback, Metallica—these are their stadium contemporaries, and none have been culturally relevant for decades. All other candidates have broken up, overdosed, committed suicide, or so squandered their good will that they’re left without lovers on either side. So it’s no surprise that Radiohead would respond to an attempted ransom and subsequent leak of OK Computer studio tapes the way they did: sell them officially on Bandcamp, with all profits going to Extinction Rebellion, a philanthropic ecological organization.

Jonny Greenwood: “We got hacked last week—someone stole Thom’s minidisk archive from around the time of OK Computer, and reportedly demanded $150,000 on threat of releasing it. So instead of complaining—much—or ignoring it, we’re releasing all 18 hours on Bandcamp in aid of Extinction Rebellion. Just for the next 18 days. So for £18 you can find out if we should have paid that ransom. Never intended for public consumption (though some clips did reach the cassette in the OK Computer reissue) it’s only tangentially interesting. And very, very long. Not a phone download. Rainy out, isn’t it though?”

The Bandcamp version is rearranged and missing some bits of found sound and all James Bond material, but otherwise it's the same thing that leaked last week. Yes, it is a lot, it is unwieldy, but isn't this wonderful? Who knows how many people are interested. I think a hundred thousand tops, a friend of mine said "millions"—okay, let's take a deep breath here. Not that many people are paying attention to this. Highlights and spreadsheets have already been culled by Radiohead super-fans, and Pitchfork has a nice but brief rundown of a dozen gems. The superior take of "Lift," the fabled 12-minute "Paranoid Android," the feeble full band "True Love Waits," and the gorgeous straightforward band arrangement of Kid A closer "Motion Picture Soundtrack" will be heard. How many people are going to listen to the whole thing? Who cares? This is great. One is enough!

Radiohead fans are in love with their sadness. I'm reminded of the British anchorwoman in Meeting People is Easy who watches the music video for "No Suprises" and calls it "music to slit your wrists to." For a band of such doom and gloom, the five members of Radiohead seem like remarkably well adjusted rockstars. They knew how to react to this. Why didn’t this hacker go after a band less versed in the etiquette of the Internet? The band, especially Thom Yorke, have understood the possibilities of the digital age since at least the mid-1990s. They know that once something leaks, it’s out there forever, no way to put toothpaste back in its tube. A similar attempted ransom and subsequent leak hit The Smashing Pumpkins in 2016, although its bounty wasn’t nearly as long: just a handful of demos, some very good, and a couple curios, like a soundcheck rehearsal from Asheville in 2007 where you can hear Billy Corgan teaching the bassline of “Crush” to recently hired Ginger Reyes, and even more amusing, Jimmy Chamberlin confuse “Hello Kitty Kat” and “Frail and Bedazzled.” Corgan’s response to the leak was typically stupid and out of touch, with vicious missives and minions offering "cash rewards" for whoever could turn in the leakers. Most of the demos in question were being prepared for the still unreleased Machina reissue, so perhaps the panic was warranted. But Corgan has always resented his fans, and if 18 hours of Siamese Dream or Mellon Collie sessions leaked tomorrow, he’d have warpaint on. Asked about the leakers last year, Corgan said that "we are now pretty sure who it is. When the person is right that person will be sued into oblivion."

What a world away from the example set by Radiohead. The irony of the OK MiniDisc leak is that if they officially released these 18 hours of outtakes, alternate versions, boombox demos, snippets of found sound, and experiments—for any price—droves would call them pretentious and greedy. They’d say it’s ludicrous to think that anyone would listen to 18 hours of raw work material by any band. This, of course, is another pre-Internet, monoculture idea of what people want. No, these 18 hours probably won’t interest more than a few thousand people—that might sound like a lot, but keep in mind that Radiohead is one of the most popular bands in the world. Even "millions" seems absurd now, but it might've happened 20 years ago: OK MiniDisc the Great White Wonder of its day, only 17 hours longer. And don’t forget someone like Jim O’Rourke, who regularly releases album-length studio jams, experiments, and work material on his Bandcamp page Steamroom: “There’s like 50 or 60 people out there who want to hear those things, and they listen to them and that’s great.” Twenty million people will never buy the same album again—like Thriller, Nevermind, or any Beatles release—but dozens if not hundreds would happily pay a couple of sawbucks for unedited studio tapes for any artist that can sell out Webster Hall or the 9:30 Club.

Artists that compromise themselves still trying to go as broad as possible—once again, I’m looking at Corgan—they’re left without critics and fans. No wonder both camps clamor for classic album tours when the Pumpkins insist on releasing an album as atrocious as Shiny and Oh So Bright, Vol. 1: No Past / No Future / No Sun. The curtain has fallen, and Corgan’s attempts at crossover radio hits are misguided failures, shiny happy pop that pleases no one. Now that they have James Iha back, the Pumpkins can play arenas again and sell some of them out, but let’s see how long that lasts before Commander Corgan throws another temper tantrum. The bathos of his Instagram Q&A’s is so disappointing as a diehard fan, and it’s all you need to know about his petty cluelessness.

Radiohead’s lauded with that annoying word “classy” for what they did, and it’s admirable. Shrugging off such a substantial theft with “Rainy day, isn’t it though?” and a concession to charity is just so cool and of the moment. Again, imagine if Radiohead released this officially. They’d never hear the end of it. Now, they’re folk heroes once again. I love this shit, and so do a few thousand others. Hackers, hack away: if you hit the right people, you might just help refugees of the inevitable climate apocalypse.