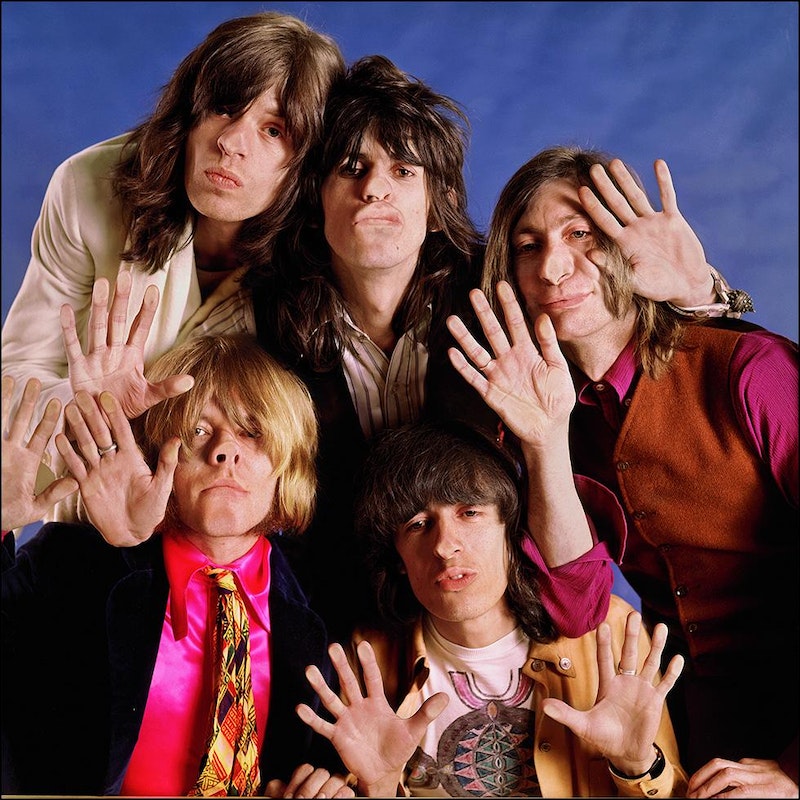 Their background as devoted blues purists. The thing about cover songs by the Stones is that the originals are always better, without fail, and the early covers make you feel like the real songs couldn’t have been any good at all. It was years before I heard the Marvin Gaye "Hitch Hike" and realized it was fun. I hadn’t known it was supposed to be fun.

Their big comeback 40 years ago. I mean Tattoo You, the kickoff to a series of gold-watch ceremonies that were bestowed upon aging rock gods during the early-1980s. McCartney had his Tug of War, then Bowie his Let’s Dance and Fogerty Centerfield. They followed the Rolling Stones and Tattoo You, first in the decade’s series of overpraised air balls that were treated by media and market as returns to form by beloved rock pioneers. There was no such return and especially not in the case of the Stones. The Tattoo You album and concert tour proved to be the first square on the band’s decade-long transition toward life as an oldies outfit. The other gold-watch acts made the same choice within the same space of time, and the first step was to put out a record that everybody pretended was as good as the old ones. Tattoo You wasn’t and I’ve never forgotten the charade.

Their big ballad. “Wild Horses.” Kind of droopy. There’s also “Sister Morphine,” another four minutes in purgatory. “Moonlight Mile” is even longer and not much perkier, but enough to stay in the game. “Wild Horses” is dull without relief and is also held up as the group’s supreme ballad, so that’s where I focus my dislike. All in all, though, the second side of Sticky Fingers has got some problems and it’s a good thing “Dead Flowers” is there.

Their big comeback 53 years ago. Beggar’s Banquet. The album’s humongo-riff number, “Street Fighting Man,” has always struck me as the thinnest and least satisfying of the band’s riff thumpers, at least until “Start Me Up.” “Sympathy for the Devil,” is a look-at-me cape-flapping taken to grandiose lengths; still, it’s clever and gets its effects. The main problem with Beggars Banquet is really my problem, in that I don’t have an ear for subtle instrumental work. I’ve finally learned to appreciate Brian Jones’ slide guitar on “No Expectations,” but that’s after 40 years and with the help of documentary footage in which Mick Jagger muses about the solo and we see Jones performing it. As a teenager hearing an album, I encountered many tracks of a bleak, steel-stringed monotony, with “No Expectations” as forbidding as any of them.

Their beloved classic of an album. Let It Bleed. The record’s a trudge except for the superb “Gimme Shelter” and the interesting almost-success “You Can’t Always Get What You Want.”

Their bravura displays of stage mastery and bold transgression. Look at “Midnight Rambler.” This was a snooze from first listen and rapidly became an embarrassment. In 1979 I watched a concert film of jump-suited Jagger thumping the stage with his belt; I reflected that perhaps these things must be seen within their proper era; Hitler’s speeches hadn’t looked absurd to their audience, I thought. But they did look absurd when seen from 1979, and so did Jagger’s rendition of “Midnight Rambler” as performed in that lost world of 1972. Like the superhero genre, rock has a certain amount of stupidity built into it; the dumbness makes possible the good things that come with the genre. Still, the dumbness can get out of hand. “Midnight Rambler” is really stupid (eight minutes of someone going “Oh! Oh! I’m scary!”) and it was especially dumb when performed by Jagger for that concert movie long ago.

Their lead singer. His voice, that languishing frog croak. It’s certainly a flexible and strong instrument that he uses with skill. But it’s unlovely to hear and brings with it memories of the singer’s personality and appearance, both of which lost their charm sometime toward the start of the past half century. “The man you hate to love,” Pauline Kael called Mick Jagger when he was still young and marred only by his arrogance and pretension, not by his eventual resemblance to a voodoo doll’s grinning fetus. Even in the old days his stage act, at least as seen on film, didn’t live up to its acclaim, and since then little has changed except the set accessories. Compared with Prince, Jagger on stage seems like a man of meager resources. One of his staples is simply to flail about, flapping his body; his hands and shoulders want to get away from his hips and have no idea where they’re going, and that’s his act.

Now, with his beauty fled and his act grown stale, the old flamer serves as an oversize dashboard ornament representing how ancient and stubborn the Stones enterprise has become. A 76-year-old man puts on a belly shirt and then shows himself to people. It’s only rock and roll? That’s not even rock and roll.