Laughter is the best medicine. 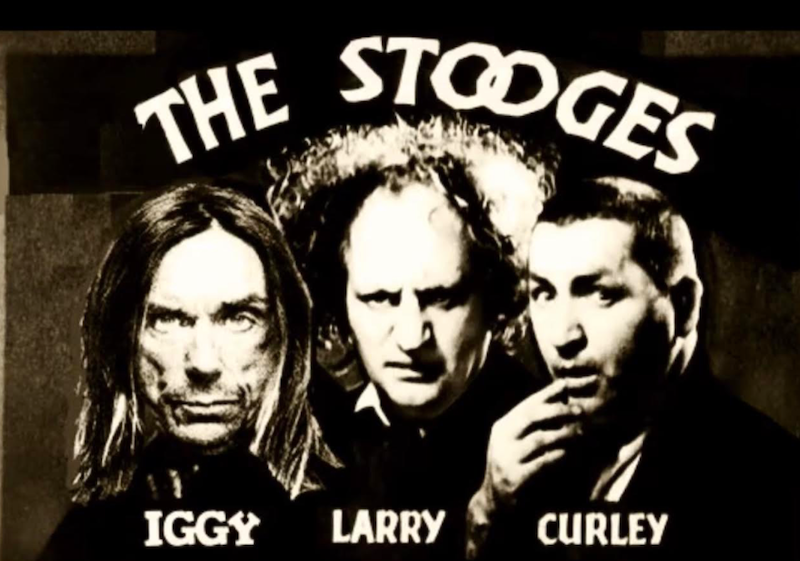 "Listen to the Mockingbird" was an opening theme song for The Three Stooges. The comedy trio evolved from vaudevillian roots into the hilarious slapstick short film reels we loved to watch growing up before the Woodstock/Altamont era to this day. “Three Blind Mice” was the second song often used as an opening instrumental as the film's credits rolled, an ancient nursery rhyme traced back to the 1500s.

Other instrumental arrangements like “Pop Goes the Weasel” and such classical orchestral performances such as “The Voice of Spring” were used as plotted scene vehicles for specific episodes. Could the reasoning be these songs were in the public domain, therefore excluded from royalty fees or copyright infringement? I don't care. Watching The Three Stooges is good medicine. Much like Iggy Pop songs, you want to be there all the time. Maybe even sing along in a mixed-up mishmash.

At the end of the 1960s, a garage sale junkyard band of outcast misfit rock musicians hailed from Ann Arbor, Michigan, making their way to the Hollywood Hills. With bands like the MC5 and countless others, the Stooges forged a new sound. And the young upstarts were off to LA's Elektra Studios to record a seminal sophomore album that recently celebrated its 50th-anniversary (2020). The album is the Stooges’ Funhouse. Originally dubbed the Psychedelic Stooges during that time when taking a trip meant you never left your room.

Mister Pop said he saw the word Funhouse floating across his bedroom ceiling one evening while tripping. Guitarist Ron Asheton called head Stooge Moe Howard for permission to use the name Stooges. Moe granted it and gave the boys his blessings with one stipulation. They could have it as long as they didn't use it in a comedy act. It's noted that the band actually befriended the two surviving Stooges, Larry Fine and Moe Howard, visiting them and bringing gifts of whiskey and boxes of cigars.

This fact is hilarious. I envision Iggy Pop as a surrealistic comedian, acting just as raw, powerful, and funny as any stand-up comic in any period of social satire or political/religious commentary stuck inside a Dali-esque eye. In the same vein as authentic originals like Alice Cooper, Frank Zappa, Tom Waits, Andy Kaufman, Captain Beefheart, Stan Ridgway, Lenny Bruce, or George Carlin. I came of age roughly the same way as most disenchanted kids, tuned in and savvy to the modern times. By watching constant TV, listening to rock, jazz, soul, R&B, deep blues, country-western, etc., and always loving The Three Stooges. Rock ‘n’ roll versus slapstick comedy. Laughter is the best medicine.

Going a step beyond, bearing witness to Iggy Pop's theatrical stage antics, prancing shirtless, mincing lyrics, soaked in sweat, glitter, sometimes blood, covered in gobs of spit from front-row maniac fanatics in a love/hate hypnotic trance. Iggy writhing like an iguana in shards of glass resembling much less of a rock star and more of a sideshow geek in a carnival of lost souls. I have my favorite Iggy songs and albums, as well as the most memorable Three Stooges episodes. It's all an acquired taste, not for the squeamish or those with no sense of humor.

No doubt Iggy Pop had/has his detractors. Luckily he's still around to reap the fruits of his labor and croon on. I salute his tenacious spirit. The Three Stooges, including all three Curleys and two Shemps, died in poverty. Yet they all said they sure had fun going down swinging. It's a sad world that needs all the yuck-yucks and giggles it can get to survive. That's what makes for good entertainment. Exposing class division, anti-war sentiment, the hypocrisy of the pious, and the plight of poverty, non-heroes like Iggy Pop and The Three Stooges are necessary. They reveal the cracks in society and the mundane in culture. It's high art, no matter what shape it comes in.