The Piece Kor vs. The Pagans

Fears of the draft, trippy meditations, hormonally charged chaos, and industrial noise were fused as The Piece Kor immortalized the sound of exurban America bursting at the seams in the late-1960s. 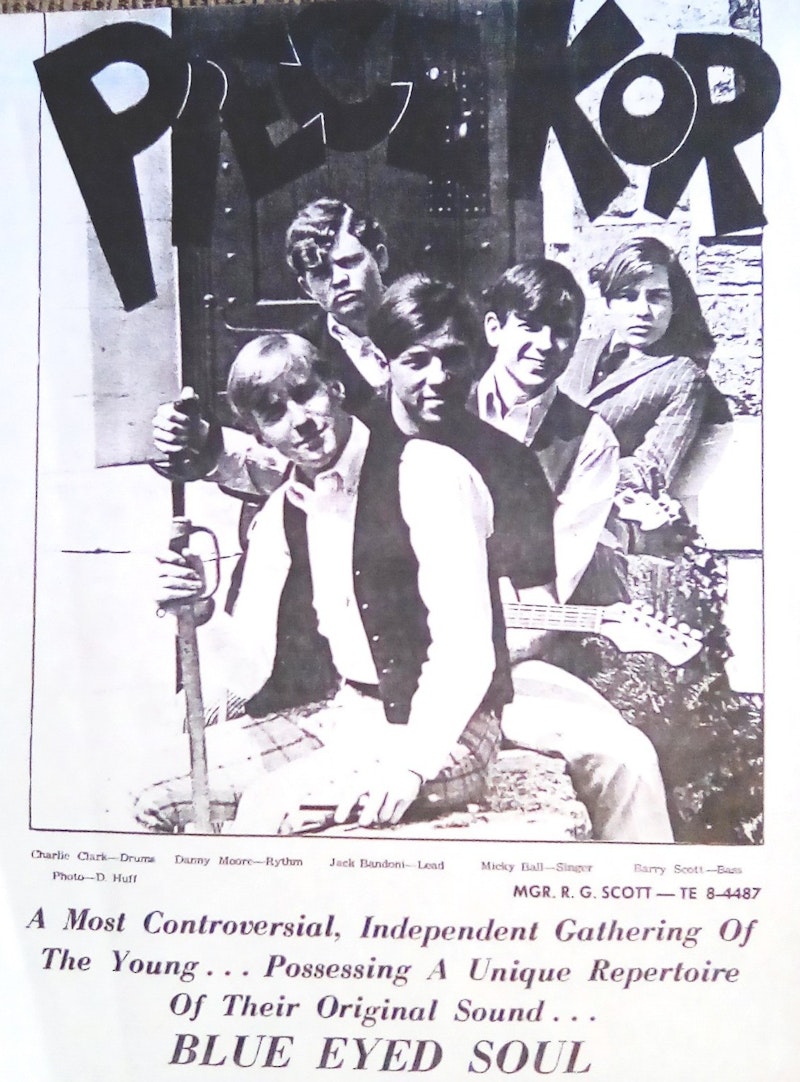 The Laray 7" was a vivid snapshot of teen life’s tumultuous side circa the late-1960s. Fears of the draft, trippy meditations, punk aggression, hormonally charged chaos, and industrial noise were fused as The Piece Kor immortalized the sound of exurban America bursting at the seams. There was nothing like it in Maryland or the mid-Atlantic. The innovative passion these five kids put into their work paid off; both cuts got regular radio play throughout the greater Baltimore, Annapolis, and northern Maryland regions. After the single’s late-1968 release, crowds at The Kor’s live gigs got bigger than ever; gig sales of the record went through the roof. They’d reached the peak of local popularity. It was a big step forward that primed them for even bigger success.

To hype up the record Ray Scott began more regularly booking the group outside of Harford County. Soon The Kor became a staple of teen scenes in Annapolis, Frederick, Md., the Eastern Shore, and the tiny hamlet of Wattsville, VA—home to a roller rink/drive-in theater called The Dream, only a few miles away from remote Chincoteague Island. A concert at this unconventional venue would be central in The Piece Kor’s most unforgettable out-of-town experience.

Charley Clark: Wattsville, Virginia! [They charged] $8 a case for Natty Boh. That was when [our] van broke down. That was with the pick-up truck and my car… we were sprayin’ beer all over while we were ridin’ up the road… Ray (Scott) and I were the only two guys old enough to drink at the time.

With their tour van in the repair shop, The Kor were forced to rent a pick-up truck. The cab of the truck had room for just Scott and Jack Bandoni; Danny Moore and Charley Clark barely had space for themselves in Clark’s gear-crammed car. This left Barry Scott and Mick Ball stuck out in the truck’s bed with instruments and equipment for the entire five-hour drive. Inevitably, jammed in-between bulky road cases and big amplifiers made the teens feel irritable, restless, and bored.

On the way to Wattsville the group ran into trouble when the motorcycle gang The Pagans began trailing them on the highway. The gang initially meant no harm and were just coincidentally heading in the same direction. Once The Pagans rolled along Barry Scott saw a perfect opportunity to inject some action into the dull trip. The lead Pagan rider was just feet away from The Kor’s truck, so Barry started making eye contact with him. Soon the two were locked in an intense staring contest. Finally, after a few minutes, Barry extended his arm and then slowly/methodically raised his middle finger directly before the Pagan leader’s face. The biker became enraged, but was unable to mount any major retaliation as he was practically welded on to his handlebars. A few minutes later the gang pulled off the highway. Relieved that the ordeal hadn’t escalated The Piece Kor soon arrived at The Dream.

Though they’d already played several Wattsville gigs, this 1969 show was the first time they’d performed there since the single’s release.

Charley Clark: “The record first came out and we were really excited. They had it on the juke box.”

Barry Scott: “They had [Piece Kor] posters up.”

Charley Clark: “We were signing autographs on the posters… it was a pretty big rush.”

A throng of young fans buzzed with excitement as the band took the stage. Then, out of nowhere, The Pagans showed up. A deathly silence hung over the packed house as the leather-clad riders approached the stage. The Kor were positive that a dangerous situation could explode. Determined to avoid conflict they paid tribute to the iron horsemen by busting out a spirited rendition of The Byrds’ road trip anthem “Ballad of Easy Rider.”  Incredibly, the gang must’ve been big fans of the tune; they recognized and appreciated the musical gesture as an apology for Barry’s highway hijinx. As the song drew to a close The Pagans exited The Dream as quickly and quietly as they’d entered.