What A Fool Believes

A condensed history of Yacht Rock and the power of Michael McDonald. 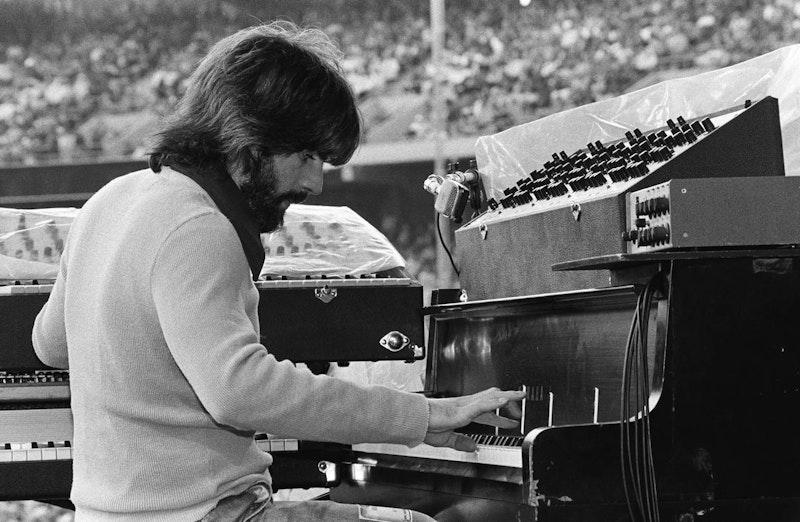 After many years of hearing one of the more ubiquitous songs of my lifetime—The Doobie Brothers' "What A Fool Believes"—I just found out that I've been in the dark about a famous snippet of the lyrics. On Twitter, I asked, "What does 'as she rises to her apologies' mean"?  More knowledgeable fans informed me that it's a "he" who's rising, just before getting dumped, a breakup the poor schlub didn't see coming—"Anybody else would surely know/He's watching her go."

But I still don't get this part: "The sentimental fool don't see/Trying hard to recreate what had yet to be created." Can someone explain how anyone can "recreate" something that hasn't yet been created?

I shouldn't get too hung up on the lyrics of a Yacht Rock song, because that kind of music's all about vibing to a laid-back groove while sipping white wine on a smooth ocean. The words are just there because they're needed to get played on the radio.

And Yacht Rockers knew how to get radio play back in their heyday. They dominated the charts from the mid-1970s to the mid-1980s. But let's establish one thing—Yacht Rock isn't music about nautical themes. "Son of a Son of a Sailor" is not Yacht Rock; nor is "Sail On, Sailor" or "Sloop John B." Yacht Rock is music that J.D. Ryznar, an L.A.-based writer and director, and some of his friends imagined, long after the genre had gone out of fashion, that the Masters of the Universe would play on their trophy boats. In other words, the genre was named retroactively—around 2005—not contemporaneously. Ryznar and his buddies had fun producing their Channel 101 series, Yacht Rock, which poked gentle fun at Yacht Rockers.

Word has it that David Geffen was listening to a Toto song—perhaps the schlocky "Roseanna"—as he gave an update on his COVID status early on in the pandemic, a tweet accompanied by a photo of his $400 million superyacht: "Sunset last night... isolated in the Grenadines avoiding the virus. I'm hoping everyone is staying safe."

Then again, the self-satisfied media mogul could've been listening to Christopher Cross, whose music's been described as "numbing" because of lyrics like this: "Sailing takes me away to where I've always heard it could be." I'm dumping on Geffen, but the guy who discovered Laura Nyro certainly has good enough musical taste not to have been listening to Joey Scarbury's unfortunate 1981 Yacht Rock hit, "Believe It Or Not": "Believe it or not I'm walking on air/I never thought I could be so free." I never thought lyrics could be so insipid.

Yacht Rock lists often include songs outside of the genre. Chris Cross wrote a song about sailing, and it was Yacht Rock, but not because of the subject matter. Jimmy Buffett also wrote sailing ditties, but they weren't Yacht Rock. Mr. Margaritaville didn't bring big-time L.A. session musicians into the studio and obsess over the tones of their guitars. He didn't fret over high-quality production and clean vocals, keeping emotions light (boaters don't want buzz kills), or emphasizing the melody more than the beat. While we're on this topic, America didn't make Yacht Rock—too much acoustic guitar.

By the time Cross entered the Yacht Rock scene with his California-style soft stylings, The Doobie Brothers, Kenny Loggins, Toto, and Steely Dan had already done the heavy lifting in shaping listeners' taste towards the polished and melodic. But if there's a single individual who's synonymous with Yacht Rock, it's the bearded Michael McDonald. The singer/songwriter/keyboardist's yachtiness is of such magnitude that just by joining a band as a temporary vocalist he was able to transform a rootsy Southern-style rock outfit with a slew of hits into Yacht Rockers.

That's what he did in 1975 after the Doobie Brothers had him take over lead vocal duties after Tom Johnston's health fell apart during a national tour. The Doobies almost instantly surrendered to McDonald's mysterious powers, abandoning their successful sound in favor of slick, soft blue-eyed soul. Formerly a respectable folkie with an acoustic guitar, Kenny Loggins succumbed to McDonald's dark arts after driving over to his place in Studio City one day. As he unpacked that acoustic guitar (which was never seen again) at the open front door, the seductive tones of McDonald fiddling around with "What a Fool Believes" wafted out. Loggins went from writing rockers like "Your Mama Don't Dance," while teamed up with Jim Messina, to slick dreck like "Danger Zone" and "Footloose."

Prior to his stint with The Doobie Brothers, McDonald went on tour with Steely Dan. Unlike most other Yacht Rockers, Steely Dan's immaculate tunes had thoughtful, provocative lyrics. McDonald couldn't influence Walter Becker and Donald Fagen, however. Their musical vision was too strong. Instead, they used him just like they used all the rest of the many L.A. session players. He was there to give Becker and Fagen the sound they demanded.