The Piece Kor, and their blistering single “Words of the Raven” b/w “All I Want is My Baby Back." 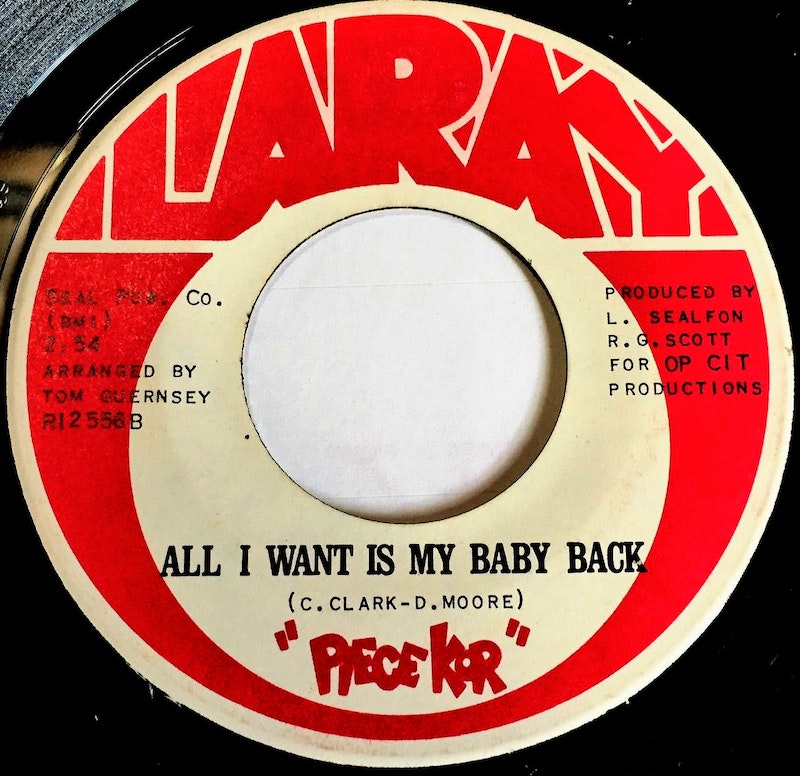 Under the Piece Kor, the band formerly known as The Knights Of Sound, gained their biggest connection to mid-Atlantic media through Kerby Scott, a regional broadcast celebrity. Ray Scott (no relation) was close with Lou Larosso, Kerby’s manager. Through their friendship The Piece Kor were booked on WBAL’s The Kerby Scott Show twice, once performing live and once lip synching (during the latter performance Mick Ball pretended to play a huge balloon shaped like a harmonica). They made many appearances at live events promoted by Kerby including a dance at The Easton Armory where they were supported by San Francisco’s psychedelic E.S.P. Light Show and a dance troupe from NBC’s Hullabaloo. Scott also booked them on bills with hit makers Gary Puckett & The Union Gap and The Human Beinz.

Thanks to the Kerby Scott jobs The Kor were becoming one of the biggest teen rock combos in northern Maryland, a fact that soon caught the attention of Larry Sealfon, yet another one of Ray Scott’s close contemporaries. Sealfon worked as manager for DC 1960s punk legends The Hangmen. Scott had been hyping up The Piece Kor for years and invited his fellow impresario to one of the group’s rehearsals. Their electric attack hit hard—Sealfon decided to start up a new record label purely for the purpose of releasing the band’s music. Ray Scott dug the idea and offered to financially back the enterprise in a partnership. The deal was sealed when the pair christened their new endeavor as LaRay Records—a moniker that combined their first names.

Sessions for The Piece Kor debut got under way in winter 1968. Sealfon tapped The Hangmen’s Tom Guernsey to produce the record at DC’s Edgewood Studios.

Charley Clark: “We were paying $55/hour for studio time starting at about five or six p.m. going through the night over in Washington… and I ate cheap hamburgers so I was sick as a dog… I had about a 103 degree temperature. I was drinking terpin hydrate and codeine, taking medicine… I was dying but we had the studio time.”

What emerged was one of the 1960s deadliest platters: LaRay Records’ only 7” release “Words Of The Raven” b/w “All I Want Is My Baby Back” by The Piece Kor. Both cuts were co-written by Jack Bandoni and Charley Clark. The former cut was an anti-Vietnam War anthem originally titled “The Great Draft Disaster.” As most of the members were Bel Air High School kids, parents took a hands-on role in band activities. Once Bandoni’s father discovered their plan to cut a radical protest tune he threatened to yank his son (the group’s main songwriter) if “The Great Draft Disaster” was released. A compromise from Charley Clark saved the day.

Charley Clark: “Jack’s father just absolutely lost it. He said it was an un-American song… so I sat down and took another song that we’d done called ‘In The Words Of The Raven’ and basically left the content of the [original] song there, but changed some of the lyrics a little bit and that’s the song that ended up getting released.”

“Words Of The Raven” is a Byrds-like psych-garage lament driven by Mick Ball’s desperate crooning and eerie group harmonies. Bandoni delivers a cosmic raga that mirrors the song’s ambitious aims. Even with Poe-inspired elements and less overt nods to Vietnam, the message remains righteous: “It’s time that they listen to the cries that we make/…stop all this fighting before it’s too late/So that we’ll live in peace and let love stop the war/Til they stop all the fighting we’ll say ‘Nevermore!’ ”

Though Clark and Bandoni insist “Raven” was The Piece Kor’s finest hour, the B-side makes the strongest impact. An infinite array of 1960s punk cuts have hijacked the world famous Bo Diddley beat; “All I Want…” stands tall among that primal horde. Ball’s vocals are charged with sexual frustration as the lyrics chronicle the loss of a beauty who’s got no time for materialism: “She got curvy hips and long blonde hair/And she’s the envy of all the girls everywhere/She don’t want diamonds and she don’t want pearls!/Don’t want a Lincoln or a Cadillac!/She’s got the stuff that other girls lack/And now all I want is my baby back!”

Predicting the innovations of Palberta, Crash Worship, and other noisy post-punk acts, Bandoni’s main part features no chords, notes, controlled feedback, and no conventional technique. Instead of playing melodies, Bandoni muted his strings while he took a drum stick and banged out polyrhythms against a metal part of his guitar’s bridge. With amp and axe volumes cranked through the stratosphere, for most of the song’s duration it sounds like a spazzed out kid beating the hell out of an oil can. This atonal smash-a-thon takes the song far past teen rock parameters and straight into the heart of an experimental punk explosion.