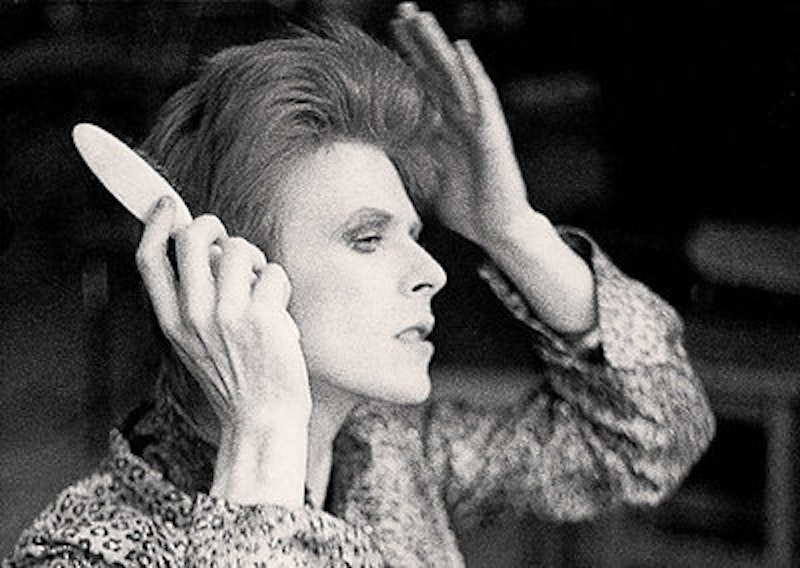 Most people in the media (save Harper’s Rick MacArthur) are settled into an everything’s game online free-for-all; clicks, eyeballs, listicles, all those words that make the stomach growl. Sometimes, on Twitter, I fall for it, as when the left-wing British New Statesman promoted an archived article from July 6, 1973, in which 23-year-old Martin Amis wrote about a David Bowie concert he attended, and declared that “Bowie is unlikely to last long as a cult.” I tapped the link, actually read it, and was puzzled why the magazine would feature a piece that was so wrong. Could be the current editors wanted to embarrass Amis (who served time at New Statesman in the 70s), now that the fallen-from-grace author has, like his late friend Christopher Hitchens before him, taken a turn to the right.

Curiously, amateur sociologist Amis doesn’t cite a single song from Bowie’s show, his last one as Ziggy Stardust, but I suppose he wasn’t there for the music but rather the spectacle and what it meant, at the time, for pop culture in London. He wrote: “Among certain more affluent hippies Bowie is apparently the symbol of a kind of thrilling extremism, a life-style (the word is for once permissible) characterised by sexual omnivorousness, lavish use of stimulants—particularly cocaine, very much an elitist drug, being both expensive and galvanizing—self-parodied narcissism, and a glamorously early death. To dignify this unhappy outlook with such a term as ‘nihilist’ would, of course, be absurd; but Bowie does appear to be a new focus for the vague, predatory, escapist reveries of the alienated young.”

Bowie, of course, didn’t die young: he’s now 68, an elder statesman of the rock world who, to his credit, mostly keeps out of the spotlight, his extensive catalog of ground-breaking music far in the rear-view mirror. It’s especially precious of Amis, not 25 himself, writing about the “alienated young,” but any longtime journalist/author has a footlocker full of articles or books he or she would rather forget. Quite nasty, I’d say, of the New Statesman to highlight a big fat blemish on Amis’ resume.

In reality, Amis (perhaps unaffected by pop music) just couldn’t keep up with Bowie’s calculated career moves. No one, aside from Bob Dylan, was so adept at shedding layers of celebrity skin, and Bowie, after a bumpy start, parlayed his cunning into vast wealth and artistic respect. I remember in November of 1974 when a bunch of college friends were in lavish costumes, thinking that the Bowie show they were set to attend in Landover, MD would be a glam-fest, an event at which they intended to get completely loaded and lampoon what they assumed would be a glitter-queen audience. Bowie had moved on, though, introducing his Philly Soul period, and the fellows were a bit sheepish the next day. I think their musical taste leaned more to the Eagles and Wings, but maybe that’s a little mean. I was invited along, but had to work that night—it was a spontaneous decision to make the trek—much to my regret.

It wasn’t until the spring of 1978 that I saw Bowie live—also in Landover at the Capital Centre—when he was on the American leg of his tour supporting the superb Berlin-era record Heroes. I can’t remember who was driving that night, but we weren’t in too much of a hurry, figuring the opening act would hold things up, but as it happened when we arrived inside the venue, before even finding our seats, Bowie began the set with “Heroes,” and I stood transfixed, while less enthusiastic friends tried to hurry me along. It was a magnificent concert and Bowie, although supposedly junked-up at the time, was nearly flawless, with exceptional renditions of “Station to Station,” “Joe the Lion,” “Soul Love,” “Golden Years,” “Always Crashing in the Same Car” and “Sound and Vision.” Can’t remember if I was merely stoned, or had dropped some acid, but while Bowie was in complete control on stage, when I hit the john during the intermission it was a crazy scene, as men and women, boys and girls, were barfing in the sinks, unabashedly shooting up, chugging Big Gulp beers and slipping and sliding as if on a ice rink that was really the bathroom floor.

In any case, I wonder if Martin Amis even remembers his article, which opened with words that would now be accompanied by a “trigger warning.” He wrote: “When Glam-Rock superstar David Bowie flounced on to the Hammersmith Odeon stage last Monday night, recognisably male and not even partially naked, it seemed we would be denied the phenomenon-of-our-times spectacle which your reporter was banking on.”

Then again, it’s quite unlikely that Amis is among the 21,000 paid subscribers of the chronically underfunded New Statesman, and is more suited these days to fussing with a grandchild than reading Tweets linking to 42-year-old essays.