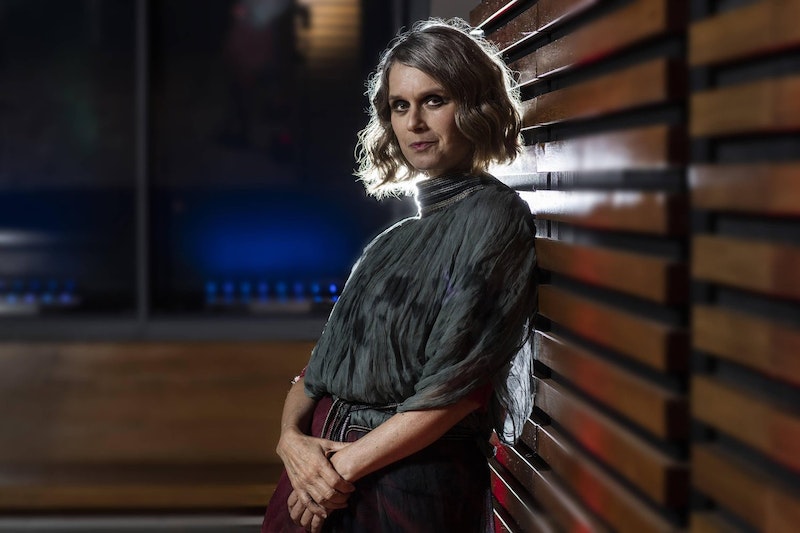 Electronic music is a genre mostly defined by how the noises are produced, rather than by any particular sound. As a result, the variety of random noises that can be lumped under the umbrella term is spectacularly large, from ambient wallpaper to industrial dance to arty theramins for soundtracks. So if the recent releases below don't make sense together, blame the computers, not me.

Argentine singer/songwriter Juana Molina's music is sometimes characterized as indietronic, and it's a label that fits her latest album well. She pairs wispy naïf vocals with fey lyrical melodies that slide back and forth between acoustic and electronic bits. "Cálculos y oráculos" wanders into ambient throbs under Molina's voice; it comes across like Julie London singing from inside a gently mewing mainframe. "Los pies helados" has a country twang set against extremely processed vocals, while "Cosoco" hits a cheery pop strut with Latin textures that recall Molina's father's legacy as a tango singer. The precise goofiness of the electronic soundscapes make Molina sound immaculate and childlike, orchestrating a carefully cracked perfection.

Electronica is often associated with alienation and artificiality, but Molina uses it to express fragile idiosyncratic and sincerity—Brian Wilson or Syd Barrett turned into bytes. Molina's a bit too precious and predictable to really hold up to those predecessors. But while Halo isn't an eclectic genius album, it's a very enjoyable computer enhancement of the genre.

As part of Chicago's footwork scene, Jlin is one of the better-known practitioners of a not especially well-known genre. She's worked with RP Boo, who's one of my favorite living musicians, but her music is very different from his joyfully repetitive dance tracks for the broken-limbed. Black Origami is more insular and contained—each track feels like it's been carefully assembled out of splashes of beats and vivisected samples. Footwork's trademark reiterations are in place, but layered on top of each other and twisted around, folded up, and sculpted—the origami is a lovely metaphor for the album itself. "Carbon 7 (161)" is as characteristic a track as any. It opens with a series of thumb-pianoesque repeating notes, throws in itchy snares and a receding sci-fi sound effect, and adds a chipmunk style voice garbling inaudible rhythmic yodels. There’s a buzzer and what sounds like chimes. It's danceable in the abstract; a club track put together by too many-legged aliens from some vague blueprint century after the earth implodes. Similarly, "Hatshepsut" is a marching band disassembled, with drums rolling and then fracturing apart and the horns trying to start up and being stifled by attacking nanomachines, which re-jigger them into Eastern gongs. It's a challenging album that grows on you as it takes your head apart.

Khristopher Reinshagen is the founder of Nostilevo, a wonderful record label that specializes in experimental electronica akin to concrete being dragged by dirty robots across your eardrums. Dominati Symbols is on Opal Cassettes, but it’s true to that Nostilevo aesthetic; listening to the tape is like wandering through a slowly disintegrating industrial factory. Distorted laser blasts skitter across rusting machinery, generating piercing echoes and ominous piles of twisted detritus. "Spring's Dance" doesn’t sound like spring or a dance, but rather steel cables disconnecting and snapping back quasi-rhythmically. It’s surprisingly soothing, if you enjoy the sensation of having cyclopean pistons dropping upon you from a great height. If Molina's work is music enhanced with electronics, and Jlin's is music made with electronics, this is electronics from which most of the music has been resolutely hammered out, leaving pulses of noise and irritating scratching feedback. The only way it could be more delightfully unlistenable is if it were just a single piercing wail for 30 minutes.