The Defeat of Sorrow 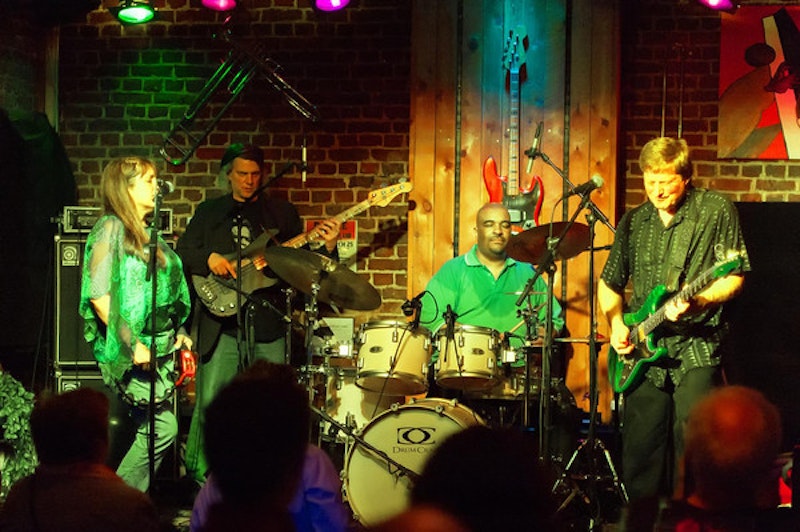 The blues at its best maps an emotional terrain of tumult, fully exploring the depths of the human heart. In the words of Ralph Ellison, it is the “biographical chronicle of pain expressed lyrically.” Albert Murray made a crucial addition to that definition in his book, Stomping on the Blues. The blues is not about drowning your sorrow, or drowning in sorrow, it is about the defeat of sorrow. It’s a musical form that expresses the pendulum swing between the high of ecstasy and the low of agony.

Dave Weld and the Imperial Flames, a Chicago-based blues band, reaches the mountain heights and valley depths in its latest record, Slip Into a Dream (Delmark Records).

The emotional intensity of Weld and his band is evident from the opening, title track. Weld shares vocals with Monica Myhre. Together, Weld’s smoky howl and Myhre’s sultry serenade, form a duet of passion, pain, and the incalculable longing people feel when they want to “lay next” to the one on their mind. Dave Kaye keeps a bass line groove lifted form the best of R&B, and Jeff Taylor, on the drums, lays a foundation right for dancing and for Weld’s scorching guitar solos and fills. The highlight of many songs on Slip Into a Dream is Weld’s controlled frenzy of blues-meets-rock lead licks. “Sweet Rockin’ Soul” follows the title track, and it contains all the same elements, but Weld, and company, are in full aggression—an attack mode that gives the impression they’re playing for survival.

Weld located an energy source early in his career sufficient to surge through an entire career. He went through the boot camp instruction of learning how to play with blues legends like Detroit Junior, Eddie Shaw, Otis Rush, and Hound Dog Taylor. One of Weld’s old friends shows up on Slip Into a Dream, in all his harp glory, Bobby Rush. Sax Gordon, who’s recorded with Solomon Burke and Sam Moore, among others, also lends his talent.

Gordon is particularly strong on “Take Me Back,” Weld’s ode to earlier decades of the Chicago blues scene. He sings with an impassioned growl matched only by the rough beauty of Myhre’s vocal. When Weld’s guitar cuts through the middle of the song, you can almost smell the sweat and see the smoke in an old blues club where romances are made, hearts are broken, and careers are earned.

Weld, Myhre, and their bandmates wrote all the songs on Slip Into a Dream, save for a spirited cover of J.B. Hutto’s “20 Percent Alcohol.” The songs maintain a consistent rhythm to invite the listener to slip into Slip Into a Dream as effortlessly as one falls asleep after a hard day’s work, but they also have enough variety to rescue them from the redundancy that often damages the quality of blues records. That there are three vocalists of nearly equal strength—Weld and Myhre, and the drummer Jeff Taylor—provides the band an ability to delightfully surprise the audience. Taylor is tender and tough on the vocal for his own mid-tempo pleaser, “Dorothy Mae.”

Dave Weld and the Imperial Flames regularly play the blues clubs of the Chicago area, but they also light up audiences at festivals, sharing the stage with the likes of Taj Mahal, Shemekia Copeland, and Buddy Guy. The current American music scene, with the exception of The Black Keys, Jack White, and a few others, has largely abandoned its blues tradition. Weld’s vocals, crafty guitar work, along with the groove in the pocket from Kaye and Taylor will make even the most cynical listener stand up. Myhre’s vocal contribution is like a shot with your beer—something that stands strongly on its own, but also enhances what is already there.

—David Masciotra is the author of Mellencamp: American Troubadour, and Metallica (a 33 1/3 book).