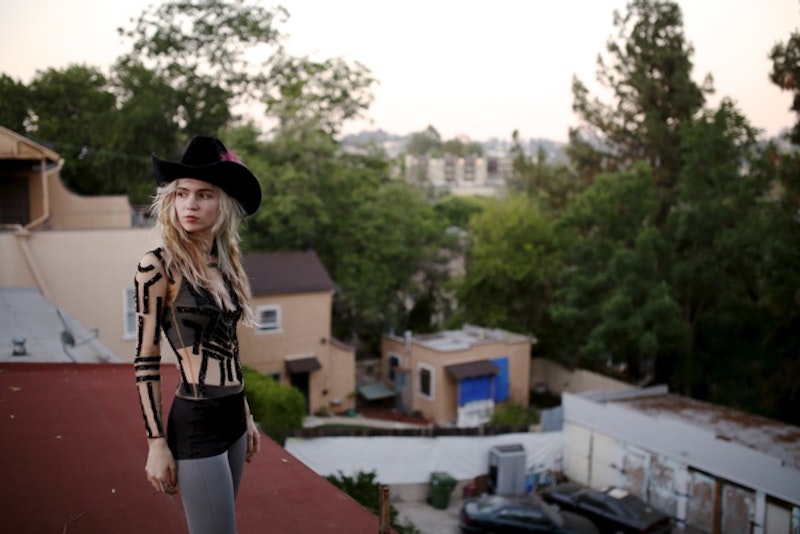 No chorus, all verses—but you know, that’s all right. On “White Gloves” (Night Time Stories/Late Night Tales), Houston’s Khruangbin dab at wet eyes on the way down an endless hallway unencumbered by doorways or alcoves, moving along at a bummed-out strut; the drums feel vaguely African, the guitar work gorgeously appointed, the vocal lines sub-Motown in a beguiling way. Is that a strut, or one of those Hollywood devices where the hero appears to be advancing in a dream-state without moving his feet? And: isn’t this what everyone wants music to be like? Dualistic, contradictory, juggling moods like premature grapefruits? Anyhow, the hallway empties into a small bar/lounge where the bartender is thoughtful, attentive, and happy to debate the merits of Dark City as you sip your way towards a blackout.

Jason Crumer, “Zeal of a Convert”

The appeal of what Baltimore-based noise artist Jason Crumer does can often be difficult to quantify or qualify, because his music isn’t necessarily immediate, and in this era, the immediate is valued, even praised. “Zeal of a Convert,” from the forthcoming Stare at the Devil LP (Depravity), is no different. It’s a bit like watching a talented graffiti artist working over a subway car in whites, silvers, grays, and blacks and realizing that while separate aspects of the work are coherent, a throughline or larger message is evasive. So what is “Zeal”? At first it’s a groaning suggestion of physical industry and zombified onanism, then atonal noise goaded from steel, then a haywire distortion of consciousness, then a blend of the previous three states. Or maybe, just maybe, it isn’t; and I’m fully willing to anticipate other personal interpretations over time, as I continue to live with and digest “Zeal” as standalone and as part of its wider context.

Any impending resuscitation of the Mega Man video game franchise should factor in soundtrack consultation from Toronto’s Grimes. With “Kill V. Maim,” she impressively summons that series’ irresistible contradictions: the Disneyfied pop sparkle limed with cutie-pie dangers, Industrial Light & Magic spectacle, self-contained spheres of menace and wonder one must overcome through pluck and ingenuity. So much so, in fact, that the bedazzled may miss the helium-voiced satire seared into its lyrical personae, a bizarro-world take down of male rock star megalomania gel-slicked in cheerleader rhetoric that would either make Gwen Stefani proud, or profoundly envious.