Montage of Heck: The Home Recordings is an overpriced disappointment. 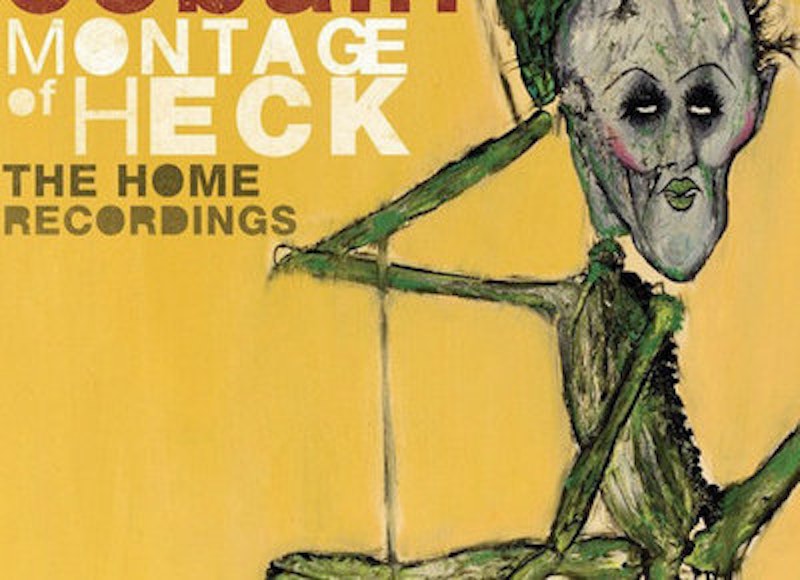 The mega-super-ultra-deluxe edition of Kurt Cobain: Montage of Heck—which is housed in a fucking jigsaw puzzle—is plastered with a sticker advertising “the Astonishing Recording of AND I LOVE HER.” It’s hardly astonishing: it’s not even a complete cover. And I can’t be the only person who was disappointed that Cobain covered a Paul McCartney song rather than something by John Lennon. In The Guardian, Alexis Petridis wrote: “The one thing the album is not, [Brett] Morgen maintains, is ‘scraps and insignificant discarded material.’ The latter is a statement that rings in your ears through large chunks of the Montage of Heck soundtrack, which could no more obviously be scraps and insignificant discarded material if the sleeve notes revealed they’d been sourced from a cassette labeled ‘SCRAPS AND INSIGNIFICANT DISCARDED MATERIAL: PS UNDER NO CIRCUMSTANCES RELEASE AFTER MY DEATH PLS. SIGNED K COBAIN.’”

I don’t agree that Montage of Heck or its attendant Kurt Cobain “solo album,” The Home Recordings, is invasive or should’ve been left in the vault. The guy is dead, and Nirvana is classic rock, an evergreen band and brand that’ll be ubiquitous until the collapse of Western civilization. The only product that came close to crossing the line were his heavily curated and abridged Journals, released in 2003. But again, he’s dead. Who cares?

His daughter Frances Bean, you might say. But she worked closely with director Morgen on Montage of Heck, and gave him carte blanche with her father’s archives and final cut on the film. So this isn’t a Nick Broomfield Kurt & Courtney situation, and Tom Grant is not involved. This is a Courtney/Frances-approved project, and Frances’ approval holds the ultimate weight. That said, the deluxe edition of The Home Recordings is a profoundly depressing listening experience. This isn’t a collection of scraps; it’s a box of bones. It’s not that his bedroom stoner experiments were never intended for release, it’s that the material is shitty. I would love an Ariel Pink-style Cobain solo album full of dusty gems, but with each new Nirvana reissue or greatest hits, we’re reminded how little Cobain left to be discovered. Many of the pieces included here, like “Burn the Rain,” “Letters to Frances,” “Retreat,” and the “astonishing” (please) Beatles cover “And I Love Her” were already featured in the Montage of Heck movie, leaving little left to dig into and dissect here, even on the 31-track deluxe edition. The tracks that David Fricke pumped up in a promo interview with Morgen a couple of months ago—“She Only Lies,” “Poison’s Gone,” and “You Can’t Change Me/Burn My Britches/Something in the Way (demo)”—are disappointing. The demos of “Frances Farmer,” “Been a Son,” and “Sappy” aren’t worth mentioning—they’re napkin sketches at best.

The one holy grail piece is the “Do Re Mi” medley at the very end, a 10-minute 4-track recording of Cobain cycling through the verses and choruses of his legendary last song, singing gibberish at first, without a trace of the final melody, but by the end, we hear him reach that heavenly falsetto refrain of “Do Re Mi” hardcore fans have known for 11 years. Its inclusion justifies The Home Recordings’ release, because we get to hear Cobain write his final song, just as we got to hear Dave Grohl show Cobain the riff to “Scentless Apprentice” on the With the Lights Out box set, and hear them finish the song in 10 minutes at a 1992 rehearsal. That demo remains an amazing listen, and this “Do Re Mi” medley is powerful but ultimately draining, and because it’s a “work tape,” it contains none of the grace of the finished demo, until that final minute when Cobain mines the melody we’ve known now since 2004.