Why does Jay Z get a free pass? 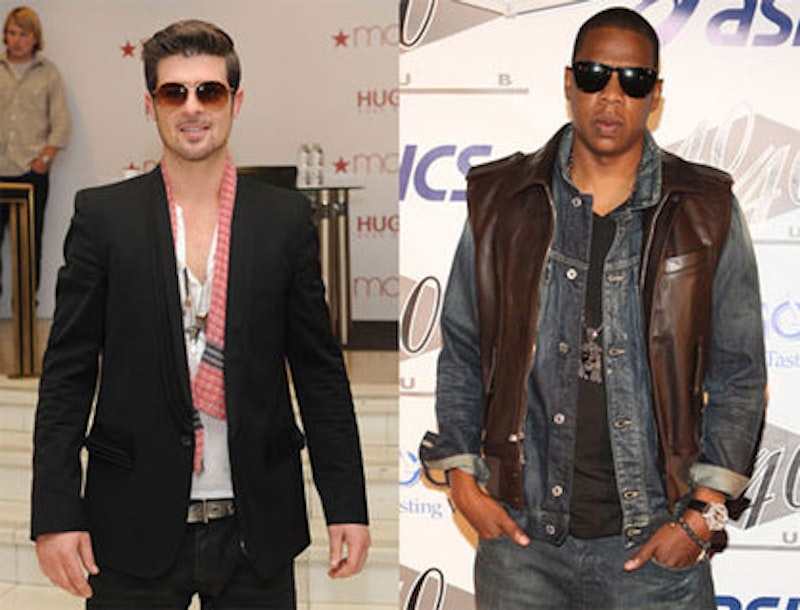 People hate Robin Thicke with an intensity I thought was reserved for terrorists and Anne Hathaway. Thicke, also known as the “Poster Boy for Misogyny,” was blasted by a swarm of Twitter users during a VH1-hosted Q&A session. The television network apparently thought it would be a great idea for viewers to generate their own questions during the interview. All they had to do was tag their tweets with #AskThicke. Here are the results:

@MycroftLuvzCake: “#AskThicke do u gel ur hair with the grease from your own personality?”

@fowlm: “If your dad wasn't Alan Thicke what would have been your first choice for a fast food chain to work at? #AskThicke”

@LaurenHarsh1: “#AskThicke If one of your songs played in a forest and no one was around to hear it would it still be sexist and gross?”

@TootingBaby: “The world my kids will grow up in is less safe because of Blurred Lines. How can you fix that @RobinThicke @Pharell? Delete it? #AskThicke”

All this anger is misplaced. “Blurred Lines” is hardly the definitive misogynistic anthem that certain groups are claiming it to be. People fixate on the (admittedly creepy) chorus, when Thicke repeats, “I know you want it.” But what about the lines “That man is not your maker,” “You’re far from plastic,” and “you don’t need no papers”? “Blurred Lines” is far from a feminist jam, but it’s not an outright attack on women, either. The vitriol saved for Thicke should be more evenly dispersed: why is he the only pop star being singled out for sexist lyrics?

The overwhelmingly negative reaction to “Blurred Lines” highlights a double standard in society: while Thicke is being crucified on social media, Jay Z is declared “American royalty.” The entrepreneur/rapper is publicly adored despite a career built on sexism. You’d be hard pressed to find one of his songs that doesn’t include the word “bitch.”

He doesn’t stop at sexism, though. “Girls, Girls, Girls” is also blatantly racist. He raps: “I got this Indian Squaw, the day that I met her/Asked her what tribe she with: red dot or feather?” He later accuses his “Chinese chick” of bootlegging his albums, because that’s just such a Chinese thing to do.

“Heart of the City,” produced by Kanye West, is no better. He leads with homophobia (“faggots hate when you getting money like athletes”) and then gradually shifts to sexism (“Males shouldn’t be jealous, that’s a female trait”). At least he’s not promoting date rape like “Blurred Lines,” right? Wrong. In fact, Jay Z does it far more frankly. There’s little ambiguity in these lines: “Get a couple chicks, get ‘em to try to do E/ Hopefully they’ll menage before I reach my garage.”

These two songs appear on his 2001 album The Blueprint, which is widely considered a classic record. It received perfect scores from AllMusic, The Source, USA Today, Vibe, and XXL. Pitchfork Media ranked it as the fifth best album of the decade, calling it a “plush defining statement from hip-hop's last great personality.” Entertainment Weekly labeled Jay Z as “one of the greatest poets to ever pick up a mic.”

No controversy? No backlash? Nope, for whatever reason, Jay Z is pop music’s David Ortiz: even though the Boston slugger was caught in the steroids colossus, everyone still loves him. He gets a free pass. What, did people not care about misogyny in 2001? Is there a statute of limitations on sexism?

If you want to call Robin Thicke a sexist pig, fine by me, but at least be consistent. He’s no more sexist then Jay Z, Bob Dylan, Drake, or The Rolling Stones.