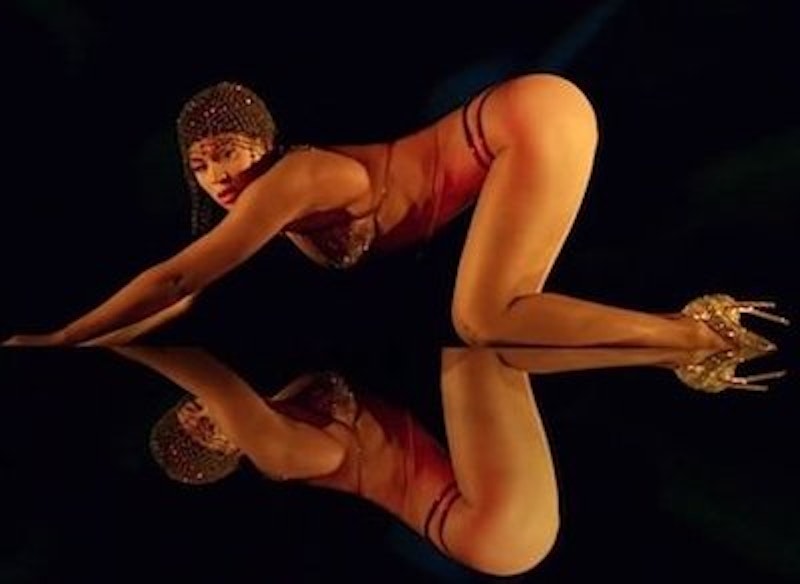 From the barely concealed carnal metaphors of the blues to the directness of Marvin Gaye on through Prince and R. Kelly, R&B singers have always played a crucial role in steaming up pop. Right now, there is no dominant male R&B singer with a lock on charts and hearts, so all the boys are looking for any edge they can find in a competitive market, meaning that injecting increasing levels of sexuality into their music plays an increasingly important role. That’s not only true for males: Beyonce’s latest album was by the far the most explicit of her career and the most applauded. It’s not causation, but it’s definitely correlation.

Beyonce isn’t the only data point: most of the genre’s young, talked-about male cohort—Ty Dolla Sign, Teefli, Tory Lanez, the Weeknd—are strictly NC-17, and this puts the older guard in a tight spot. Do they start adding more lewd specifics, like Usher? Do they stick to their guns, meaning they will be ignored by radio (except for John Legend) and most music publications? Or do they exist in some awkward middle ground, like Robin Thicke and Justin Timberlake, who don’t have much lyrical sexuality, but put topless women in their videos?

Recently released albums from Joe and Trey Songz show two different possibilities for mid-career R&B singers. Joe, a veteran releasing his 11th album, sticks to his guns and sounds out of place. Maybe you saw this coming—back in 1997, Joe recorded one of his biggest hits, “Don’t Wanna Be A Player,” which announced his attention to change his lifestyle. (Or did it? When Big Pun interpolated the song a year later on the standout “Still Not A Player,” he rapped, “I’m not a player, I just fuck a lot.”) There is sex on Joe’s Bridges; this is R&B. But in one song, Joe and his partner take a break from the bedroom to go dancing. Another song is titled “Sex Ain’t A Weapon,” a sentiment that the Weeknd would find laughable, if he ever allowed himself to laugh.

Unfortunately for Joe, it’s hard to stand out with throwbacks of this variety—especially now, between the revival of disco and the burgeoning number of soul singers on small labels. What makes Joe’s choices on Bridges more frustrating is that he’s most compelling when he sounds like he’s been listening to the kids. “Dilemma,” a song full of indecision and tension, has a very contemporary, cavernous bass, the kind that sounds good smashing its way out of a car radio. “I promised I’d be faithful, I’m tryin’ to let you down graceful,” sings Joe. He knows that someone’s “gonna smile” and someone’s “gonna cry” when he resolves his situation, but he doesn’t care, he will emerge unscathed. It’s heartless—and riveting.

Trey Songz also spends most of his time caught between two or more lovers, but in contrast to Joe, he does not see this as a dilemma—it’s more like the natural state of the world. Trigga is the sixth album from Songz, and he’s always loved singing about kinky stuff. Correspondingly, his sound is radio ready, even if the songs may not be. He’s got an impressive falsetto, but Trigga rarely speeds up or changes sound, and at a certain point, the combination of endless libido, synthesizers, and airy hip-hop percussion—skipping, flat high beats mixed with thunderous low ones—begins to blend together.

Three star producers each contribute a track on the album: DJ Mustard, Mike Will Made It, and Dun Deal. The first two, despite their impressive resumes, both strike out with their beats. Mustard’s “Na Na” is inescapable on the airwaves, but also ineffective—repetitive but not sticky, low on propulsion. Mike Will Made It turned in one of the toughest, most slippery beats of the year on Future’s “Move That Dope;” his work on Trigga, “Late Night,” sounds like it could have been made by any Atlanta producer.

Although the least well-known of this big three, Dun Deal gets Trigga’s opening song, “Cake,” and it’s one of the album’s cleverest tunes. (Deal has worked with R&B singers before—he put together “Get Ya Money,” which appeared on August Alsina’s Testimony, probably the strongest R&B album of the year so far.) The lyrics are wall-to-wall innuendo, but they also question a cliché idiom. “I don’t wanna play by the book, no rules,” sings our lothario. “They say you can’t have cake and eat it too/but ain’t that what you supposed to do?”

Even as Songz questions cliché, he embraces it wholeheartedly. “Foreign” and “Love Around The World,” both about wonderful ladies from other countries, build on the same conceit as Jason Derulo’s “Talk Dirty To Me”—or, if you want to reach further back, Ty Dolla’s “My Cabana.” Songz is enamored with the sex-enhancing potential of new technology several times on the album, but this is hardly novel; the singer Jaheim’s Appreciation Day, for example, from last year, included a song titled “Sexting.” “Sometimes bad is a good time,” Songz tells us on “Change Your Mind,” a turn of phrase that may be even older than “have your cake and eat it too.”

Just as “Dilemma” suggests a different, and more interesting, path for Joe, “Y.A.S.,” on which Songz croons about his mistakes, rather than his conquests, points a way for him to break out of his rut. He brings all his melodic gifts to bear, along with a pleasing verbal inversion, as he sings, “She ain’t got nothin’ good to say, so she ain’t gonna say nothin’/but this: you ain’t shit.” More than any other genre, R&B excels in the gap between message and delivery. “You ain’t shit” isn’t an expression most people like hearing, but in Songz’ capable hands, it would serenade a baby to sleep. He continues, “I guess I got used to hearing whatever I wanted to hear.” It’s a moment of self-realization where he acknowledges—and chooses to do nothing about—the myth he has created for himself.

Both these artists share a certain single-mindedness. Joe’s unwilling to be lewd, which also leads him to turn his back on the sounds of the present. Songz follows a different muse, telling us, “I got a reputation, good or bad so what? I gotta keep it up.” But when Joe and Songz confront their set behavioral patterns, it usually leads to more exciting music.