On a cutting remix of Lily Allen’s “URL Badman.” 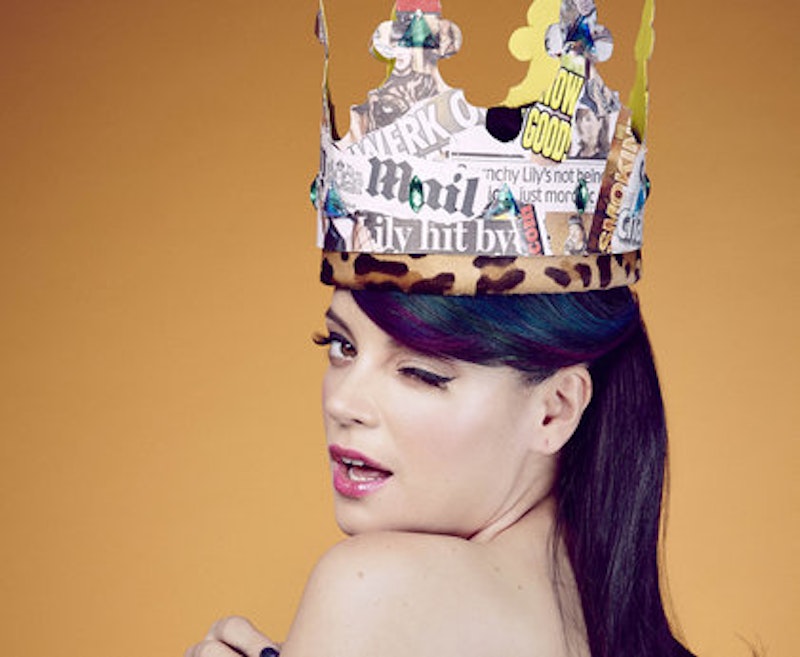 By now, reams of hypertext have been spilled over Lily Allen’s blithe, troll-spanking “URL Badman,” and I don’t have much in particular to add to the existing arias. The song is catchy, succinct, and damning in the inimitably vicious Allen tradition; pity about the rest of Sheezus, which I copped via iTunes upon release but haven’t felt compelled to make much time for.

The first time I Googled “URL Badman,” I stumbled upon this wicked extreme remix by Andy Hyutha Gaol, which resembles the real McCoy in the way a mid-1990s Aphex Twin remix of a Nine Inch Nails song resembles a Downward Spiral original.

Where Allen’s version is a strident, sweeping pop banger that sounds like half-a-million bucks blown in a posh London salon, Gaol’s deconstruction suggests like an illiterate idiot savant babbling madly over NES 8-bit soundtracks in a damp Edinburgh basement. Where Allen strove for airy, vicarious satire, Gaol broadcasts straight from the comment-section mouth of madness.

As this remix exquisitely demonstrates, the narcissistic, flailing-Id ramblings of bloggers and comment-section trolls are not markedly different than the random-phrase generator incoherence of spam emails. I like to imagine Gaol plumbing, repeatedly, for hours on end each time, the inkiest, ickiest sewers of the Internet for the raw nonsense scraps he would eventually super-collide into a sick sort of punter poetry—a porridge-thick tapestry of dialects and invective and pop-culture blarney so insane that it fails to communicate anything beyond its own right to exist.

Interlocking, blunt keyboard chords ricochets off of guitars that buzz like angry hornets—an addictive, Atari Teenage Riot cloying loop—and the madness gushes forth in an untraceable accent. Whoever posted this track was kind enough to make it a lyric video, so we get to try to wrap our brains around chestnuts like “like script kiddies lear to hack/just know their phone number” or “this gonna be benned & get some infringement to be black list” or the baffling “something about how to grow a country/now it gamling in their mouth’s with ecah peoples fate & wish.”

The billy-goat-gruff delivery of this tinfoil-hatted jabberwocky is a linguist’s wet dream, all broken two-by-four edge and manic diction that dispensed with the emphatic, oratory beats that a speech or one-sided conversation should aim for. This is distracting, until you remember that what you’re hearing is a dead-on parody of a paranoiac Wordpress rant. If you play this without reading along, the jagged, cocaine-mound prattle becomes just another jittery element in the sprained cortex flow of this remix. Everybody does the deluxe re-release dance a couple of months after an album like this drops, and if Allen’s got any artistic soul, she’ll co-opt Gaol’s perversion, post haste.