Mitski is Xiu Xiu as alt-rock. 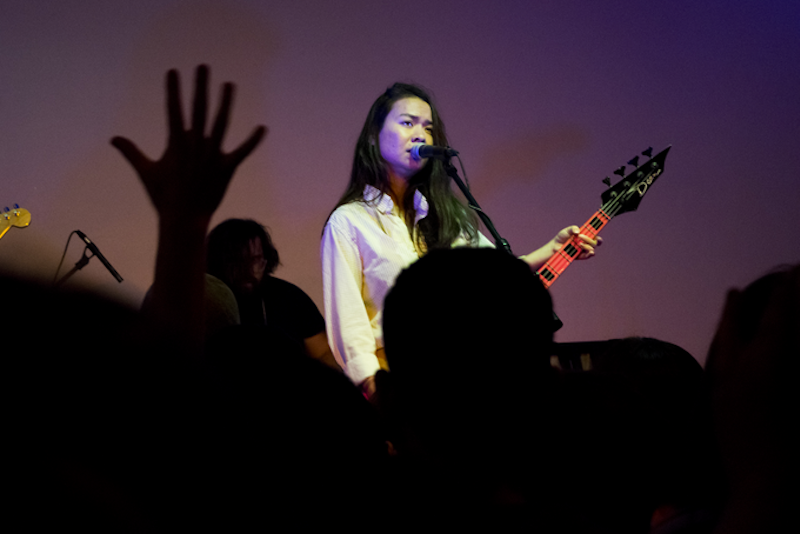 At the end of 2014, I bought Mitski's Bury Me at Makeout Creek blind on the strength of a friend’s glowing recommendation. He’s a man of few words, and it was the first time I’d ever heard him praise something so effusively, sparing no superlatives and imploring everyone to buy the record on Bandcamp and bask in it. The cult of Mitski is no press creation—Bury Me at Makeout Creek came out after everyone’s 2014 year-end lists had already been submitted. Before anyone could declare her the next big thing, people were crying at her concerts and talking about the record in reverent tones, and it seemed like every other person who was lucky enough to get into her capacity club shows had intense religious experiences. Okay, maybe that’s a bit much, and Mitski is well aware of the cult of personality boomerang. She told Pitchfork recently, “My biggest fear is that I will recklessly be made out to be a mythical god by the press, and then one day, it will come out that I am actually just a regular person—and people will feel resentment. You see that in Jennifer Lawrence or Anne Hathaway—one minute everyone loves them, and then the next minute it just becomes trendy to hate them. That scares me so much.”

Overexposure sink actresses like Jennifer Lawrence and Anne Hathaway, who are built up and then torn down to make everyone feel better about themselves. Mitski (last name Miyawaski) is aware of the pitfalls that follow the rush of hype and expectations of a slow-burn sleeper hit of an album. Luckily, she’s amassed a pure congregation mostly by word of mouth, and only now, with her fourth album Puberty 2, the press catches up. As on Bury Me at Makeout Creek, the sound design and the production is extremely detailed and remarkably abrasive: the first song, “Happy,” starts off like Xiu Xiu, with a pulsing and distorted drum machine and a droning keyboard tone. Mitski’s vocals enter, along with the same sort of twisted programming and sound manipulation found on Xiu Xiu’s The Air Force. Mitski’s singing remains somber throughout much of the record, and it all blends together at first. If this doesn’t hit you like the Death Star on first listen, it might take a while to crack. If you’re not connecting, Mitski’s songs sound liturgical and plod along, despite the very deliberate production.

Only when her voice and acoustic guitar, distorted into razorwire, come completely unhinged on “My Body’s Made of Crushed Little Stars” does it hit me, the urgency and desperation that she inspires in so many of her fans. It’s a thrilling and wildly insane song, with a gorgeously shredded vocal, and under two minutes. NPR said recently that “Online, Mitski is the patron saint of #sadgirls, the subculture that uses ironic self-deprecation as a way of dealing with depression and vulnerability… Sadgirls have a strong sense of their own cosmic insignificance and understate their problems accordingly. Mitski's ‘My Body's Made Of Crushed Little Stars’ could be their anthem.” More than anything, Mitski's music makes me think of Xiu Xiu as alt rock. Take that how you will.