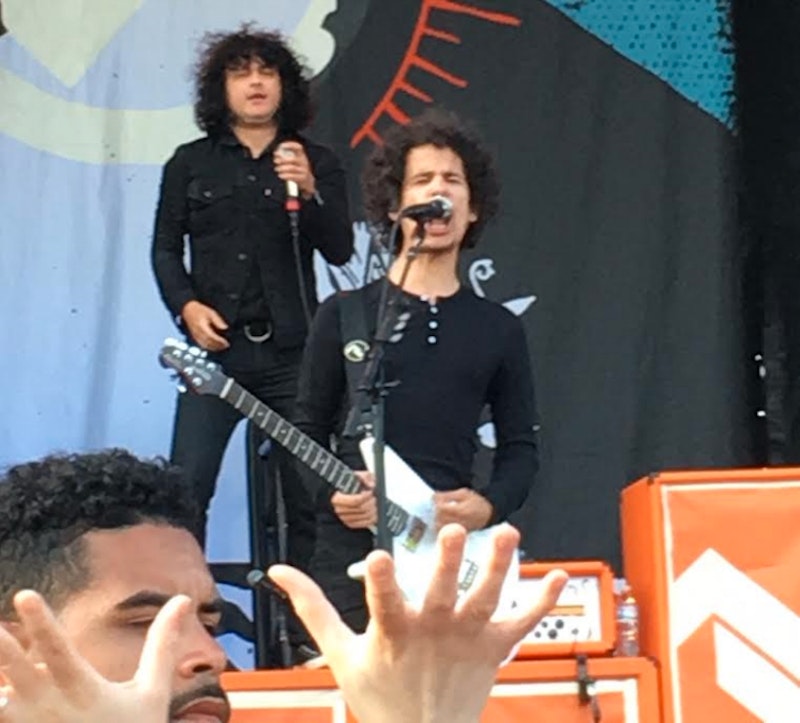 Reunite at your own risk. Everyone will hold it against you. When At the Drive-In announced at the beginning of the year that’d they be going on an extensive world tour and recording a new album, it was hard not to be skeptical. I’ve been a fan since I was 12, and when they initially got back together for a run of festival shows in 2012, all hope was dashed that this would be anything but a phoned-in cash-grab. Can you blame them? Of course not—but their breakup in 2001 was acrimonious, with plenty of sniping and passive aggressive insults thrown between members in the press in the years since. How was this going to go over? Well, lousy—the footage I saw of their Coachella set was miserable: Omar Rodriguez, despondent over the sudden loss of his mother, stood with his back to the audience playing his parts in place. Cedric Bixler and the rest of the band did their best to hold it down, but even if everyone was getting along, a band like At the Drive-In could not exist into middle age. The sheer velocity of their performances in the 1990s and early-aughts is not renewable. You can’t shred your voice and throw yourself around like a rag doll on stage and do hard drugs and play like they did into your 30s and 40s. Watch this video of a 1999 show in Chicago: it’s not a coordinated attack, this is a bomber plane exploding mid-flight.

Graced with tickets from my girlfriend’s mother, we ended up at the Rock on the Range Festival in Columbus, Ohio last month. It’s held every year in a soccer stadium and its parking lot, and it’s the scourge of everyone living within a five-mile radius. The place was a temple of butt rock, burnouts making the pilgrimage to Mapfre Stadium to drink in blazing heat, throw up in oil drums, and take so much acid that you have to sit down in the middle of the pit. At the Drive-In were headlining the second stage in the parking lot, and we showed up about an hour before they played. Securing a spot up close was easy, and worth it to endure the crowd moshing to a simulcast of Bring Me the Horizon playing inside the stadium. When ATDI emerged, the bodies started going up. Through their abbreviated eight song set (Cedric had nearly lost his voice and made it through via an EMT-administered cortisone shot), the crowd-surfing never let up, and the kind of mindless and violent and inauthentic slam dancing that the band would protest years ago went by unchecked. Cedric brayed at the crowd of Big Day Out 2001 and called them sheep over and over again for moshing, and they left the stage after three songs. Fifteen years later, people are taking selfies of themselves crowd-surfing, and all Cedric has to say is “Ain’t that some shit?”

But Cedric and Omar broke up At the Drive-In in 2001 because they were bored, right? Weren’t the other three members—especially Jim Ward—totally averse to their prog fascination, and didn’t the story go that Cedric and Omar wanted their next record to sound like Pink Floyd’s Piper at the Gates of Dawn, and Jim wanted it to sound like Weezer? The Mars Volta made sense—that was a band that could’ve grown comfortably into middle and old age with dignity and little cognitive dissonance. But the love for the handful of records and videotaped bootlegs that At the Drive-In left behind has never abated, so here we are. I didn’t plan on seeing them in D.C. the other night, but after that abbreviated festival set (made up exclusively of songs from Relationship of Command) I had to get my fix. I had to see them play “Pickpocket,” “Lopsided,” “Napoleon Solo,” “Proxima Centauri,” and “Shaking Hand Incision.” The show at the 9:30 Club on Tuesday was twice and long and it had some of those songs, a show I’d been dreaming of for 11 years. But it’s too little, too late. I don’t begrudge them at all, don’t care if they’re sincere or not, if this is what they want to do, great. They deserve it. Cedric thanked the audience for “still being here 16 years later,” and he promised they’d come back with a new record eventually. But they’re not The Police or the Pixies: the volatility and the physical exertion of 16 years ago just isn’t possible anymore. There was a second show planned for Wednesday night, but the band had to cancel at the last minute because Cedric had lost his voice again. You might think you’re dying to see Hüsker Dü get back together, and you might be daydreaming about where Elliott Smith would be in his 40s and 50s. But these belated and forced reunions will leave a bad taste in your mouth. At the Drive-In won’t walk off on principle anymore—they close with “One Armed Scissor,” and they’re coming to the audience, giving them what they think they want, instead of assaulting them. It doesn’t tarnish what was, but seeing At the Drive-In now just feels like a poke in the chest, and a bad reminder of what is lost forever.