The Magic of Deerhoof 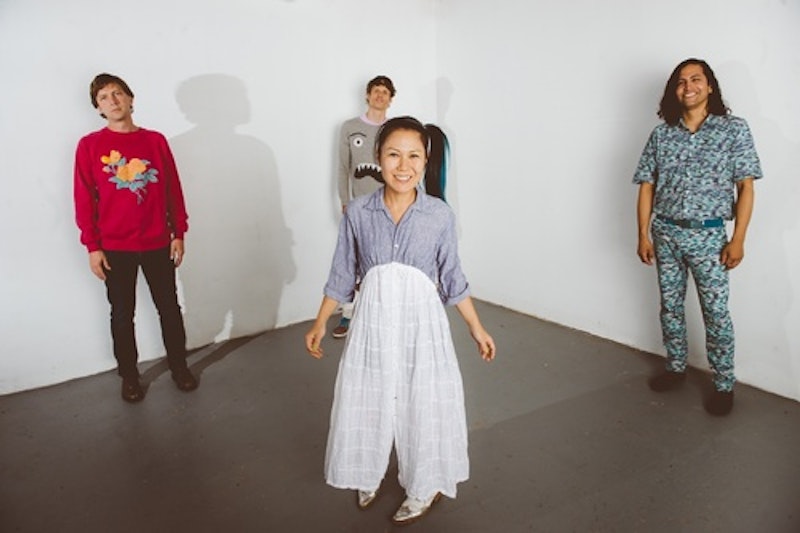 Deerhoof are in many ways the model band: idiosyncratic, creatively consistent throughout a 22-year career, self-sufficient, responsible and independent in a world full of lecherous publicists, managers, agents, and clueless wannabes. Like The Beatles, each member is distinctive and inextricable, and their stability and lack of angst or personal turmoil is comforting when you’re inundated with personal anguish and trauma from all levels of show business. They’re indie rock’s North Star. We can count on Deerhoof every two years to deliver a new album and tour the world. “We’d love to visit your towns,” sings Satomi Matsuzaki on “Acceptance Speech,” the second single from their new album The Magic. Recorded in just six days last fall in Albuquerque, New Mexico, The Magic is fuzzier and scrappier than their recent albums, especially the heavily electronic Breakup Song and cinematic La Isla Bonita, but this is no break with the past or unnecessary reinvention.

Rather than repeating themselves, Deerhoof accumulate and synthesize what they’ve done in the past, growing muscles, never shedding skin. All these colors co-exist without going gray, and their dedication to preserving an identity while moving forward creatively is inspiring. Drummer Greg Saunier and guitarist John Dietrich mixed and mastered the record, and more than the riffs, the production and the sound design on Deerhoof’s records this decade have distinguished the band. Opener “The Devil and His Anarchic Surrealist Retinue” is a whip-crack flashback to the serrated riffs of songs past—“Spirit Ditties of No Tone,” “Flower,” “Come See the Duck”—and from there the record moves effortlessly between periods and poses and moves we know into something we don’t. The video for the first single “Debut," a track that sounds straight off of Breakup Song, shows the band at work in Albuquerque recording the song, operating out of what looks like a hotel room a conference hall (when you read “Recorded at The Fox Building” in the liner notes, you imagine a big warehouse or a chemical plant, not middle management). “Criminals of the Dream” begins with strains of gorgeous mellotron-esque synths, before blossoming into a dreamy, bittersweet ballad that is so instantly Deerhoof and utterly sui generis.

Ed Rodriguez, a member of the band since 2008, wrote an excellent piece for The Talkhouse last year in response to a typically overblown and clueless New York Times report from South By Southwest on how young bands are able to get by and potentially make a living through touring. It’s clear that the only people the Times interviewed were either trustafarians or suck suck suckers—bands that have been around for less than a year with 10 grand in unnecessary tour expenses because they’re paying someone to tell them what they should be doing. If you want to make a living out of it, your band has to operate as a business, and an obvious way to save money is reserving hotels months in advance, do as much managing and booking and promotion as you can yourself, and drive your own ship. He wrote, “I take issue with the media presenting these tales of ‘necessary’ financial woe to demonstrate this because I worry about the effect it may have on young musicians. It portrays obstacles that for the most part, these bands impose on themselves. That’s not how you have to do it.” Rodriguez outlines every member’s responsibilities, from booking flights and hotels, to accounting, to public correspondence, to renting and driving the van. The harmony between the practicality of their career and the childlike thrill and wonder of their music is always rejuvenating, a real blessing. The first club show I ever saw was Deerhoof at Baltimore’s Ottobar in January 2006, and they’ve played the Ottobar on nearly ever tour since. I’ll be seeing them for the fourth time there this Sunday.