The Best Artist in Popular Music Over the Last 40 Years

She sounds great at a biker bar or a children’s party. 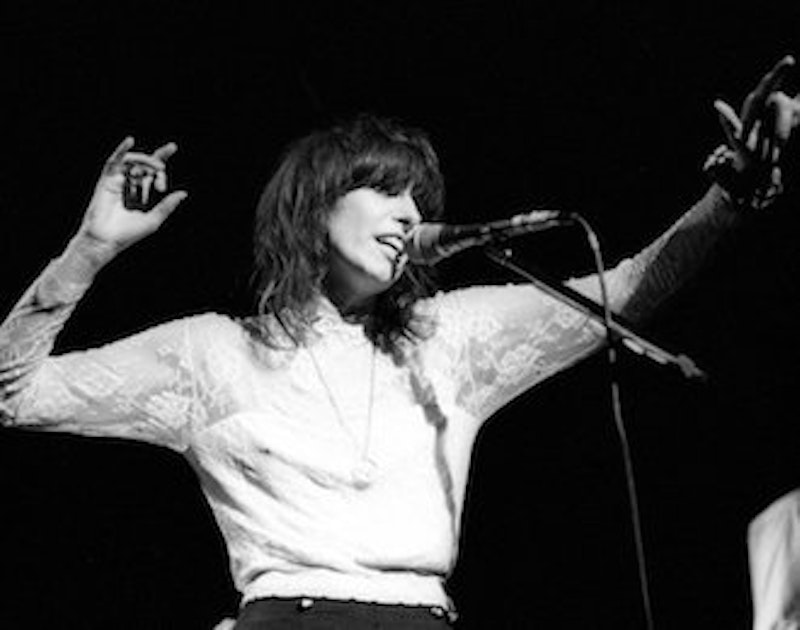 I’m just not up for politics this week, and anyway Trump’s court pick is slated to be simultaneous with the appearance of this column, so I guess that’ll have to be next time, if at all. From what I can tell, my head may well still be on vacation, and I’d rather smile vaguely this morning than think clearly, if that was ever a possibility.

So what I’ll do instead is tell you who I think is the best artist in popular music over the past forty years, or in the period of my adulthood, and why. Now you may be asking the ‘me’ in your head why you should give a damn what he thinks and where he gets off pontificating like that anyway. I will point out that (a) there is indeed a me in your head (deal with it), and (b) the me in your head, as in my own, is an expert, so you are rationally obliged to believe him, i.e. me, rather than yourself.

Be that as it may, it’s Chrissie Hynde. But before I kvell, let me tell you a story. I was living in London in 1984, writing for the music weekly Melody Maker. Following the overdose deaths of guitarist James Honeyman Scott and bassist Pete Farndon, the Pretenders had just released their third album, Learning to Crawl. MM’s editor, Allan Jones (who’s just published a great memoir of this period) had reviewed the album extremely negatively in the previous week’s issue, but he assigned me to cover the first show with the new band, at the Hammersmith Odeon, and talk to Chrissie briefly afterward. Then I was supposed to write a sizable review/feature.

As we yapped about it at the MM office, Jones ragged Hynde mercilessly. He said that Chrissie had just hired a new bunch of pretty boys to replace the dead ones, and actually the record was played by studio musicians. He said that the songs were bullshit, that she was just going through the motions, that she just wanted to pretend to be a big rock star and nothing else mattered. He said she’d sold out completely and that the first single, “Middle of the Road,” was a clear statement of her identity at that point.

Now, I was an extreme fanboy for the Pretenders, who I’d seen in DC on their first couple of American tours. I had a crush on Chrissie, whose voice and persona stretched from hyper-aggressive to ravishingly beautiful, a devastating combination that filled me with lust. Not only that, but I thought Learning to Crawlwas a great record (I still think so). I went to the gig, which like several Pretenders shows I saw over the years was one of the best concerts I’d ever attended; even if those new boys were sort of pretty, they were definitely playing the songs. After the encores I waved my pass around and ended up outside a dressing room. I knocked. A fairly-disheveled Chrissie answered. I took a step toward her and said “Melody Maker.” She slammed the door on my face. It literally bounced off my forehead. As I say, the disorientation persists to precisely this day.

At any rate, one thing that makes Chrissie Hynde unique is that range. When she first appeared, the idea of a leather-clad, guitar-slinging female rock star who could absolutely command a stage was quite fresh (though he contemporary Joan Jett was also providing a version), and she snarled through songs like “Bad Boys Get Spanked.” But also from the outset (on the self-titled debut that is one of rock’s greatest albums), she began to showcase that deep, intensely expressive vibrato. It’s an instrument that can handle beautiful slow songs like “I Go to Sleep” as perfectly as rockers like “Precious.” On the 10-or-so Pretenders albums and various solo and side projects, Hynde has shown the range of material that voice can handle, from reggae to rockabilly. And if, like a lot of aging rock stars, she puts out an album of standards, I’ll buy that too.

Chrissie sounds great rocking out. She sounds great doing “adult contemporary,” a style that, like punk and new wave, she helped invent (in the ‘70s, she worked at Vivienne Westwood’s SEX clothing store, wrote for New Music Express, and almost married Johnny Rotten). But she sounds great doing rockabilly or reggae as well. She can be middle of road, or pretty far off on the periphery; no artist or songwriter I can think of in the period, with the possible exception of Elvis Costello, has that sort of range.

She has been, as well, a sneakily innovative and sophisticated songwriter. From the very first, on songs such as “Kid” and “Brass in Pocket,” she ditched or distorted the verse/chorus form, exploring slow builds or circular structures. Her catalogue is one of the deepest, richest, most varied, and most distinctive bodies of writing in the history of pop music. The songs would be covered much more often by more artists, except that the Chrissie’s own renditions are definitive, inimitable, and incomparable.

Chrissie Hynde sounds great on a television ad or in a crack house. She sounds great at a biker bar or a children’s party. She’s a punk and a chanteuse and a rocker and ravisher. She wrote a rollicking autobiography. In short, she’s the man.