Render Unto Caesar What is Caesar's 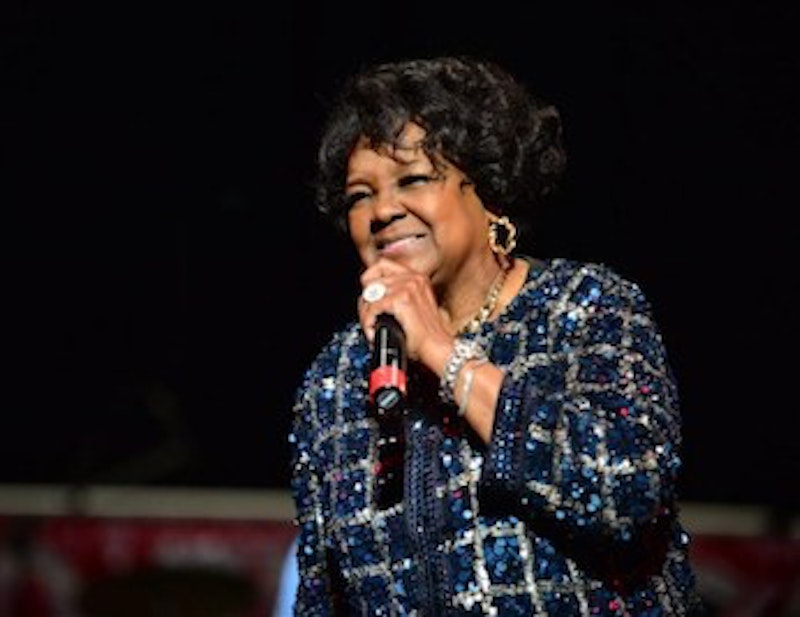 The lineup of performers at Aretha Franklin's funeral was mixed, but there was one whose presence no one ought to have questioned for a moment: Pastor Shirley Caesar, who turns 80 this week. Eulogizing the Queen of Soul, people competed to pour on the praise: Aretha was the voice of a generation, a century, a species. If that's true, then so is the Queen of Gospel, for Caesar is a performer of comparable scope and power, one of the greatest handful of singers American music has produced. I'm sure Aretha and Shirley listened to each other from the 1950s, and I imagine that the influence was mutual throughout. Then again, there's no mistaking either for the other, or indeed for anyone else.

Born and churched in Durham, North Carolina, Caesar started as a teenager, singing with Albertina Walker, Cassietta George, Inez Andrews, and Dorothy Norwood in the all-star group the Caravans. She came into her own as a solo in the 1960s: preaching sermons, leading choirs, and singing original songs as though she was on fire for the Lord, which she was. When Aretha first showed up, people described her performances as "unpredictable"; she seemed to be improvising all those sudden swoops and growls, though she was drawing on a traditional gospel vocabulary as well. Shirley is even more volatile and even bolder, and just as indescribably right.

She has never, as far as I can determine, recorded any non-religious music. That commitment limited her commercial potential in comparison to Aretha or even Mavis Staples, for example, but within gospel she has tremendous range. As well as sermons, she's recorded many story songs featuring suffering and loving mothers, prodigal sons, financial and health problems, ecstatic overcoming, love of God, and the impending rapture. Gospel itself is a syncretic form, influencing and influenced by country music ("King Heroin"), blues ("Pressing My Way"), rock ("No Coward Soldier"), and above all soul ("The World Didn't Give it to Me"), and I don't think anyone has explored all its elements more thoroughly or over a longer period.

As well as spiritual documents, the songs are also indices of the struggles of the community from which they emerge, and the human condition: poverty, illness, oppression, death. But they’re also prescriptions or demonstrations, strategies for resolving these conditions into a victorious transcendence. They accomplish this so palpably and immediately that you touch the hem of transcendence yourself as you listen, even if you don’t fully share the belief system from which it emerges. Caesar's best work is both parochial and universal, a resolution of body and soul.

Surveying her large catalogue, I strongly favor the recordings of the 1960s and 70s in which Caesar appears with choirs, often live in a church, so that you’re hearing the intense response of the audiences. No gospel recordings have ever used a mass choir to more dramatic effect, everything from reassurance ("Don't Be Afraid") to euphoria ("Another Day's Journey"), to the astonishing end-of-all-things clap of doom of "Millennial Reign" and "Tear Your Kingdom Down." That last one strips to the essence, just solo voice and choir, with claps and stomps.

And in all the astonishing performances listed below, I’d say, Pastor Shirley Caesar truly conveys the spirit; she gives you the sense that she's singing or preaching as something more than herself, pulling it in on a divine wavelength. I don't see how or why that would be literally true, but as I listen to "Bread of Heaven," for example, I can't resist the sense of real inspiration, in hyper-intense embodiment. She's not only expressing a theory of the nature of the universe, she's enacting it.

She's more, in other words, than a gospel singer. But Shirley Caesar might also be the greatest gospel singer who ever lived.