The Raw Bliss of Tongue Depressor

On Fiddle Music Vol. 2 by the New Haven, CT band. 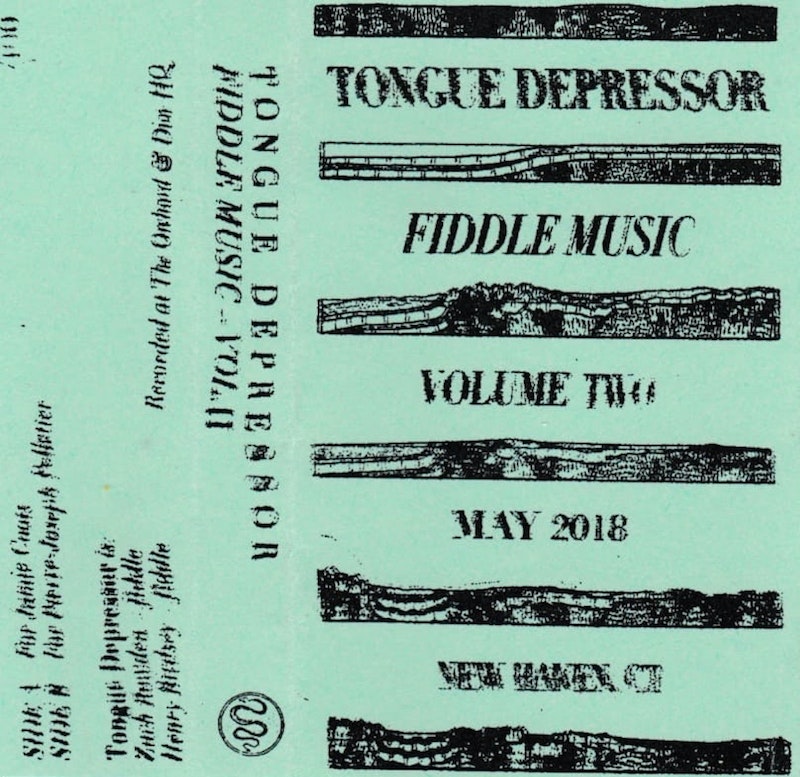 Fiddle Music Vol. 2 by New Haven's Tongue Depressor is grueling, which is a compliment. Two fiddles clashing, drifting in and out of drones, blurring the line between dissonance and beauty. Listening to this tape is the equivalent of rusty nails scraping against teeth. It's a slow burn with a grand reward. You have to pay close attention to what TD are doing or it'll slip right by.

My relationship with Zach Rowden's music is peculiar. After moving into the rowhouse where I currently reside, the only items were my bed (no sheets or pillow), a couple of instruments, and a shitty little boombox I’d purchased from a thrift store. My roommates hadn’t moved in and yet and I was too broke to buy booze. A friend loaned me a single tape to cure the boredom: Stare by Rowden (recorded by fellow fiddler Henry Birdsey in early 2017). I listened to it endlessly throughout the next week, intrigued by the unusual structure and freeform sounds that Rowden exorcised from the double bass. The instrument played against itself. A few months later, after witnessing an indescribably beautiful live performance at a local studio warehouse, I purchased a cassette copy of Fiddle Music Vol. 2. I loved this music.

Tongue Depressor isn’t for everyone. This becomes more evident each time I play the tape for my grandparents, attempting to divert their ears from the bingo announcer. But TD is for someone, perhaps even many. Especially in the strange musical city of Baltimore, the jagged edge of the irreplaceable East Coast experimental timbre. I love drone music because it allows me to slip away from the world’s anxieties and pressures. Drone music is more powerful than any drug I've taken, and the visual effects more vivid. And in my case, more addictive. It's slow and aching. Listening to drone music is pure, raw bliss.

I don't mean to clump Tongue Depressor into a genre because their music certainly transcends that. It's sound. All music is sound. Music doesn't need to be chord progressions, catchy hooks, or driving rhythms. Music is the world around you, the clashing sound waves, the echoes of the highway, birds whistling from the swaying tees and leaves rustling in the wind. I love this tape and remain excited for anything these fiddlers create in the near or distant future. Fans of Tony Conrad, Henry Flynt, Glenn Branca: you will not be disappointed.

You can check out a recent Baltimore set by Tongue Depressor here.