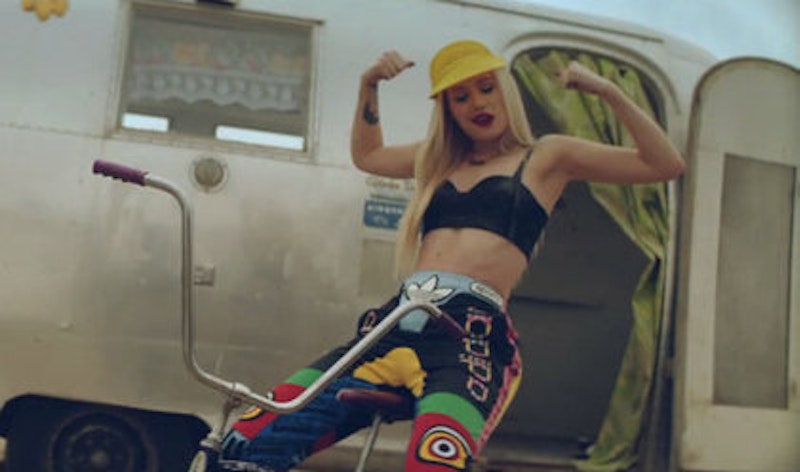 From Elvis to Miley Cyrus, it seems like the only way white people can interact with black music is through appropriation. The latest example of this tiresome American tradition is Iggy Azalea, a white woman who has broken chart records for female rappers and even hit the number one and number two spots on the Billboard Hot 100 simultaneously—a feat previously achieved only by the Beatles. "Iggy is… an heiress to white supremacy, the mix of unearned racial privilege and racial fetish that has historically made black music without black people big business," Travis L. Gosa writes at The Root, while Brittney Cooper points with disgust at Azalea's adoption of a Southern black accent.

"I maintain that there is no triumph and no celebration when we embrace a white girl who deliberately attempts to sound like a Black girl, in a culture where Black girls can’t get no love."

Gosa and Cooper aren't wrong, but it's worth pointing out that Azalea has, to some degree, anticipated their criticisms. The debut single and video from her album The New Classic deliberately rejects racial appropriation as a reading of her music. The video suggests that her connection to hip-hop is based, not on race, but on class.

Class is right there in the title of the song: "Work." The track starts with Azalea talking directly about working crap jobs.

"Two feet in a red dirt, school skirt
Sugar cane, back lane
3 jobs took years to save
But I got a ticket on that plane
People got a lot to say
But don't know shit bout where I was made
Or how many floors that I had to scrub
Just to make it past where I am from"

The video is in some ways even more directed; Azalea walks through a desert setting, passing by a woman taking in laundry, a spitting, grizzled guy in a trucker's cap, trucks, and a trailer park. It's not clear whether this is supposed to take place in Azalea's native Australia or in Florida, where she moved when she came to the U.S. ("No money, no family. 16 in the middle of Miami.") Probably it's the latter, and to show the continuity between the two—being poor and white in Australia is not all that dissimilar to being poor and white in Florida.

Poverty isn't just figured as a white phenomenon though. Instead, work is something that Azalea sees as uniting black and white women. Early in the video a black dancer twerks in front of a truck; later Azalea twerks (more convincingly than Miley at least) in a strip club for a skuzzy patron while rapping

"Valley girls giving
Blow jobs for Louis Vuitton
What you call that?
Head over heels?"

She then steals his keys and races out of the joint with a couple of black women, taking the guy's car. When I interviewed sociologist Tressie McMillan Cottom recently about hick-hop, a genre blending country and rap, she argued that, "We don't have any class stuff happening in popular culture, period." She added, "Hip hop, country, and hick hop—the merging of the two—are all part of the larger cultural domain, which has become a place where we just don't have class." Hick-hop, or country rap crossovers, are increasingly popular, as Cottom has written, but they tend to be built around black and white men partying. The shared interracial experience is lust, rather than class per se (as an example, check out this Florida Georgia Line/Nelly video.)

Azalea's track doesn't completely reverse that: the video certainly provides black and white gyrating female bodies for the pleasure of a male audience. But black and white women are not just the objects of the gaze for Azalea; they're also objects of class exploitation. Black and white women work cleaning floors; black and white women work as strippers—a job that doesn't look like much fun given the guy Azalea has to cozy up to. And black and white women work in this video, stripping and twerking, almost as if the entertainment industry and the sex industry aren't all that different. Florida Georgia Line and Nelly bond on the basis of their gender in a milieu that deliberately elides class. Azalea, on the other hand, presents herself as having a common experience with black women that is based both in gender and in class. "Pledge allegiance to the struggle," isn't quite a line out of the Communist Manifesto, but Marx would still appreciate the sentiment.

The class statement here still has lots of problems. While the track is in part about work as exploitation, it also presents work as path-to-success; the poor kid worked, and now she's rich, like Horatio Alger. Moreover, appropriation remains a real issue; Azalea's twerking while stripping is a way to define black women in terms of sex work, then associate herself with both the sexiness and the struggle to make herself look edgy and real. When a white woman declares solidarity with black women in this context, who’s really benefiting?

Still, for all its limitations, there's no way around the fact that "Work" is about work. Criticizing Azalea for racial appropriation is fair. But doing so can't help but erase, or discard, her argument—which is that hip-hop speaks, or can speak, not just to race, but to an experience of poverty and labor which is meaningful to people, and especially to women, of different races and nationalities. Azalea may not be entirely convincing, but there's something to her claim that hip-hop is hers because she worked for it.