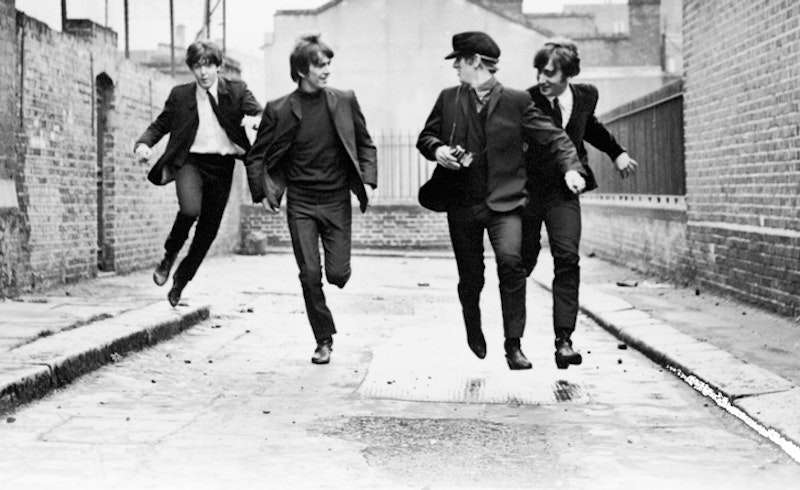 The Beatles were my favorite band at one time, and the White Album the top release. My enthusiasm has waned over the years; I still think the band is fabulous, but I doubt I'd rate them above Sly and the Family Stone, as just one example. Nor would the White Album be my pick for best album ever—I don't think any Beatles album would even make my Top Ten. That's because, despite a mountain of hype, the truth is that the band never quite made a perfect record; everything they recorded from Sgt. Pepper’s on, is marred by at least one or two tracks of cutesy schlock and/or failed experimentation. As evidence, here are the 10 worst Beatles songs of all time, from the merely mediocre to the truly awful

John Lennon was supposedly inspired by "Hymnen," but "Revolution Number 9" is crabbed in comparison to Stockhausen's range of assaultive sounds and silences. "Revolution 9" is good for a giggle or two, but overall it comes across as a mildly interesting curiosity rather than a work of genius, much less successful than VU's contemporaneous efforts to combine rock and the avant garde.

"Do You Want to Know a Secret?"

Hardly a tune for the ages. Lennon, the primary composer, reaches for the innocent effervescence of the girl groups the Beatles adored, but he can't quite catch their purity or, for that matter, their knowingness. The result verges on Pat-Boone-like parody. George Harrison's treacly vocals don't help matters; you can just see him mugging at each "Whoa, oh, oh."

"All You Need Is Love"

Again, this could easily be worse, but it still sucks. The bloated orchestration is a poor substitute for the Beatles’ own playing, which can save even annoying Paul McCartney nothings like "Hello, Goodbye," (also from Magical Mystery Tour). Most of all, John's hippie dippy message of universal music hall love has dated badly.

Most of the Beatles' worst stinkers are Paul's fault. This is a case in point; "Let It Be" has some nice playing from the band as it goes along but the maudlin-philosophizing-over-earnest-piano opening is hard to recover from. It's clear from this song why Billy Joel was a fan.

Say what you will about the Beatles, but George Martin is really not a genius; the band's reliance on him resulted in way too many songs that sounded like Muzak. The supposedly existential lyrics here come across as glib. "All the lonely people, where do they all come from." I don't know, man. Deep.

Endless intolerable gush. Even if you argue that the song is somewhat redeemed because it prompted this accidental exercise in outsider art, it's still hard to forgive lines like "take a sad song and make it better," not to mention every one of those stupid "nah-nah-nah-nahs."

"While My Guitar Gently Weeps"

George's thin voice nattering would-be profundities like "With every mistake we must surely be learning" while Eric Clapton provides a guitar solo as self-mythologizing indulgence. It's a shame that this is so well known, while better Harrison efforts like the melancholy "If I Needed Someone" are relatively obscure.

The hokey pokey “Michelle” is supposed to be affectingly naïf, but instead comes across as calculated smarm. Rarely has French sounded less sexy; somewhere Serge Gainsbourg was dry-heaving.

Similar to "Eleanor Rigby" in the banality of the orchestral backing, but down-rated further for even more sentimental dreck. The counter-culture generation-gap narrative pulled from the headlines of the Daily Mail must have seemed relevant at the time, but in retrospect it comes across as exploitive, dumb, and time-bound.

Paul solo with string quartet; this launched more than 2000 cover versions and was voted the best song of the 20th century in a BBC radio 2 poll, as well greatest pop song of all time by MTV and Rolling Stone. Which just goes to show that people love banal melody and indifferent singing if it's coupled to sufficiently blatant nostalgia.

"The Long and Winding Road"

Paul was outraged by Phil Spector's bombastic overdubs, and he had a point; in its original form the song is just a run of the mill crappy Paul ballad, but Spector's interference pushes it into extra-special heights of gloppy wretchedness. That didn't stop it from being a U.S. hit of course; an embarrassing moment for Paul, for Spector, and for the American public.