An interview with Melat. 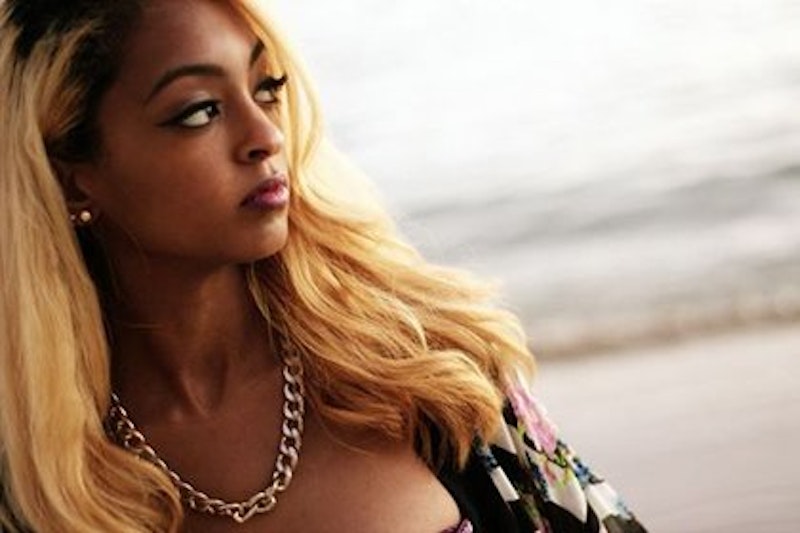 Interested in making a career as a rapper or R&B singer? You have to be comfortable with two modes: confessional and swaggering. This is true of the all the big names—at least those who impact the course of popular music: Kanye, Beyonce, Drake, Rihanna, Future. If artists of the next generation want to matter, usually they have to show that they can handle the two poles.

As an example, take the singer Tinashe. She’s gotten attention for her mixtapes, which tend to be introspective. Last year’s Black Water contained a song titled “Vulnerable”; she sang a duet with Erik Hassle earlier this year entitled “Innocence Lost.” But she needs to balance that out if she wants to make a play for the big time, so her fleet radio hit, “2 On,” comes full of lines like “get faded, turn up with the big boys/live fast, die young, that’s my choice.”

The singer Melat doesn’t listen to much new music (except for Justin Timberlake), but she possesses a natural way with duplicity. Melat “started trying to make actual songs in about 2010” and met the producer Pha “when he was beginning to produce.” At the time, she was still “too scared to sing for anybody at all,” but now, Pha “records and engineers” everything she does. After putting out the free EP Canon Aphaea two years ago, Melat releases started coming more frequently. In addition to the next installment in the Canon series—Canon Ourania: The Illumination—she’s got another project entitled Side B. Her latest work, three tracks produced by Jansport J, may be her strongest. (All can be heard on her Soundcloud page.)

Aphaea ushers you in with vulnerability, opening with a simple piano ballad, “Balance,” that sneaks under your skin by playing with perspective. Melat sings “you like the way she balance,” as if describing another girl. But then she switches to first person, starting to use “I.” It’s hard to know who is who—is Melat jealous of another girl? Is she singing about herself? The mood stays dark, and the dogged piano riff stalks you through the whole song.

It’s later on Aphaea when Melat ambushes you with her other half, showing her ability to negotiate both sides of today’s pop equation. The brash “Wavy” catches the singer at full bluster—she’s blowing by her competition and taking the time to make sure they know it. She sings in a rapper’s cadence, bouncing easily and lightly despite a thick beat that’s syrupy and tenacious. Her message is clear: “I’m 20,000 leagues above your sorry ass, couldn’t catch me if you try.” She also contributed vocals to Killa Dro’s “Dusse,” which came out this year; it has the horn stabs and grand strings of 1970s soul, but contemporary trap drums. Melat expresses her commitment to a life-in-the-fast-lane approach that’s not far from the one Tinashe declared allegiance to in “2 On.” “It’s the new religion,” sings Melat. “We gonna live with no regrets and we don’t fret on bad decisions.”

Recently Melat met another producer, Jansport J, through Twitter, and they’ve been putting songs online. Their collaborations, with snapping beats and smooth vocals, evoke the popular hip-hop soul of the 90s. The foundation of “Move Me,” the first track the two worked on, is a high vocal sample that functions almost as a second hook. The drums are sharp and in your face, but also slightly sloppy, in manner of beloved 90s beat makers like Pete Rock. A guitar line squeaks through the cracks in the beat, compressed but still shiny. Melat’s voice gets multi-tracked at all the right moments.

After they nailed this one, Melat and Jansport decided to extend and expand their collaboration into an upcoming EP. This is a savvy move, since 90s R&B—from the likes of Aaliyah and TLC—has become increasingly influential in the last few years. It’s also a logical evolution for a young artist in the current musical climate: hip-hop soul is equal parts soft and hard, mixing sensitive lyrics and tough rhythms.

A few questions for Melat:

Splice Today: When did you start making music? How long have you been writing your own songs?

Melat: I’ve always been writing, but I started trying to make actual songs in about 2010, and didn’t really start putting anything out till Canon Aphaea in 2012.

ST: You’ve recorded a number of cover songs. How do you pick a song to cover? When you’re covering a song, how is that process different than when you’re singing your own songs? Do you think it’s harder to work with a song that someone else has already done?

Melat: Sometimes it’s a song that’s hot right now and I’m like, lemme take a shot at it. I can make this sound totally different and put my twist on how the song is interpreted. When I create my own songs, I am laying the road map. I have to take what’s in my mind and present it in a way that can be understood whereas with covers it’s taking someone else’s idea and saying, “Okay, I get that… but how about if it made you feel like this instead of that.” It’s definitely fun and interesting to make covers but writing is my escape so sharing ideas and thoughts of my own is always going to win.

Melat: EP’s are more formal to me. Every song I write is important to me. I don’t want to make anything that could be perceived as a throw away, I feel like the label ‘mixtape’ connotes that. That’s just how I feel about the term, no judgment towards anyone else’s music or personal interpretation of the word. Who knows though, maybe one day I’ll be in that mood.

ST: Where does the name Canon Aphaea come from?

Melat: At the time of writing Canon Aphaea, I wasn’t exactly in the brightest of all places. Pha and I were trying to come up with a fitting title for the EP and we came across the name Aphaea, a Greek goddess whose name means “without light.” I knew it was perfect the moment I heard it.

ST: Lately you’ve been working with some different producers. How did you meet Jansport or Pha the Phenom? How do you envision the role of a producer? Do they play an active part in the recording process, or is it more of a supporting role?

Melat: Pha (pronounced Fay) and I met years ago, when he was beginning to produce and I was too scared to sing for anybody at all. Once I sang for him, we clicked and have been working together ever since. Pha records and engineers all of my music. He is the other half of all my music and visuals. Jansport J and I were introduced through Twitter by a mutual friend. There’s just always been a huge attraction to the tracks we do together and now, very soon, we will be releasing a collaboration EP entitled Move Me, named after the first track we did together.

ST: Do you listen to much new music?

Melat: I don’t really listen to too much new music to be honest. I like to keep my inspiration as pure as possible. I’m a huge Justin Timberlake fan. Musically and image-wise I think he’s got it.  To work with him would be amazing.