Together Through Life, Bob Dylan’s latest recording, is a stinker that’ll soon be forgotten. 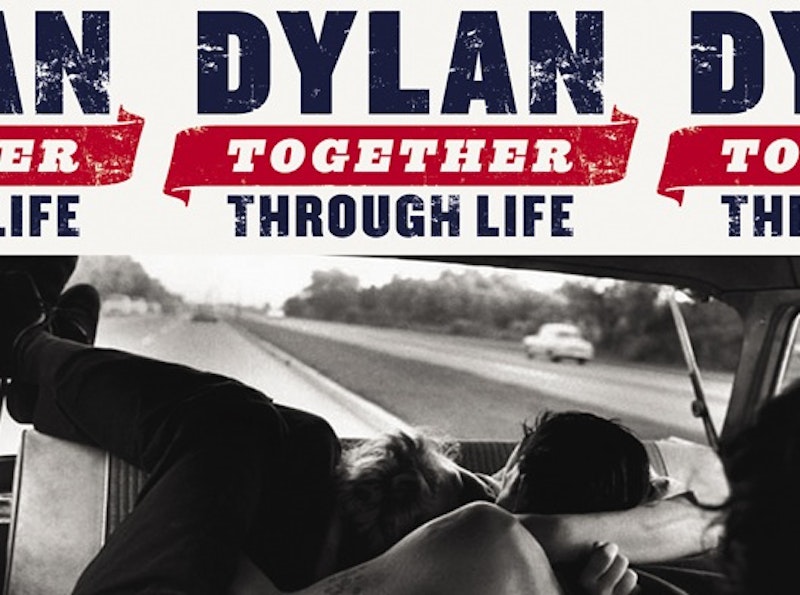 It’s not as if I break out in hives upon listening to a new Bob Dylan record, but it’s not a pleasant activity, ranking below mowing the lawn but above having a cracked filling repaired. In fact, as I think about it, the last time Dylan released an exciting bunch of new songs was in early ’75, Blood on the Tracks, and that coincided with my most recent cavity. And, let’s be honest, that record, while a step up from Planet Waves and New Morning, hasn’t aged all that well, with the clunkers “Meet Me in the Morning” and “Simple Twist of Fate,” getting in the way of his two gold-standard 70s songs “Idiot Wind” and “Tangled Up in Blue.” (I prefer the original acoustic versions, unveiled officially, bootlegs apart, in 1997, since they’re a lot meaner and sung with more conviction, but that’s a quibble.) Why contemporary critics, of whatever age, rhapsodize over Blood in the same sentence as Highway 61 Revisited and Blonde on Blonde is an irritating mystery, but maybe they’re nicer guys than me.

In fairness, I don’t listen to every one of his new records, but when the media pounces on a release with the tired “Dylan’s Back!” enthusiasm (and some critics are guilty of this misleading theme six or seven times over), it does rouse my curiosity.

Dylan, who turned 68 on May 24—no small accomplishment, considering that the actuarial table of pop stars is on par with Russian factory workers—is indeed an enduring American legend, and when he doesn’t revert to his lifelong habit of making up preposterous stories (which was inventive and fairly audacious in his early 20s and slipping into different personas, but kind of embarrassing for a senior citizen), is one of the most insightful men alive in today’s popular/celebrity culture. It’s just that his last 20 or so records, including his latest, Together Through Life, really stink, and I imagine that once this article is complete I’ll relegate the CD to the pile of near-discards, maybe next to Imagine or anything Morrissey released after he and guitarist Johnny Marr broke up the Smiths, the best band of the 1980s.

The most significant aspect of Dylan’s career right now is orchestrating his legacy, and in that endeavor, unlike so many of his contemporaries and the folk/country/blues/swing musicians he alludes to and borrows from, he’s masterful. No Direction Home, the 2005 documentary directed by star-struck Martin Scorsese—although Dylan was clearly in charge—was brilliant, stopping at 1966 on the last leg of his worldwide tour with the Hawks, an admission by the songwriter that for all his subsequent work, he’s most proud of his kaleidoscopic ’64-‘66 output, even if his eventual obituary will have “protest singer” and a mention of “Blowin’ in the Wind” in the first paragraph. What surprised me about No Direction Home was how precise and articulate Dylan was in the present-day interviews—as compared to a really ditzy Joan Baez—measuring every single word he spoke for posterity.

I say “surprising” simply because the latter-day Dylan has been captured on television and in concert as ludicrously incoherent, giving the impression that he didn’t know what time of the day it was and didn’t care if he came off as one of half-dead losers in his breathtaking ’65 song “Desolation Row.” Just as his book Chronicles: Volume One was wonderfully written—even if he slipped in a doozy here and there, such as the influence Ricky Nelson had on him as a teenager—and his indescribably eclectic Sirius XM “Theme Time Radio Hour” is far more vibrant that any new songs he releases, Dylan’s value today is as an archivist (of his own songs and those artists he admires) and, when the spirit moves him—translated, when it’s in his self-interest—commentator on current and long-forgotten events. It’s quite possible he’d be one of the great talk show hosts of the modern era.

Listening to Together Through Life, it’s possible, I suppose, to believe that Dylan really thinks he’s making exceptional new music. Possible, but not likely: the songs, mostly co-written with Robert Hunter (immediate tip-off), have little lyrical merit and while reviewers have somehow fallen for the singer’s p.r. that he’s incorporating his love for old Chess Records classics with his own tweaks and observations, this record’s a bust. Not wholly embarrassing, but a bust.

One song, “If You Ever Go to Houston,” typifies the entirety of Together Through Life, with David Hildago’s brain-numbing accordian giving the unmistakable feeling that this record is the kind of background music you’d hear at annual state fairs—the soundtrack for a dull walk around the midway with a corn dog in one hand and tickets for rigged games of chance in the other. Dylan, of course, as an emerging star spun the stories that he’d run away as a youth and was a hand in traveling carnivals, an apprentice in the menagerie of sword-swallowers, dwarves, one-legged magicians and loose, aging women with impossibly immense butts and cheap lipstick. He just can’t pull that off now, especially with words like these: “If you ever go to Houston/Better walk right/Keep your hands in your pockets/And your gun belt tight.” Dylan on the lam, one step ahead of the law, with that six-shooter at the ready. Oh, brother.

Slate’s John Dickerson, a smart political writer, was lured in by this song, writing, “By the time you get to ‘If You Ever Go to Houston,’ you feel like you’re in a cantina near the border.” Dickerson, who doesn’t reference any Dylan song before 1975, which is very odd even if he was born in 1968, promiscuously suggests that Dylan’s returning to “his roots,” and says his voice “makes a kind of sideways sense… [His voice is] imperfect, clumpy, and cracked from drought, but it works.” I’ve no idea what “drought” has “cracked” the man’s pipes, but sometimes otherwise level-headed writers go all giddy when writing about Dylan, perhaps attempting to spruce up their own prose with Dylanesque phrases.

I do think it’s nifty that Dylan, nearing 70, is still making music and touring before audiences who increasingly want to get perhaps that last look at an icon; it’s his craft and passion, and who can argue with that dedication and persistence? That’s the good news (at least for Dylan). But this is one guy who grew up during Dylan’s peak creative years, and with very few exceptions (maybe “Catfish,” “Seven Days” and “Jokerman”), the songs he’s composed since the mid-1970s are half-baked and would never even be considered by the staff who help him compile the playlist for his radio show.