It's all about the tragedy. 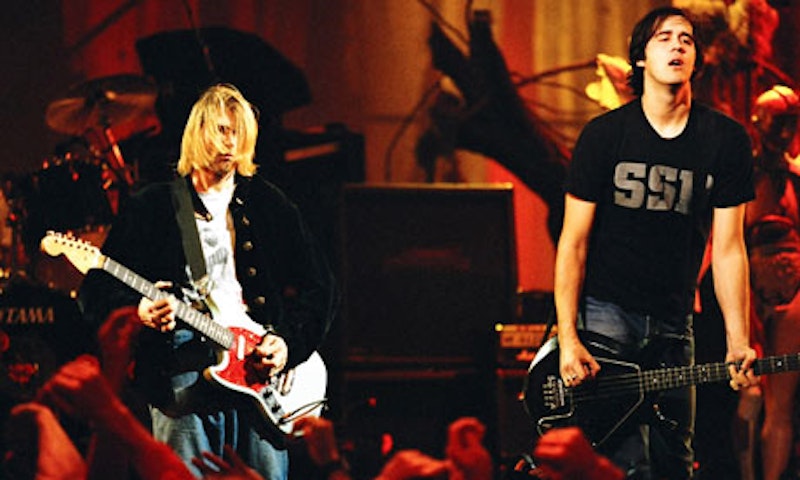 The 90s were my formative years, but the majority of its music never spoke to me. The coexistence of so many competing commercial genres (pop, grunge, alternative, metal, west coast vs east coast rap, first-wave American EDM) makes it unforgivable that teenage me couldn't find something to latch onto. Maybe it was because none of the people in those bands actually looked like me, but all I remember is a foreboding grimness that I found all too bleak.

The 90s were a golden age of shoegaze and abrasion fronted by attractive and wiry men and women screaming or whimpering about some vague conflict that they could not deal with. Guitar bands served as de facto conflict mediators. To anyone who was born before the 90s, it really did seem that music had become an anthem to complaining.

To lots of folks that I know today, Nirvana was “the band.” I never understood their appeal. Diehards know their history intricately; who they knew in the feminist punk movement, who issued what death threat to which band member, who Kurt Cobain referenced on a particular song.

Through the gushing of my own friends, as well as documentaries and interviews, I became aware of Cobain's sympathies towards the feminist punk movement, gay rights, and the often marginalized. However, I think some forced level of studiousness is often applied in ascribing them some pseudo-intellectual clout. There's a revisionism among fans that attempts to paint Nirvana as more than just another rock band. Aerosmith was a rock band and they weren’t cool. Classic rock was old. Nirvana was cool. They were new and referenced deodorant brands.

I can’t help but listen to Nirvana today and hear a Doors-esque level of parody. For the Doors it was a send-up of the psychedelic 60s. For Nirvana it was the recasting of aggressive macho rock as symptomatic insouciance. Nirvana is as much the soundtrack to Nietzsche as Wagner. On the best Nirvana songs, Cobain strangles the guitar neck to yield total rock & roll, but plays amateurishly enough to indicate that it’s posturing.

Nirvana served as a major smoke screen to mask the tastes of Cobain. As an artist he had mercurial tastes: The weird mix tape from “Montage of Heck,” the unforgettable appearance of him on MTV Headbanger’s Ball wearing a thrift store prom dress, the tattooed look of whimsy and defiance in his press photographs.

Cobain's lyrics have a transgressive quality, "He's the one/Who likes all our pretty songs/And he likes to sing along/And he likes to shoot his gun/But he knows not what it means." Cobain confronts his assumed audience on later Nirvana albums, but it’s a moment as pointed as when Prince instructed how white people would clap for him on 1999’s “D.M.S.R.” The audience was fair game because they were beyond the pale in interpreting cleverness. The artist lived in an echo chamber. Investigating banality and confrontation was Cobain's craft.

Cobain as a band leader was essentially a surrealist in the mold of Luis Buñuel, an artist attracted by the scandal and provocation of destructive thoughts, but ultimately too appalled to carry them out.

Yet there were times when a very public artist yielded to his sensitive side. Case in point, Nirvana's unplugged show. Any idea of his likeness was replaced by a fragility. Perhaps Cobain sensed he would die soon, but to read the performance as a knowing self-eulogy is overzealous fan fantasy. Even the Surrealists, jonesing for Death's appearance, were always unsure of its exact moment.

Surrealism is an apt description of what Cobain and Nirvana were trying for, because it is an art preoccupied with the menace of others more than the acting out of any actual violence. Surrealism courts tragedy. The level of revisionism built in to any article or reference to Nirvana or Kurt Cobain always seems to end with tragedy. He went a step beyond the requirements of membership.

The most pernicious element of this tragedy is that Cobain the depressed junkie still overshadows Cobain the thoughtful songwriter. Most music serves to work through a problem so that its author can reach resolution and relief. Nirvana’s music does not serve that function. Like fashion and branding, the goal is always to feel that what you have in the present is never enough, that you need something more. Looking for meaning in a moving target is what many bored teens languishing in American bedrooms eagerly take to. To me that type of investigation always leads to non-constructive thoughts. No one gets anywhere through languishing and brooding. You can only hit a brick wall, which is what Cobain ultimately ran into.