Bully’s the Most Exciting Band of 2015 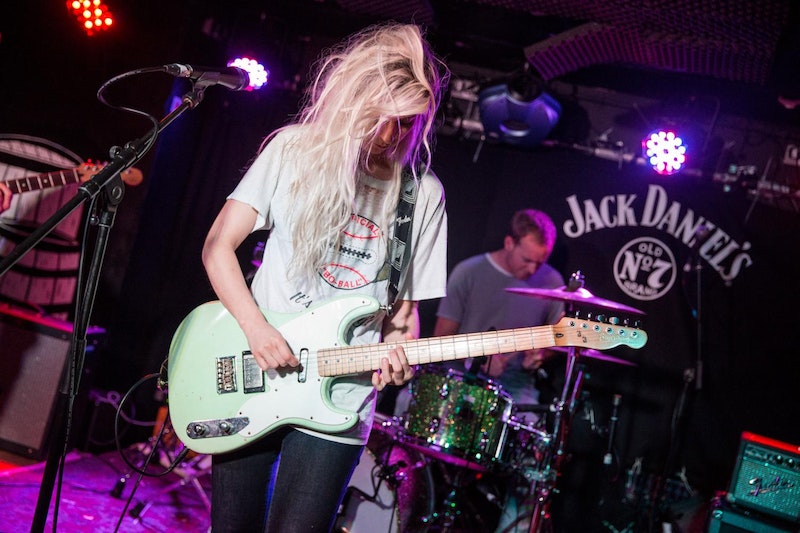 Most critics are hailing Courtney Barnett and Speedy Ortiz’s Sadie Dupuis as the best lyricists in indie rock, but I’d sooner nominate Bully’s Alicia Bognanno. While none of the songs on Bully’s excellent debut album Feels Like spin compelling narratives like Barnett’s “Depreston” or Speedy’s “The Graduates,” Bognanno has a way of isolating specific, intimate details to give the listener just enough information to highjack her headspace. The best example of this is on the second single, “Trying,” which, so far, is my favorite song of the year. Bognanno conveys the anxieties of young adulthood through lines like “Been praying for my period all week”, “I question everything/My focus, my figure, my sexuality,” and “There’s no flawless education/Just a stupid degree.”

The whole album is full of memorable one-liners; in fact, Feels Like might be more quotable than Drake’s latest mixtape. On “Too Tough,” Bognanno shatters an ex’s fragile notion of masculinity, coolly shrugging, “You’re just too tough to talk it out or talk about it.” On “Trash,” she wails, “It’s magic how you make me feel like trash.” These piercing eviscerations would grow tiresome if Bognanno didn’t turn her prosecutorial eye on herself. “I Remember,” amazingly only the second most self-critical song on the album, is a failed relationship in one minute and 47 seconds. On “Six,” Bognanno’s misplaced guilt over breaking her sister’s arm in a childhood mishap bubbles over into a display of unconditional love and loyalty.

The four tracks culled from Bully’s 2014 EP (“Brainfreeze,” “Milkman,” “Bully,” “Sharktooth”) stand out from the other seven, even though they were re-recorded: they’re poppier, sillier, less visceral. That’s not bad—if anything, they give the record balance. Still, that doesn’t stop them from coming off as less significant than, say, “Too Tough” and “Trying,” the album’s two best songs, or even “Trash,” which is my least favorite. This re-contextualization pushes “Brainfreeze” and “Milkman,” the EP’s strongest tracks, into supporting roles, and gives the heavier “Sharktooth” more weight. As a whole, I can’t say if the album versions or the originals are better—I prefer the former for “Bully” and “Sharktooth”; the latter for “Brainfreeze” and “Milkman.”

Musically, Bognanno has described Bully as “grunge/indie/garage.” She agreed when someone called them “fuzz pop,” seemingly happy when described as “90’s reminiscent”. In other words: she doesn’t care about labels or genres. Bully’s a contemporary guitar band, that’s all you need to know. When you’ve released the best album of 2015, who needs a silly hybrid genre to cling to?