Music From a Very Big Place 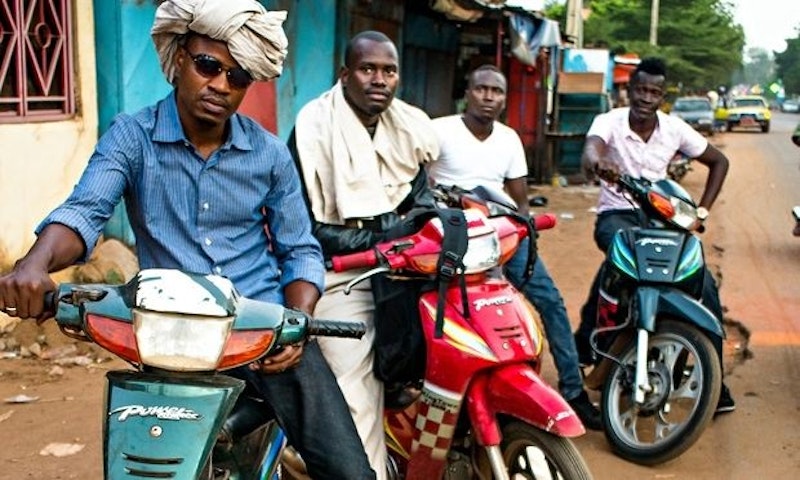 Because of lingering racism, Africa in the west is often thought of as a single massive entity. That's the case for African performers too; the continent's staggering musical legacy and diversity gets flattened out to Fela Kuti and Paul Simon collaborators. The enormous continent is often stereotyped as a frozen tradition, which influences westerners, but doesn't change itself.

Any brief sampling of current music from the continent upends those notions. In particular, three 2015 releases I've picked up recently make the case for Africa's massiveness, and massive diversity.

Songhoy Blues is a fearsome psychedelic guitar band. It's the first African group signed to Atlantic since 1972, and you can see the executive calculus. The hot picking electric fire recalls plenty of models familiar to Western ears, from Dick Dale's tremolo whammy, to reggae, to Zeppelin's hammer of the gods. But what Songhoy Blues sounds most like is a faster, louder, more swaggering version of other performers in the Mali diaspora, like Tinariwan or the great Bombino, whose 2013 album Nomad was produced by Black Keys' Dan Auerbech.

Songhoy Blues' album is titled Music in Exile—Mali experienced a jihadist takeover in 2012, much music was banned, and three of the band members had to flee the country. But even from exile, they sound like their homeland—which also happens to sound like what the rest of the world calls rock.

If Songhoy Blues parallels Western axe traditions, Mbongwana Star takes psychedelia and heads for other planets—the first track on their album From Kinshasha is titled "From Kinshasha to the Moon." The group is a collaboration between Irish producer Liam Farrell and musicians from the Democratic Republic of Congo, including Yakala “Coco” Ngambali and Nsituvuidi “Theo” Nzonza, formerly of the band Staff Benda Bilili. Mbongwana Star mixes traditional influences, chants, and rhythms, with electronic beats and beeps, to create knowing, goofy, cool Afro-futurist funk transmissions. "Suzanna" is a boiling electronic trance, like someone fed a dance rave up into a computer and then plugged it into your skull; "Kimpala Pala" drenches the electronica dance beat in sensuously dripping wah-wah, "Coco Blues" is a slow, soulful roll, with the keyboards imitating blues guitar, or possibly at points vice versa. The whole album is an eclectic strut by a band that clearly feels it can do anything.

Nozinja Lodge by Nozinja isn't as varied, but its singular style is even more startling. Nozinja is a South African DJ and producer central to the shangaan electro, a style of African dance music that mixes traditional sounds with disco and house and other influences. The result is spastic, repetitive soul, akin to Chicago footwork, though with less cursing and a loping groove. "Baby Do U Feel Me" has a crazed percussive assault with chipmunk squeaks and a loop declaring, "God is in the skies"—but it still manages to keep an eye on the dance floor shake. "Nyamsoro" is a more contemplative effort, with synth washes; Vangelis run through Aphex Twin programming beats so that the Chariots of Fire dudes go stumbling and staggering off onto alternate, less British race tracks. The Aphex Twin comparison there isn't an accident; Nozinja Lodge is appropriately on Warp, home of aggressive electronica past—though it's been a while since Richard D. James came up with anything this innovative or interesting.

It’s easy to see the parallels between Songhoy Blues, Mbongwana Star and Nozinja. They're all rhythmically complex; Songhoy Blues and Mbongwana Star at least are broadly psychedelic. But they’re also really different. Nozinja's spit/glitch electronica sounds like it comes from a completely different corner of the globe than Songhoy Blues' contemplative strum on something like "Mali." And that makes sense, because they do in fact come from completely different corners of the globe; Mali's farther from South Africa than it is from the U.S.  If bands from the two places sound the same from where we're sitting, it's probably because we're not listening very closely.