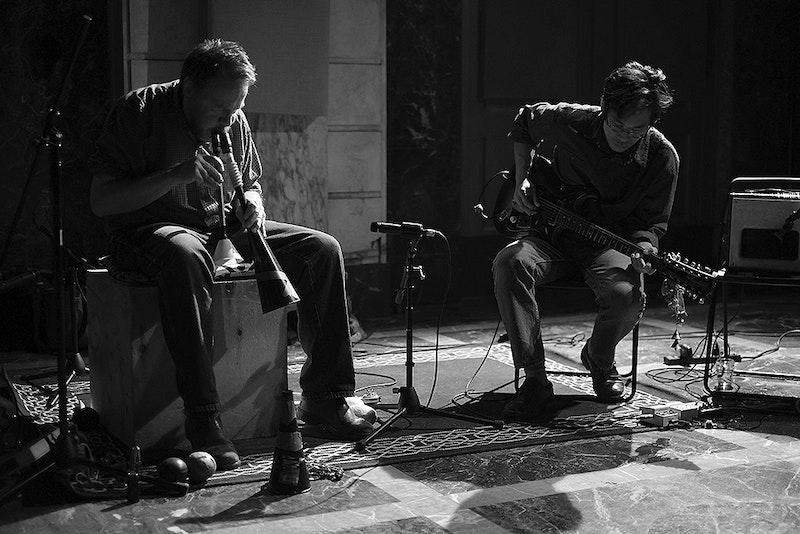 The entirety of Catharsis seems excavated from a time capsule circa 1981, when post-punk was unavoidable in the underground and could be personalized in countless ways. Exuding a runt-of-the-little scrappiness, the instrumental “Untitled” is cobbled together from spare parts and gumption—a bargain basement drum pattern, an ugly little bass line, dozen of guitar shards fished out of a dumpster and then haphazardly Super-glued to the rest. While “Untitled” ends before it can really begin, the song regularly succeeds in reminding me that there is no good reason for me to not own the full Swell Maps discography.

The danger than albums released in or around January will be forgotten come year-end is always real. So don’t sleep on Wooden Box, a compendium of extended blues grinds and odd pique eruptions like “Box-Altos,” wherein Rick Brown’s punchy floor-tom and homemade horn squawk violently duet in a cloud of sawdust. The result is so raucously noisy that at first you don’t notice the absence of Che Chen’s electric guitar, which writhes restlessly at the forefront throughout the rest of the esteemed, combustible Box.

It’s impossible to watch the “Sunday Candy” video without recalling Outkast’s “Roses” treatment, and the songs themselves share certain similarities: a utopian vision of racial equality; a wholesomely sanitized/middle-class notion of blackness; and theater-geek emoting. “Candy” deals in gratuitous dizzy-making Sunday service harmonizing; corny camp saturates every moment, yet every moment rings true even if one can’t relate directly to the lingo or context(s). The performers’ enjoyment translates into our enjoyment, generous washes of organ/piano/live band electricity sloshing out of the wash basin. The rest of Surf—free on iTunes, if you care—didn’t quite ring my bell, but “Candy” is a mood stabilizer I can’t quit, the one and only non-Death Grips rap (esque) track this year that actually matters in a warm, intangible way. Remember way back, when Kanye West was all about this feel? Nah; me neither.