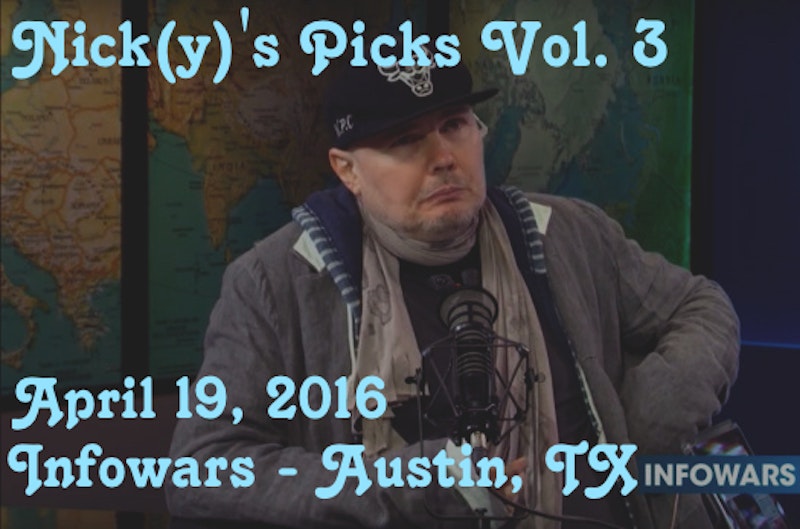 On Tuesday, Billy Corgan made his third appearance on Alex Jones’ Infowars radio show. You may be wondering why he’s dressed like a Depression-era hobo in winter. In 1994, he explained to Michael Azerrad that “I hate being cold. It reminds me of when I got punished when I was a kid and got sent down to the basement.” Video of the interview was simulcast, and I watched the whole thing mid-afternoon, around 3:30 p.m., before any of the misleading headlines popped up.

I thought Billy had a lot of interesting and thoughtful things to say—the only thing I took issue with was his use of the term “social justice warrior,” a stupid buzz phrase used by Gamergate fascists and misogynists that completely misses the point. The phrase makes no sense as a pejorative—why should fighting for social justice be an insult? However, the phenomenon that Corgan and Jones are talking about, exemplified by the rash of campus protests this past semester that saw oversensitive students spitting in the faces of people they disagreed with—that’s real and disturbing. Billy never compared “social justice warriors to the KKK." He was stressing how important it is to keep the humanity in mind of these people that turn into symbols, whether it’s a student protestor or an assaulted reporter. “Go back to Selma in 1932, and the Klan member spitting in some person of color's face, don't you think that guy thought he was right, too? OK. So how is this any different?” Invocation of “safe spaces” on college campuses is a movement towards infantilization and bubble-like living that’s disastrous when applied to the real world.

Recording Quality: B-. I had to sit through five or six reruns of the same commercials with before/after pictures of a shirtless Alex Jones selling some of his snake oil weight loss and muscle mass supplements. Jones grates as always—for every salient point he has about globalism and crony capitalism, he says something idiotic like “tranny” or calling celebrities “slaves” and “minions.” I don’t need to hear about how great X2 or Super Male Vitality are, or that Billy “wouldn’t be able to tour without them.” I’ll admit I was spooked by the report that followed the interview about the rash of earthquakes recently in the world and what it means for the world and our impending doom. But no, I won’t be buying Jones’ “WAKE UP AMERICA” brand coffee beans any time soon.

Performance: A-. Throughout the interview, Billy deftly dodges all of the bullshit that Jones throws his way, including what’s mentioned above. His comments about growing up near Skokie, Illinois in 1977 when the KKK wanted to march through town was insightful—he pointed out that the discourse at the time revolved around the idea that “We may disagree with them, we may hate them, but we must protect freedom of speech and the First Amendment at all cost.” He stressed several times that, “Once we lose freedom of speech in this country, it’s over.” Most of the time when Corgan talks about Millennials, it sounds a little “get off my lawn,” but he has a point about the difference between Generation X and the “hashtaggers.” Armchair activism is easier and more popular than ever, and it’s trendy right now to be a victim. The same people that petitioned to have Harriet Tubman replace Andrew Jackson on the twenty dollar bill are out today with thinkpieces on how disgusting and disgraceful it would be to have any woman's face printed on one of white supremacy and capitalism's primary symbols. Amidst Infowars' occasional insight, and aided by X2 and Super Male Vitality, Billy remained focused and clearheaded in the face of Alex Jones' alarmist nonsense about mind control and feminizing chemicals in our drinking water.

Setlist: B+. This was a significant improvement over Billy’s previous two Infowars interviews, which were filled obscure covers like “Chemtrails,” “Buying Gold in Bulk,” and “Vaccines Cause Autism.” The one stumble in this setlist was “Social Justice Warriors." Isn't everyone sick of that one by now? "Clickbait" was a standout: “People ask me, ‘What can I do?’ You have to stop clicking on things. When you click on something that you think is free, it is not free. You are in essence disenfranchising your own power by giving somebody else power because they want you to click on that stupid thing because it actually means something.” Colonel Tom Parker, Elvis' exploitative huckster manager, used to say if he ever wrote a book, it would be called How Much Does It Cost If It's Free? Billy also talked about “the fatigue of the clickbait society” and BuzzFeed’s sinking revenues. Other strong additions to the set included "Freedom of Speech," "American Values," and "Institutionalized Racism."

There’s lots of thoughtful material in here that doesn’t deserve to be clowned on. Whatever you may think of his music or his politics, Corgan deserves respect for being the antithesis of Dave Grohl: a thoughtful musician with cultural cache willing to risk his reputation and career for principle. He won't get the credit he deserves until he's dead. And when you watch an uncomplicated interview at 3:30 in the afternoon and see totally misleading smear headlines pop up around 9:30 that night, it makes you consider Corgan and Jones’ “The media is complicit in tarring on anyone who doesn’t play nice and stay in the little boxes we made for them” theory.