The original lineup's final show in 1999. 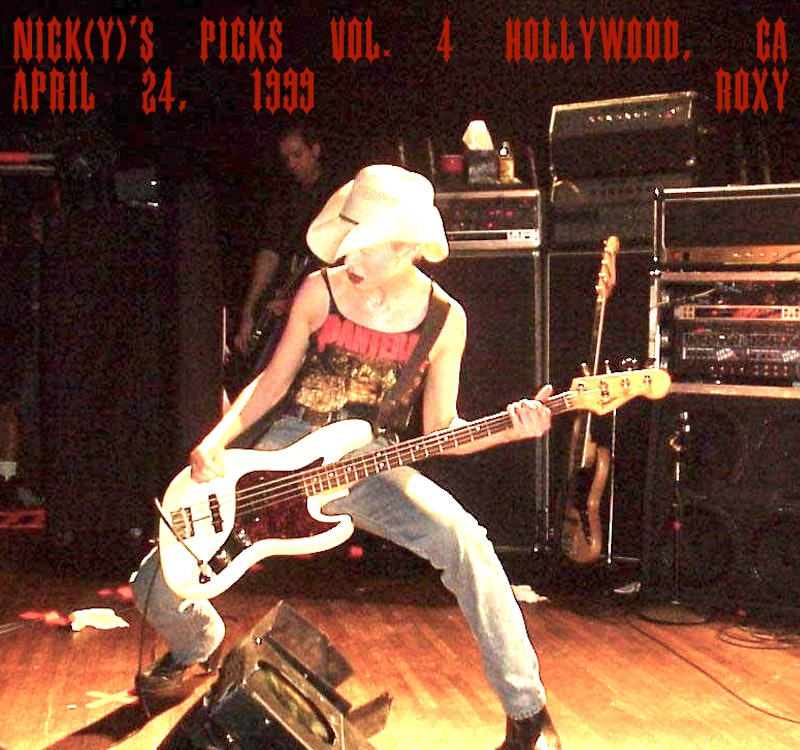 Seventeen years ago tonight, the original lineup of The Smashing Pumpkins - Billy, James, D’arcy, and Jimmy - played their last show together at the Roxy in West Hollywood, California. It was the last stop on The Arising! Tour, a two week club tour that was intended as a preview of what would become the Machina albums. Less than a year after the release of Adore (which was poorly received by the public, their record label, and many hardcore fans at the time), the band was eager to get back on the road and prove they could still rock to the devoted. These Arising! shows are held in high regard by Pumpkinheads for a number of reasons: this was the first time the original lineup had performed together since July 10, 1996, and with little fanfare, Jimmy Chamberlin had rejoined the band after nearly three years of Billy, James, and D’arcy trashing him in the press at every opportunity for leaving them in the lurch and royally fucking up the biggest year of their career. This reunion was improbable and short lived: D'arcy left the band on September 9, 1999, and the original four haven't stepped on stage together since this show at the Roxy.

Fans also look back fondly on the Arising! shows because it was their first exposure to the Machina material, and since the album wouldn’t come out for another ten months, they had plenty of time to get acquainted with the bootlegs from this tour. Every single show was recorded by fans and widely distributed within the community. When Machina came out, it was slammed by fans for its glossy, dense, and over compressed production and altered arrangements of many of the songs played during the Arising! Tour, especially “The Imploding Voice” (aka “Virex”) and “Blue Skies Bring Tears.” I understand why a lot of fans who were around at the time are still salty about the way Billy treated these songs in the studio - they got used to the bootlegs and became attached to those versions of the songs and filled in the blanks. When I saw Animal Collective for the first time on March 24, 2006, they were touring in support of Feels, but already playing mostly Strawberry Jam material. I had a year and a half with those songs, and I still can’t listen to that record without imagining what should’ve/could’ve been. Removed from that context, I can enjoy Machina for what it is, and lately I’ve been listening to it more than ever. Fans always say “the Arising! versions are better,” and while that may be true for “Blue Skies Bring Tears,” a slog of a song that I never cared for in any form, “The Imploding Voice” is useless compared to the album version, a great example of Billy’s “Judas Priest meets Simple Minds” concept for the guitars on Machina. It’s a beautiful but oft-maligned and forgotten song, and as with “1979,” I’ve never heard a performance of “The Imploding Voice” that even comes close to the album version.

Recording Quality: C+. This recording is fairly quiet, and there are a lot of drop-outs in the beginning, from “I Am One” through “Pug,” which has a total drop-out in the middle. From “La Dolly Vita” on, the recording stabilizes. This thing doesn’t sound good through iPhone earbuds, it’s too quiet - listen at home so you can compensate for the low volume. Amazing crowd banter throughout: dudes freaking out during “I Am One,” some guy after “Today”: “This is a Roxy show! They’d never play that song anywhere else….I only recognized one song.” Because all of the Arising! shows were documented and are widely available, with an excellent soundboard of the show at Tramps in New York on April 14, 1999, this show is only worth having for its historical value as D’arcy’s last show.

Performance Quality: B+. The band is relaxed and, at the end of their two week tour, tight and comfortable on stage. There isn’t the electricity of that first show at St. Andrew’s Hall in Detroit on April 10, 1999 - Jimmy’s return - but the comfort here isn’t a going-through-the-motions sort of thing, it’s the band having fun. And while I’ve said in the past that the band were at their best when they were confrontational (with each other and the audience), at this point in their career, the Arising! shows were a brief sunspot that would be followed by a year and a half of recrimination and disappointment, by fans and the rest of the band once D’arcy quit or was fired for her debilitating drug problem. They never followed through with the whole Machina project, and this whole album cycle was like watching the body of the band decompose. Very, very gross. These shows offer a brief glimpse into what could’ve been, and this show in particular is historic because it’s the last time the original lineup has stepped on stage together. You'd never know it's curtains though just from listening. God willing they’ll all get it together for the Hall of Fame in a few years. They close the show with a killer “Geek U.S.A.,” and that’s it.

Setlist Quality: B+. Besides the meat-and-potatoes arrangements of many Machina songs, the beginning and ending of these shows were pretty static: opening with “I Am One,” “Zero,” “Pug,” and “La Dolly Vita,” a group of songs that spans every era of the band up to that point. It's a fantastic suite of songs, though they're poorly represented here because of the volume issues throughout the first three songs. “Ava Adore” and “Today” would follow the Machina suite in the middle, and the band would encore with some combination of “Muzzle,” “Soma,” and “Geek U.S.A.,” along with two other new Machina songs, “If There is a God” and “With Every Light.” The Arising! arrangement of “Pug” is brutal, and much more satisfying than the raspberry-electronica version on Adore. “Today” is, against all odds, a standout - Billy altered the vocal melody and made an otherwise overplayed song fresh again. This mellow alternate melodic arrangement sounds like CCR meets Sabbath’s sludgy march. “Wound” also sounds great here, despite its stripped down arrangement. I think the band greatly improved all of the Machina songs presented here in the studio.

This show is a good listen, sort of sad, but it’s so much less emotionally taxing or time consuming than listening to the “final” Metro performance from December 2, 2000. The original lineup’s last ninety-four minutes together on stage are a reminder of what could have been.