A Defense of Rivers Cuomo

So what if Weezer’s a calculated construction? 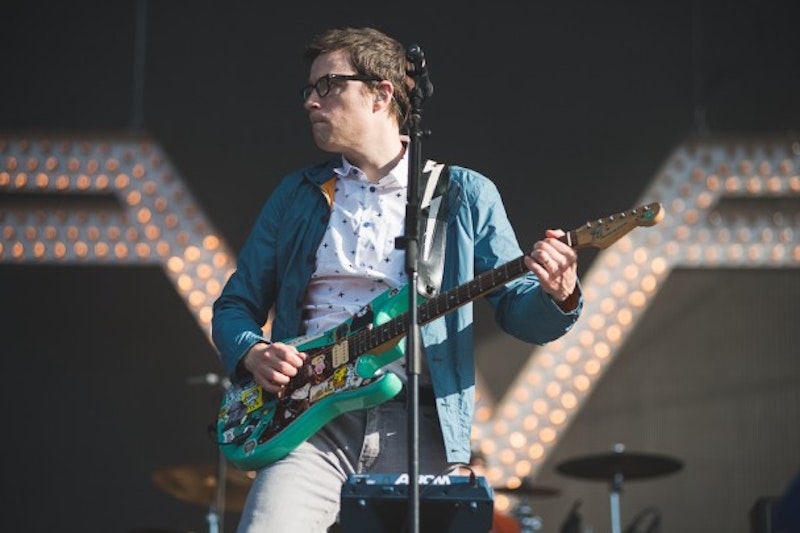 Rivers Cuomo is one of rock’s most coldly calculating songwriters. Ever since he was scorned by the press and his record label for revealing too much and selling too little with 1996’s Pinkerton, he re-cloaked and hasn’t disclosed anything about himself ever since. After a five-year hiatus, Weezer returned in 2001 with The Green Album, a record that didn’t even crack 30 minutes, 10 songs whittled down from over a hundred written using meticulous processes involving spreadsheets, researching and examining the work of Green Day and Nirvana, and intellectual exercises that are the antithesis of the romantic ideal of the autodidactic artist that rolls out of bed and writes two hit singles before getting in the shower. Most people familiar with Weezer know about Cuomo’s new mask and the stark difference it made between his first two records and everything that followed. But I found this quote in a recent interview with Rolling Stone insightful with regard to Weezer’s origins in 1992: “This is what no one gets. Weezer was an intentional paring down of guitar technique, song structure, and lyrical persona so that it would seem like we had just picked up our instruments twelve months before. I stopped using hair gel, Aqua Net, and hairspray. I looked at those pictures of me when I was four or five, and I had the glasses and a bowl cut, a T-shirt and a blue windbreaker. It was just like, ‘This is how I am in my natural state!’”

So Weezer’s a calculated construction. Does it matter? Who cares? Why should rock ‘n’ roll still be held to 1960s standards of authenticity? Why do we want our songwriters to emerge fully and immaculately formed, with none of the seams or stitching visible? The great irony about Pavement succeeding in promoting a lackadaisical slacker image is that they were even more calculating and unnatural than the major label rock stars that they passive-aggressively called out in “Range Life.” Rivers Cuomo is still here, still writing songs, and deserves respect for surviving in a blown-up business 25 years after he joined it. Yes, the reports are true: Weezer’s new record, The White Album, is shockingly good. No, it’s not “the best since Pinkerton,” because I think you can cherry pick a handful of songs from everything they’ve done since 2001 and come out with at least two top to bottom fantastic albums. “(If You’re Wondering If I Want You To) I Want You To,” the lead single from 2009’s Raditude, is just as good as anything on The Blue Album, and I found 2008’s The Red Album to be remarkably consistent, interesting and fairly experimental as far as this band goes. “Heart Songs,” “Dreamin,” “The Greatest Man Who Ever Lived (Variations on a Shaker Hymn),” and “Pork and Beans” are all keepers, too. 2005’s Make Believe is obviously their nadir—sure, it had a hit single, but man, what a horrendous song: “Beverly Hills.” Talk about calculation. Given Cuomo’s computing process, it’s striking how few of his post-90s songs veer into that kind of pandering and bang-your-head-against-a-wall hook territory.

So every time Weezer puts out a new record, the band’s fans hope that they’re getting back to something. And about half of The White Album (“Do You Wanna Get High?,” “L.A. Girlz,” “Summer Elaine and Drunk Dori,” “Endless Bummer,” “King of the World”) is as good as anything on those first two beloved records. Everyone waiting for Cuomo to come back with something completely amazing are missing out, anyway: check out Alone III: The Pinkerton Years. It’s better than any Weezer album, and demonstrates how much respect Cuomo deserves for his persistent dedication to his craft and for the thought he puts into the presentation of his work, going all the way back to 1994.