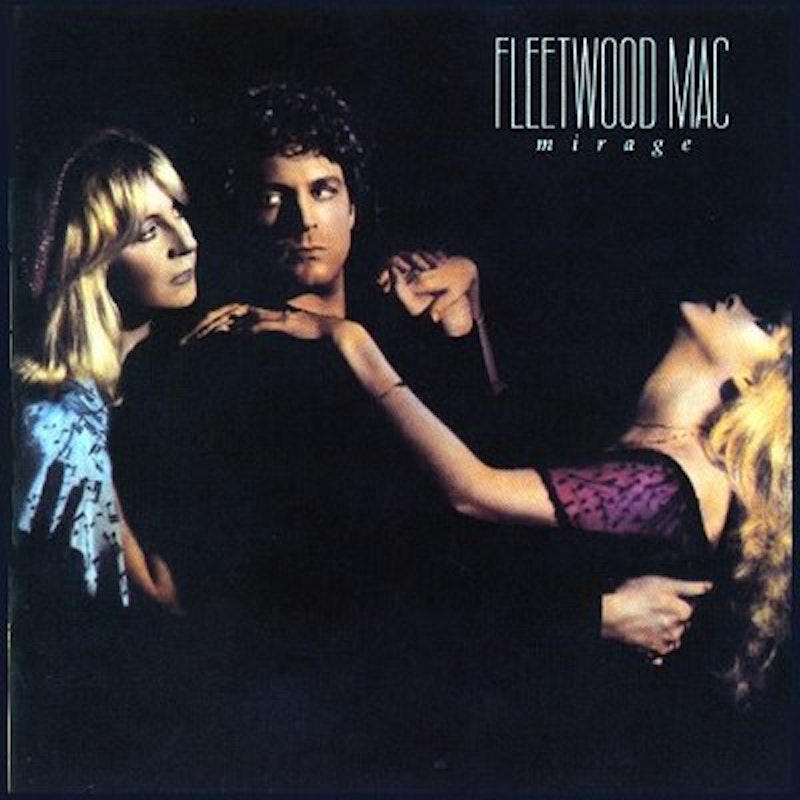 Of all the classic Buckingham/Nicks period Fleetwood Mac albums, Mirage is probably the least necessary. Fleetwood Mac (1975) was the mercurial debut; Rumours (1977) the mega-commercial apotheosis; Tusk (1979) the sprawling double-album mess; and Tango in the Night (1987) the long-awaited triumphant comeback. Which, again, leaves Mirage (1982) as that other album, over there, with songs on it and stuff.  Why did they record that one again?

It's true that Mirage doesn't have the urgency of the band's earlier efforts. After the experimental excesses and (relative) commercial failure of Tusk, this follow-up comes across as the band deliberately catering to expectations, serving up comfortable, predictable, easy-listening groove after easy-listening groove. On "That's Alright," Stevie Nicks reins in her witchy-woman earth-mother schtick and comes up with a shoulder-shrugging countrified ramblin' ballad, part Emmylou, part Eagles, with Nicks' nasal burr wandering away from its usual spiral of self-absorption to go sailing off into diffuse longing. Similarly, on "Book of Love," Buckingham tamps down his coked-up, cracked-genius schtick and delivers, of all things, a heartfelt doo-wop tribute by way of Brian Wilson, complete with echoey faux-Phil Spector production and those aching beach harmonies spiraling up over the bad-ass guitar solo. "Oh Diane," too, seems to hark back decades, Buckingham's melodramatic fruity vocals channeling Neil Diamond pop cabaret.

Christine McVie always fit easily into the adult-oriented format, so no reining in is really required. Still, there's some sense of settling down in that her best moments on this record are collaborative in a way that's a little atypical for her songs. The album's big hit, "Hold Me," is built around the Paul-John tension between McVie's peppy, poppy arrangement, and Buckingham's strained backing vocals, which insistently suggest that that repeated "Hold Me" may be more desperate than affectionate.

It's true that I'm picking and choosing tracks here to some extent. "Gypsy," for example, finds Nicks back in self-dramatizing warble, and Buckingham is in full jittery, unhinged, possibly-maybe-substance-enhanced cry on "Can't Go Back." But still, the album as a whole feels less ambitious and less unexpected; even Nicks and Buckingham being Nicks and Buckingham is a known quantity at this point, after all.

Perhaps the best example is the opening track, "Love in Store." Again, it's a McVie song, and she sings lead. The background, though, is handled not by Buckingham but Nicks—a phenomenal harmony singer. There's no sunny exterior/dark undercurrent here; instead, Nicks' textured voice fits into McVie's smooth alto, lending a grounded authority to the song's airy, soaring nothings. "Never take your love away," goes the chorus, and it sounds like they're singing not to some random lucky guy, but to each other. In that context, the repeated refrain, "you've got lovin' in store," ends up flipping from single entendre to a kind of reverse entendre—not about sex, but about friendship—not singing as prelude to sex, but sex as metaphor for singing. A declaration of eternal lust mellows out into two friends sewing on the sofa, cheerfully, for all eternity.

Probably some folks will see that as a dis. Who wants to sew when you can fuck? Who wants easy listening when you can rock? I can't speak for anyone else, but as a fortysomething middle-aged guy—well, let's just say I'm fulfilling my demographic destiny. Sometimes you want to rock, and sometimes you want the perfect soundtrack for getting in the Prius and driving through the city on a lovely autumn day on your way to pick up the kid. Dull people deserve good music too, and why can't the set, the predictable, and the superfluous sometimes also have love in store?