Journey of a Polygamist

A musical entrepreneur in Baltimore. 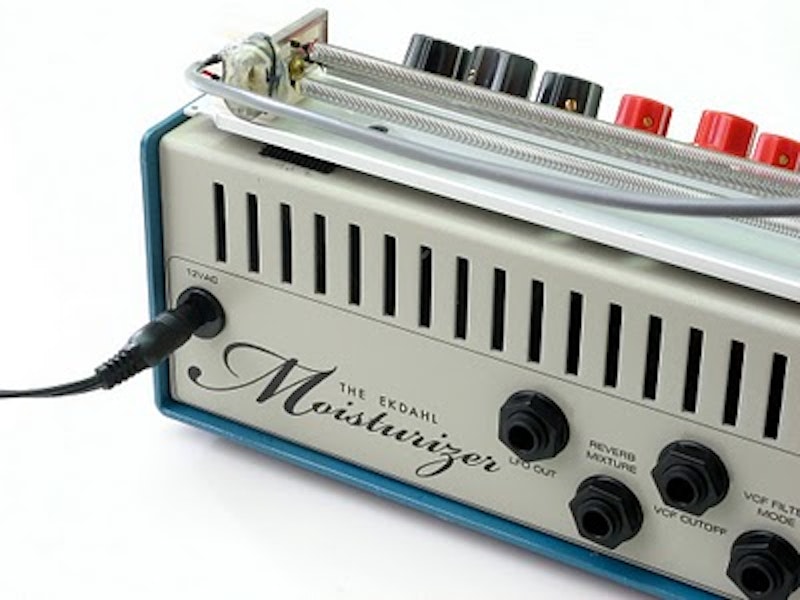 In the early winter of 2010, Swedish expatriate Karl Ekdahl, 29, could be found at a rented desk drinking coffee in Hampden’s True Vine record store in Baltimore. Through a salon style door local personalities including electronic duo-and past-Björk collaborators-Matmos, musician Dan Deacon, and storeowner Jason Willett would peek their heads in to chat with the diminutive man about local politics, tour stories, and synthesizer design. These conversations would bubble and flow, and end in a coffee break before beginning the cycle anew. Ekdahl, the self-taught engineer, would realize that he was now alone at his desk and quickly begin to work on fulfilling store orders for an instrument known as the Moisturizer.

The Ekdahl Moisturizer, a hoagie-sized reverb box with a filter section attached to it— the squashed sounding samples of Daft Punk’s hit records with the unsettling pitches of early sci-fi film soundtracks come to mind—has sold 550 units. Each one’s been individually assembled and shipped by Ekdahl, whose one-man business he calls KNAS, to electronic instrument distributors in both Europe and the United States. Customers have included Trent Reznor of Nine Inch Nails, 80s synth pioneer Jean Michel Jarre, and indie-pop darling Stephin Merritt of the band The Magnetic Fields. When asked about the instrument’s origin, Ekdahl claims that it was simply a sketch of a sketch of a figment which M.C. Schmidt of Matmos had given him free rein to design. As for the Moisturizer name itself Ekdahl thoughtfully answers that he believes it was a group effort.

At the time of its completion and as orders began to roll in Ekdahl had already started thinking about the design of a new instrument, an analog synthesizer. Much like the Moisturizer the idea for the new synth was given initiative by M.C. Schmidt. Unlike it, a name was generated for the creation before its prototyping. The Ekdahl Polygamist would eventually take its creator a near three years to design. “I thought that I was done after one year, but then I had a period in which a team of people across the world gave their opinions on what I was creating,” he stated in reference to the numerous online synthesizer and technology forums that he is an active member of. Without both foreign and local feedback Ekdahl notes that the synthesizer could not have evolved in the innovative ways that it did during its second year of design.

The world of synthesizers is effectively divided into two categories, analog and digital. Whereas the theory behind digital synthesis results in a sound that is defined by its precision and reproducibility, analog synthesis is conversely responsible for a sound marked by an archaic and shaky character. In both designs it is an electronic component known as the oscillator, which is responsible for the generation of a sound wave in turn modified by various components along the way. For Ekdahl a point of inspiration lay compellingly within the lines of this common knowledge.

Speaking about the process of being faced with a blank sheet of paper he said, “You don’t reinvent the wheel when it comes to circuits. Instead I combined two different places and put them in a different setting.” By deliberately designing one of two oscillators in his synthesizer to operate by rules of additive synthesis that are commonly employed in digital synth design, he balked at another practical definition which allots that oscillators in digital synthesizers normally operate by additive synthesis and analog synthesizers normally operate by subtractive synthesis. “Additive synthesis is barely used in analog synthesizer design,” a premise he notes when contradicted has the sonic capacity to create noise, droning, and chaos. Unlike modular synthesizers, an ideal but pricey go-to to for electronic musicians seeking to create chaos and noise, the Polygamist is a stand-alone instrument from which components can neither be added nor subtracted.

Ekdahl is by his own admission extremely interested by the concept of chaos and the “calculable but very complicated ways in which it appears as randomness.” The Baltimore DIY music scene of 2012 is in itself a study in chaos, its musicians preoccupied with learning new methods by which they can wring unexpected sounds and rhythms out of traditional and non-traditional instruments. The palette of sounds created by the Polygamist can most accurately be described with that ethos in mind. However, Ekdahl himself a self-described “synth-pop nerd,” is not averse to alternate uses of an instrument that has itself arisen from alternate concerns. In between a moment in which we discussed admiration for the emotional impact of specific melodies and his favorite 80s electronic band Skinny Puppy, he said, “It would be inappropriate for me to say that people cannot use this to create totally normal things. The main objective was to make it equally as easy to create chaos and classic sounds that you’ve heard before.” A notable feature of the Polygamist, and perhaps its most intuitive, is a piano key diagram at the bottom of the console. By placing a finger on the metallic strip above the diagram, called a ribbon controller, a user creates a pitch. As the ribbon is designed to be duo-phonic a maximum of two pitches can be created at a time.

Moving the conversation to a fire escape in the warehouse space he shares downtown with his fiancé and several close friends, we stopped momentarily to observe the abandoned buildings and occasional passersby in the alley below. There is an elusive poetry in how functioning as a one-man business has become increasingly de rigueur in a tumultuous and recession-marked American landscape. For Ekdahl, a committed socialist, he sees his company and products not as an alternative to larger electronics firms that he can’t compete with, but rather an affordable alternative aimed at individual interaction with its clients. Speaking broadly on various electronic music manufacturers he believes that part of the problem with the lack of innovation in instrument design stems not only from “products designed by engineers,” but also from “a need to be as mainstream as possible to increase profit margins.”

With the Polygamist already available for pre-sale he is currently completing details on a sliding fee scale. “I’m not interested in huge profits and I think that the rich who can afford to pay a lot for it should and the poor who cannot should pay what they can. I think of it in terms of taxation.” Though he did not further elaborate on specifics of the system, he alleges that there will not be an absence of knobs or features in the lower-priced brackets of the system. In a spirit similar to musicians and artists who have turned en masse towards websites such as virtual music store BandCamp and DIY-fundraising hub Kickstarter, you can obtain the Ekdahl Polygamist above or below its suggested price of $1450.

At the time of this interview, nine units were already purchased from online pre-sale orders. Orders for his Moisturizer unit still pour in on a monthly basis. Despite the necessary income that his instruments create, Ekdahl insists that the most rewarding part of his work is when customers email him links to music they’ve made with his instruments. One imagines what project is next now that he has completed his current one. It’s possible that much like a tight-lipped movie director he cannot reveal what is in the works until he discovers it, perhaps by pure chance or by deep thoughts in the distant future.

As the interview came to a close, there was one question I had for the man, which I felt was nearly embarrassing in its tardiness. “I want to point out that there is a difference between polygamy and polygyny. I find polygyny to be an incredibly sexist term,” he firmly stated, a view he emphasized stems from a lifelong interest in feminism. When I pry further about the relationship this has to his creation Ekdahl wryly states, “The Polygamist does both additive and subtractive synthesis. Hence, the marriage of the two.” I find an initial dissatisfaction in this answer, as the obvious logical argument is that the sum in the equation needs to be greater than two. Then it hits me: my mind conjures an image of someone plugging in a freshly unpacked Polygamist. One oscillator is making a pleasant blipping noise and suddenly a second oscillator crashes in as its sonic foil. The user exalts at the excitement they’ve created in the way that only a third party can.

—Disclosure: The author has previously been involved in filming a commercial short for the story subject’s business in 2009.