Natural Snow Buildings: A Haunting They Will Go

The going gets hairy on Night Coercion Into The Company Of Witches. 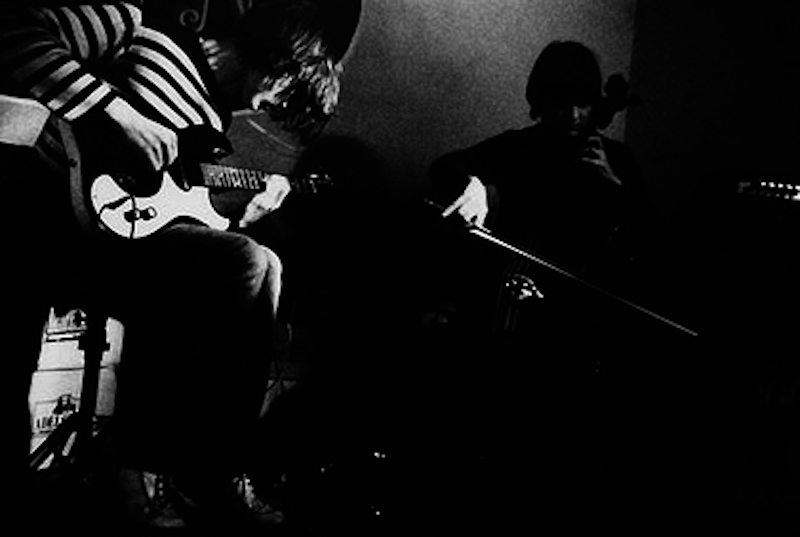 There’s nothing especially writerly about Night Coercion Into The Company Of Witches, the new album from France’s Natural Snow Buildings. It lacks any semblance of a concise beginning, middle, or end. It lacks a definite “a ha” moment, or a point where everything clicks and the listener realizes something important about the space-time continuum. It has no interest in narrative form or conceptual arches or broadening anyone’s intellectual horizons.

What Witches is: sprawling and slovenly and pile-driving, in the way that drunken hippos are pile-driving, if you’re dumb enough to stand in their path; almost three unrelenting hours of summoning-circle thresh and drone. Equilibriums are unceremoniously run through apple presses. The going gets hairy.

“Night Coercion” is 20 minutes of writhing guitar feedback and lumbering drums astride a straining organ figure, all the elements superimposed over one another like a cannonball-sized bruise that isn’t allowed to heal, plus a woman’s wail is distressed into something inhuman and a tambourine is tapped, nervously, against somebody’s leg. There’s something wonderful, terrible, and dream-like about “Night Coercion,” but one shouldn’t necessarily rock “Night Coercion” at night in the same sense that one shouldn’t allow an undertow to take hold at the beach or lurk in cornfields after dusk as mammoth burning scarecrows approach, arms outstretched.

Witches’ other vistas entrance as they paralyze, overwhelm, or—improbably—indemnify: the distortion-rimmed clangor of “Brooms, Trapdoors, Keyholes,” the jigsaw reverb rainbows scowling down on the oversaturated sound killing fields of “Mirror Shield,” and even the Native Americans-akimbo endurance blues of “Gorgon” and “Kadja Bosou,” where the aesthetic of Finnish squalor folkies Avarus squares off against Lou Reed’s “Venus In Furs.” Then hour-long stress test “The Great Bull God” pulps all of these approaches together with arsenic, broken auto glass, and as many brain-dead wood-flute solos and toga-ready ululations as Mehdi Ameziane and Solange Gularte could muster.

“Wearying” is an understatement when it comes to describing the first couple roundabouts with this album. Witches is an incanted, portentous fucking mess, and the gear shifts built into Natural Snow Buildings’ endless sensory assault, and they are there, for real, seem to come and go without notice, in the same way that the gradations of a steamroller are difficult to discern when that steamroller is grinding your bones into powder. Until, of course, you start to realize that you kind of like having your bones ground into power, which is when you start to win at noise.

Night Coercian Into the Company of Witches is now out on Ba Da Bing Records.