On the latest from Emeralds, Just To Feel Anything. 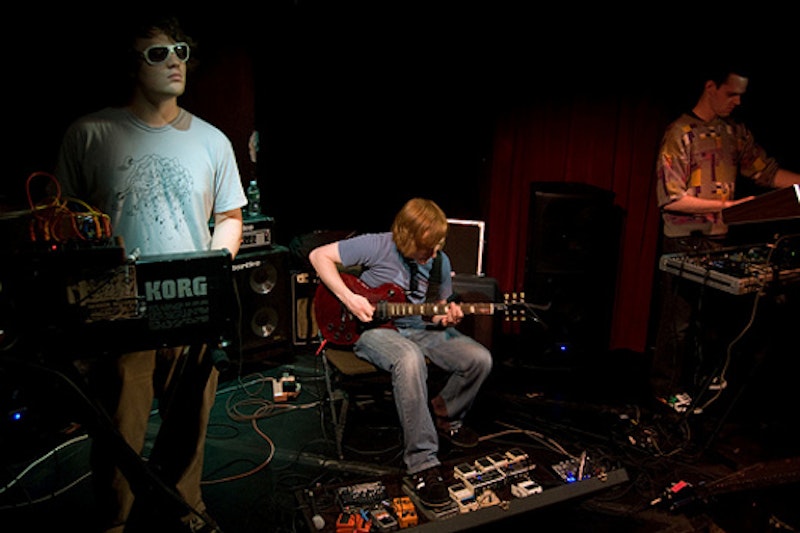 The PR copy for Emeralds’ latest record on Editions Mego reads: “Just to Feel Anything, the new album by Emeralds, surpasses all expectations, just as its predecessor, Does it Look Like I’m Here, did in 2010. This expertly recorded new album sees the band deliver plenty of their distinctive aesthetic for old fans to enjoy while offering a new range of fresh, exciting ideas for newcomers.”

Which tells us exactly zero about the kind of music this Ohio trio makes: international space station waiting room lobby music, soundtracks to digital deli trays, astronaut iPod essentials. With half a dozen synths, some drum machines, and Mark McGuire’s fuzzed and phased out guitar licks that strive high, Emeralds have the best and most well rounded sci-fi sound around these days.

Cosmic drift is the key phrase for Emeralds. Their songs are definitely melodic, very colorful, effusive pieces of avant psychedelic, along the lines of Tangerine Dream, Spacemen-3 (sorta), and even some Vangelis. The synth arpeggios are bright, glistening, and the whole thing is tonally subdued and manicured into something very pleasant, like what you’d imagine HAL would like to listen to for breakfast. To call Emeralds “interstellar waiting room music” might come off as a slag but it’s the most apt description I can think of: overwhelmingly gentle, drifting, accessible, and melodic. There isn’t anything noisy about it. You could play Just to Feel Anything at a YMCA and no one would bat an eye.

Again, this is not to say that Emeralds make boring, indulgent, aimless, or otherwise unremarkable music. The songs on Just to Feel Anything are anchored around a handful of pleasant phrases and ideas, and on those little bits they make songs and glide about. It’s not dramatic, attention-grabbing, or demanding music to listen to at all—but you put it on, let it play, repeat, maybe four or five times, and it starts to sink in how great Emeralds really are. Sonically, they borrow a lot, perhaps too much, from analog sounds of the late 1970s and 80s. Little too much Beverly Hills Cop and Wang Chung—these aren’t new sounds without reference points. For a psych rock/avant band with big, expansive aspirations, it’s strange to hear so many of these goofy elements applied earnestly when they’re so waterlogged and loaded with baggage by now, especially with the glut of post-Animal Collective sampler and synth piglets milling about.

But this isn’t Emeralds fault: they’ve been around since 2006, released hundreds of CD’s, tapes, and records on small or non-existent labels since then, and their voyager vision is not a new put-on. The fact is they do it better than almost anyone else. Listening to Just to Feel Anything, I think of the soundtracks to Perfect Dark, Jet Force Gemini, and .dotHACK fondly—all of the Japanese video game composers who remain mostly anonymous even to the American kids who played their games and probably loved the music (that’s you, Nobuo Uematsu and Koji Kondo). Their work also served in the “background,” but it didn’t keep me from scouring for import copies of their soundtracks. Emeralds’ Just to Feel Anything is a great record, even if it doesn’t command your attention throughout its 42 minutes.