They're back, and don’t say you don’t remember the nicknames. 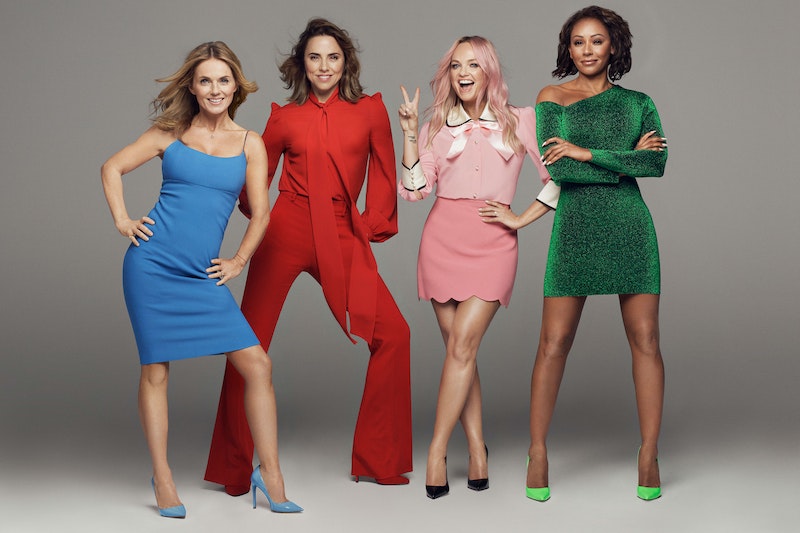 Whether you really want them or not, the Spice Girls are back. The “Spice World” reunion tour, which launched May 24, consists of 13 stadium shows across the United Kingdom, culminating at London’s Wembley Stadium June 15.

The group exemplifies the cheery “girl power” optimism of the Tony Blairite Britain of the late-1990s, the period that marked the group’s heyday. The group came together a quarter-century ago, forming in old-school fashion with the girls answering a back-page ad in a print magazine that also requested they bring a cassette tape to the audition.

After one firing and a replacement, two years of management changes and angst, the five girls broke through with “Wannabe.” Strangely, the R&B-styled “Love Thing” was initially mooted as the group’s first single, but on redhead Geri Halliwell’s insistence, “Wannabe” was released instead. Helped by a cute video of the girls invading a snooty London hotel and raising havoc, it hit #1 in 37 countries, including the United States. It’s a loosey-goosey, bonkers song with random yelping and nonsense verbiage and whose chorus is now stuck in your head the rest of the day.

Don’t say you don’t remember the nicknames. Besides Geri Halliwell, now Geri Horner, crowned Ginger Spice by a music press writer, there was Melanie Brown (“Scary Spice”), Melanie Chisholm (“Sporty Spice”), Emma Bunton ("Baby Spice"), and Victoria Adams, now Victoria Beckham ("Posh Spice"), who’s sitting out the tour and sticking to her fashion empire. Even trimmed from five to four, which research indicates is the bare minimum for a “Spice Girls” show, the first of three shows in Manchester was well worth the 55-pound price for far-off seating.

Peter Loraine of the Top of the Pops magazine gave them their “spicy” nicknames and helped cement their place in pop culture. The group even squeezed out a surprisingly entertaining farce about touring, 1997’s Spice World, in the spirit of A Hard Day’s Night.

You can’t really call them an album group, but the catalog is deeper than one might remember, at least on Spice and the follow-up Spice World. The third album, 2000’s Forever, recorded after Geri quit the group, is a lackluster move toward R&B sophistication which may or may not prove she was the group’s secret spice.

The 2019 shows consist of about 20 Spice Girls originals, the set lists locked in advance to track with the complicated choreography-costume-change interludes, six in all, including versions of Geri’s Union Jack outfit, Mel C’s “sporty” tracksuits, and Mel B’s leopard-skin. There were plenty of women in leopard skin outfits waltzing into Etihad Stadium, perhaps a tribute to Scary Spice’s force of personality. She seems to have taken over Geri’s position as unofficial spokeswoman.

Some friction broke out before the tour between Mel B and Geri after Mel B told television host Piers Morgan she and Geri had a fling in the 1990s, but if the group doesn’t get along, they certainly hide it well onstage. Audio complaints from the first two shows made headlines, but the sound at the Manchester show I attended was as good as can be expected from a concert in a football stadium. The girls themselves sported ponchos and umbrellas during the show, while Scary braved the rain like a true “Northerner” (she’s from Leeds).

The median age of the crowd was predictably high, and predictably “girl”-powered at maybe an eight-one ratio. I only felt like Old Spice when it came time to sing along to “Say You’ll Be There.” The Girls were lithe and lively, as if they’d stepped out of 1996, especially Scary, who ran to keep up with the “Mexican wave” that she unleashed over the stadium. Sporty Spice announced it was the best crowd of the tour, but I bet she says that to everybody.

No new material, nothing left to chance. There were a few soft spots, most buried tactically in the middle of the set. “Holler” from the third album is still a strained come-on. I wouldn’t have minded hearing some solo hits for variety, perhaps Emma’s 1960s-tinged “Maybe” or Geri’s “It’s Raining Men.” But the Latin-inflected “Viva Forever” emerges as a hidden gem, with added poignancy for fans given the single was released as Geri was leaving the group. “Who Do You Think You Are?” is a lot of fun. The group’s smash international hits are left mostly toward the end, building momentum that climaxes with “Wannabe.”

Still, it takes more than a few brilliant singles to capture and hold the pop imagination from generation to generation, as the former members of Girls Aloud are learning. So what’s the secret that’s filling stadiums 20 years later? Group dynamics: Unlike most previous girl pop groups, the Spice Girls each have clear and distinct personas and their own individual fashion sense.

—Clay Waters was editor-in-chief of Times Watch, a division of the Media Research Center, a conservative media watchdog group.