On their latest LP, Hi Beams. 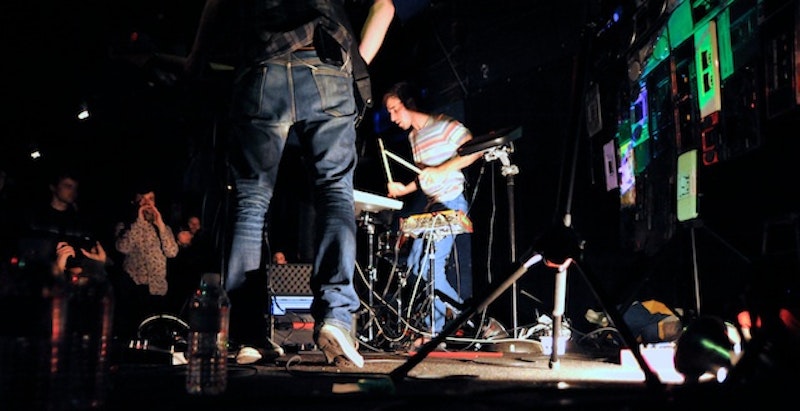 Javelin, the New England duo of cousins George Langford and Tom Van Buskirk, has always been great at creating catchy electronic pop. On their latest LP, Hi Beams, they're no longer sampling burnt-out dollar bin cassettes; now, they're a band who makes it sound ridiculously easy to write a hit pop song.

Hi Beams, far more than past albums, sounds like a mission statement. The guitar rock instrumental "Judgement Nite" is massive. Stadium rock power chords cut through skittering hi-hats and finger snaps sounding somewhat like Kanye West's The Good Life. The similarity is likely deliberate, given the duo's sampling tendencies. However, much like the hip hop maven himself, Javelin seems to be more keen on learning from the history of pop music rather than banking on gimmicky nostalgia. "Nnormal," for example, is an odd pairing of promethazine-soaked hip hop elements with a dub step baseline. However, it's far beyond a mashup, its interstellar synth pad and playful vocals hint at something more calculated.

"Friending Revised" has a familiar chord progression, but I had to run through my mental rolodex several times to search for its source. "So you leave your hometown/Only come back on weekends/You should know better by now/Don't bite the hand that feeds you" singer George Langford opines. It's a wise piece of advice given the band's relentless touring history. Indeed, much of HI Beams feels at times like an expansion of the road-faring themes that have informed their previous work. "Look around/Know you've made it/Isn't everyone just masquerading." These lyrics to the intro track "Light Out" are as clear as day. The music, however, full of drum line snares and violin samples, tells a different story. Rather than having their heads fully in the stars, there is a neat juxtaposition that Javelin pulls off between Langford's vocals and their air tight production which consistently brings everything back into proper perspective.

While Hi Beams does harp upon the live studio element a bit much at times, the band wisely mixes in live sounds. "Airfield Revised" is a great Italo-disco track backed by the band's signature wood blocks and peppy cymbal pings. In a similar vein the one minute instrumental "Garth Hudson" is a throwback to the band's earliest releases. Overall Hi Beams is a great pop record. You'll be hard pressed to find another electronic album this summer that urges you to brush up on your solfege scales.