On Jay-Z's "Open Letter" and Its Implications 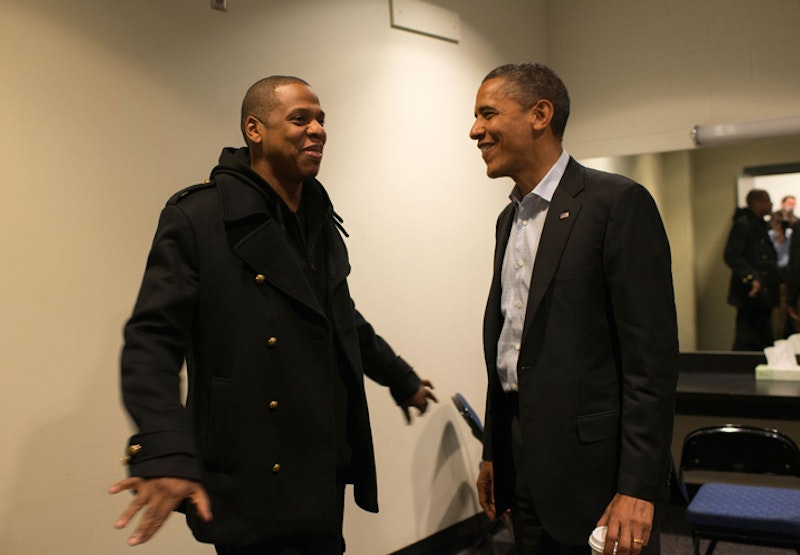 "Open Letter" makes for a unique, slice of H.O.V.A hagiography in its suggestion that the CEO of hip-hop and the President of the United States are homeboys who text each other every day. In a lot of ways, it's nothing new: rap's zillionth retort track. Typically, these tracks ultimately evolve into a dialogue or story line involving rival rappers or rap crews; sometimes the tracks are more one-sided, with a rapper taking verbal aim at an ignorant public figure beyond the rap arena who has disparaged the rapper or the genre in some way. In this case, the intent was to set the record straight about two facts that are in and of themselves not especially interesting but have become semi-controversial media memes: 1) Jay-Z's move into sports agency, and 2) the nature of Jay-Z and Beyonce's recent sojourn to Cuba.

Also not especially interesting: "Open Letter" itself. Jay-Z plays a linguistic game of patty-cake so inane over production, so blasé that it isn't much worth discussing; suffice to say that Chief Keef and narcotics are name-checked, and that your time would be better spent contemplating Pusha T's "Numbers On The Boards." But "Open Letter" got me thinking a bit about Kingdom Come, Jay-Z's failed attempt to invent or beat a path to the commercial clearing for grown-up rap; no one wants to listen to 40-year-old dudes rap about dealing drugs, bedding models, shooting up shooting galleries, or being the best at any number of activities. Maybe the real answer is that rap needs to be less Grand Theft Auto and more Seinfeld: zeroing in on the minutiae of real, everyday life and twisting the picayune into weird, grand art.

Cam'ron's brave, generous "I.B.S." is probably the ultimate example of this approach in practice, but it deserves more company. Why can't Timberland spit darts about his least-favorite bodybuilding supplement? Why won't Acton Bronson shout out 16 bars about the wait staff at certain NYC haute cuisine institutions? Why won't Lil Wayne break down his worst tattoo experience over a Mannie Fresh beat?

When are we going to hear Kanye West diss his design staff in mincing, excruciating detail or Bun B call out the sloppiest auto detailer in Port Arthur, Texas by name? Inept label interns, diffident maître Ds, triffling booking agents, obsessed fans, bloodthirsty groupies: rap needs more stories about what rappers' lives are actually like on a day-to-day basis. "Open Letter" is like that, in a sense: what you're listening to is a harried executive forced to craft a reaction to the reaction to certain business decisions. It's not much of a reaction—it could have been a better one, given another 24 hours or so of incubation—but in a very specific sense, this non-single is intrinsically more daring than anything on The Blueprint III.