Interpol and the Most Perfect Execution

Turn on the Bright Lights, ten years on. 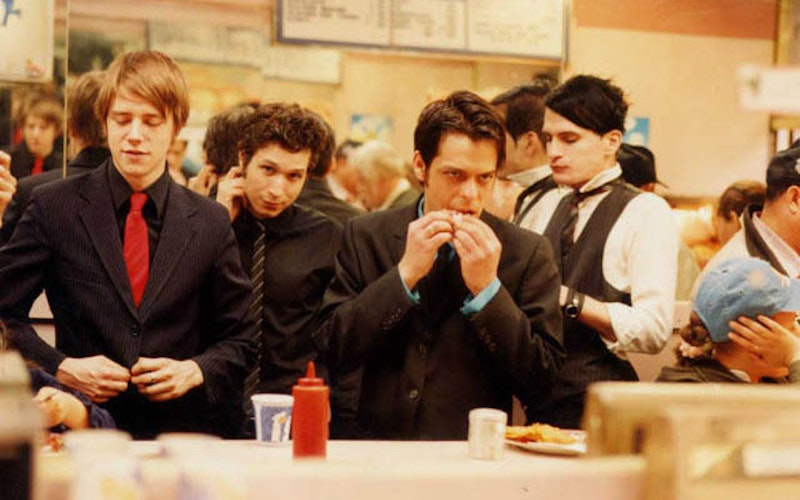 For a band to release an anniversary edition of their debut album before they've hit middle age can mean any number of things. At its best, such a maneuver marks a major occasion, a fond reminder of a work that is widely recognized as having established an artist either creatively or financially. Alternatively, a re-release can always come off as an attempt by a record label to squeeze some more money out of an artist that has become a stale commodity. Either way, it's impossible to avoid one inevitable conclusion: ten years is an impossibly brief period in which to gauge a band's influence within music history.

When Turn on the Bright Lights was released in 2002, New York City was coming to grips with the unintended aftermath of complex US foreign policies. Most bands generate buzz within their first year or two before being scooped up by a label or disbanding. Interpol had endured four years and two drummers before being considered a serious group. It is compelling to believe that dogged persistence, more than revisionist disaster theory, informed the attitude of what would become TotBL. For those who weren't following the band prior to the album's release, the anniversary edition is worth it if only for the second disc of demos and EP-only tracks. Tracks like the ambient-rock thriller “Song Seven” and the spoken word passages in “A Time to Be So Small” are testament to the kind of gripping emotional ride the band can take you on.

In listening to the demos, you can hear how songs like “PDA” and “Roland” were fully-formed before Sam Fogarino stepped in as replacement drummer for Greg Drudy. Whereas Drudy glides through the material in a functional way, Fogarino's cuts on the album versions of both tracks are striking in their balance between pure impact and meaningful articulation. While part of the reason may be that producer and engineer Peter Katis turned up the drums in the mix substantially, it is perhaps more insightful to think of what it was in the man's playing dynamics that compelled Katis to do so. His key decisions to record the tracks at a faster pace than the demos, focus on the clarity of the vocal performances, and boost the rhythm section at all times shows a fundamental appreciation that the band could benefit from a much more muscular rock sound.

As with any warts-and-all approach, there are tracks on the album that show the group trying to figure out the nuances of their sound. “Get the Girls” sounds like a deleted party scene from some B-espionage movie complete with shouted wordless vocals. Compared to the major-key moments of the pop track “Precipitate” that follows it, “Get the Girls” is an absurd parody, an early aside that does not fit well within the band's catalog. Alternatively, “Gavilan (Cubed)” could have been one of their better songs; it is perhaps the most forward-looking glance to the depth of material that the band would cover by their third and fourth albums, however the demo illustrates only the band's limitations at the time. Frontman Paul Banks' lyrics are the most consistently convoluted element of the group, and appear to have evolved little since the early days. Save a minor alteration of a previously existing verse or chorus, it's obvious Banks was a harsh self-editor during the recording process. Perfectly good verses in “Stella Was a Diver” and more noticeably “The New” are completely absent in their demos. Perhaps it befits the mentality of a band such as Interpol that if something could be only half-executed then it simply was not worth saying at all.