Rihanna Holds Nothing Back on New Album

Though maybe she should. 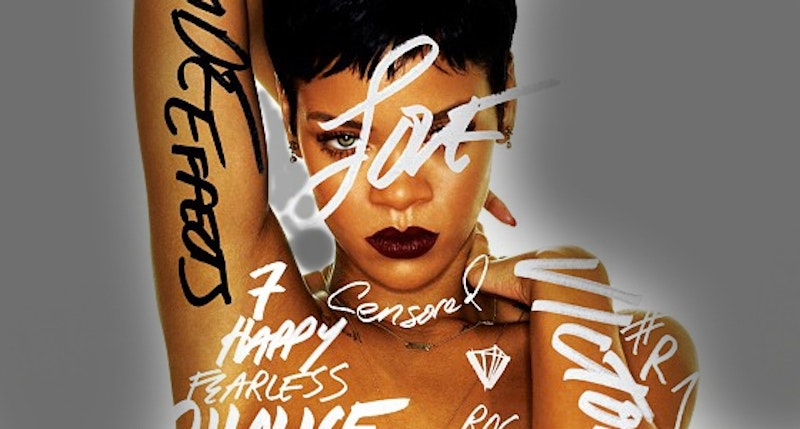 That Unapologetic is Rihanna's seventh album makes me feel old. It seems like only yesterday when “Umbrella” was making the rounds on the Billboard charts. As much as a defining moment that it was Rihanna has managed to stay relevant. She has become an extremely valuable brand in 2012. She's in all the right magazines. Turn the right streets in any major city and she's on billboards for all the right products. When a star reaches this stage in their career the release of a new album can become reduced to a statistical event, its production seemingly guided by a revolving door of producers making focus group decisions on what works. Fortunately for Rihanna, Unapologetic manages to be an enjoyable and above average album for someone so deep in the game.

On the club anthems front Unapologetic does not disappoint. “Phresh Out the Runway” sounds more like Kanye West than the man himself, rife with fashion references and hood braggadocio; even her cadences sound similar. If “Phresh Out the Runway” sounds raw though it is only an appetizer for the main course of “Pour It Up,” a track whose sibling could be Kendrick Lamar's current hit “Swimming Pools (Drank)”. “Strips clubs and dollar bills/Still got my money” the verse goes, Rihanna sounding more woeful than enthused. Much like “Swimming Pools,” “Pour it Up” is not so much musically interesting as thematically interesting. It represents a unique class of song that is the ultimate encapsulation of an increasingly popular hip hop ethos: party hard at all times and then party even harder, especially when you're better judgment tells you it ain't right.

That Rihanna parties hard isn't much of a revelation. The “life of the party” persona is one of many that she has freely embraced throughout her career. However, no singer since Prince manages to sound as sexually frank in their lyrics. The chorus for the Skrillex-sounding club banger “Jump” is a prime example: 'If you want it. Let's do it. Ride it. My pony. My saddle is waiting. Come and jump on it." It's something that a leering English major could have written in a bathroom stall. Yet for all its baseness it's a persona that for better or worse Rihanna sounds the most comfortable channeling.

However, even bad behavior has its limits. Perhaps nothing was more widely publicized than the domestic abuse incident with on-again/off-again boyfriend Chris Brown. Despite the man's contribution to women's rights causes following the incident his very public metamorphosis from squeaky clean R&B star to tattooed bad boy provided some doubt as to whether his remorse was genuine. After Rihanna's public reconciliation with him it seemed inexplicable given what he'd done. Her duet with Brown on “Nobody's Business” seems squarely aimed at such criticism, the tune's uptempo house production stripped clean of any possible emotional baggage,  Brown sounding ever like a young Michael Jackson and offering a lone plea “Please point me in the right direction.” The message is loud and clear, but given Rihanna's sizable female fan base it's something that probably would have been better left alone.

"Nobody's Business” coexists on the latter part of an album with tracks of reluctant love such as the medley “Love Without Tragedy/Mother Mary” and “No Love Allowed." Here a vague narrative starts to fall into place. While the lyrics are exceedingly general given the candor of “Nobody's Business,” the music is its saving counterpart. It is as if her current single “Diamonds” and later track “Stay” exist on opposite ends of a vast spectrum. Accompanied by a piano, “Stay” is when her voice truly soars, unadorned by the vocal layers that for the majority of Unapologetic obscure how gifted of a singer she is. The impact of “Diamonds” over its efficient one-trick structure is completely betrayed by a chorus packed with heinously pitched harmonies. It's an unfortunate gaffe in an album which otherwise manages to successfully keep up the back-and-forth story of a talented voice burdened by conflicted love.