A$AP Rocky Tries To Be All He Can't Be 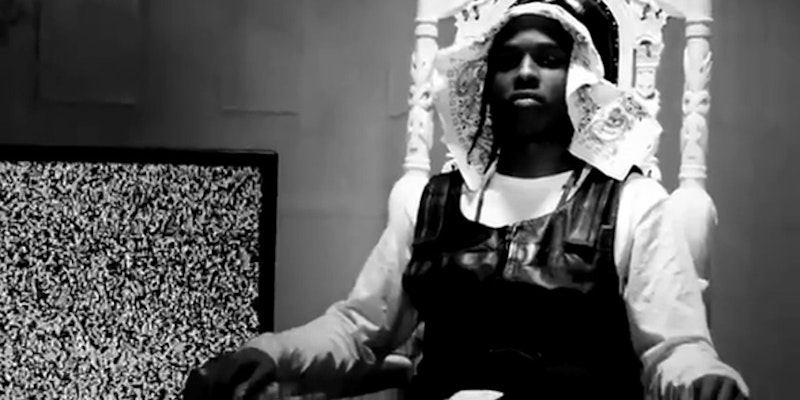 A$AP Rocky wants you to believe that the rap game needs him. On his debut LP, the prophetically titled Long.Live.A$AP, Rocky does his best to live up to the hype that has followed him since the release of his last mixtape. With a reported multi-million dollar record deal, Rocky's story starts to resemble the classic hip hop tale: from rags to riches, from rock bottom to the board room of Roc-A-Fella. However, there's more to what makes a modern rap artist bulletproof. They have to possess the right concerns that extend beyond delivering a few clever verses on a hit single; they have to avoid a future of featured artist credits on other artists' tracks that are similarly good but never truly great.

This isn't too say that Long.Live.A$AP isn't a good record or even a great record. Rocky's got definite mic skills. As a single, "Goldie" is well-crafted. Its basslines boom, Rocky rides the flow well, it's even got a pitched down vocal to add some dirt. "PMW" is similarly good. 808 hats ride high up in the mix, a serpentine synth line repeats itself, the chorus of "Pussy, Money, Weed/All a nigga need" sounds like welcome gospel. After a few tracks of Rocky stating that haters should back down you begin to wonder why they would be hating, who his rivals are, what the nature of the beef is. Then it starts to click. Rocky is 24. A self-professed pretty boy, he grew up in poverty, living in and around New York City. Beyond these few tidbits, little else is offered up onLong.Live.A$AP  that reveal a complex personality or a rich back story.

After a few more tracks you get to the album's other hits. "Fuckin Problems" features Drake and "Train" features rising star Kendrick Lamar. The album's fifteen tracks have arguably no weak moments. After a straight-through listen though it sounds like a follow-up album to a much more glorious debut. If there are chances taken on Long.Live.A$AP they are marginal ones. One could argue that all the great hip hop records have already been made. To its credit, Long.Live.A$AP doesn't tout itself as the long awaited follow-up to classic albums like Illmatic, Ready to Die, or Reasonable Doubt. On the contrary, Long.Live.A$AP doesn't come off as great because Rocky's personality isn't developed enough to mark him as a singular talent, someone destined to be a legendary artist. There are no new story telling yarns spun on Long.Live.A$AP, if there are any yarns at all. Beyond its moment or two of witty phrase turns there are no immediate moments in which I feel that knowing more about the man would paint a richer picture. But in a rap game increasingly focused on hype, trend hopping, and delivery over content, Long.Live.A$AP does have its place. To turn a phrase from Rocky himself, Long.Live.A$AP is like a runway piece within his closet.