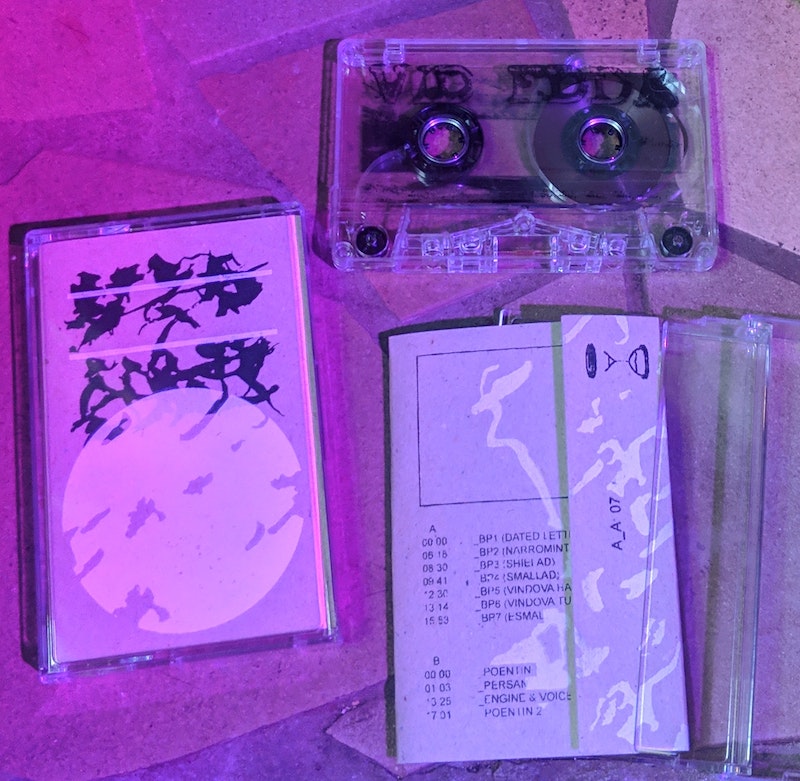 On Geneves Me Sansi, Chris Shields and Alexander Holm, as Vid Edda, feed plain language into the grinder, casing it into some other pattern of speech and entrails. The excess trimmings and remnants of reason spill to the floor, forming an offal slip ‘n’ slide. Down in it, vocals boom and toss under the lid like chicken liver frying in the skillet.

They recognize the risk of letting the practical concerns of song lyrics—love, etc.—go unprocessed. So they mangle the human voice into the mix until it fits like a spare button in the cosmic fold of preternatural sound, which is the land of the other, where steel guitars ascend into extraterrestrial altitudes, chords progress into pandemonium and brushes on drums cycle new configurations of time.

No steel guitars, chords or brush sticks to speak of on this cassette, however. Instead, Shields and Holm start at the top risers of the tower of babel, decades after moments of ascension—after Coltrane discovered more sky, after Reich rode the rails, after Art Bell took another call—in the year 2019, when the open channels of communication seem more spacious yet more congested.

Or during the Ford Model N days, when hand-cranking was the thing. If you couldn’t afford to drive, you could take A Trip Down Market Street in the dark, while mycelium spotted the warbling film reel. If the engine failed, you took a look around and enjoyed the scenery, breathing in brush fire, lost in Arizona Territory.

Maybe Shields and Holm wouldn’t make the best radio hosts. False starts, dropped signals, and general interference abound, like they’re throwing baseballs at satellites, treating them like windows meant to be broken. Not the best city planners either. A lot of stop ‘n’ go traffic patterns that make little to no logistical sense. Perilymph juices the engine while soft shell fenders bump into other infernal machines. Small flare-ups of curling silver sizzle on the side of the street in a grid of fire. A neighborhood laid out in the shape of a circular saw, but no rough stuff, no road rage, just a lot of tires spinning, rubber skitters meeting road, malleable steel put through the wringer.

Yet, just when things couldn’t get any more preternaturally wrung out on “Persan,” the extended snap, crackle & pop in the cereal bowl of experimental noise ends with light but enthusiastic audience applause, beginning the descent, bringing the listener back to solid ground.

Performed live at L'Ecurie in Geneva to what sounds like two-to-four pairs of hands clapping, the recording threatens to break the attendance record for listeners, as there are more copies of the cassette than observers of the initial event. In a digital world so thoroughly surveilled and exhaustively archived, to what extent does live performance still matter?

Then, the duo casts “Engine and Voice” after the applause dies down. Though the field recording is their most concrete track, having heard what came before, there’s something displaced about it. The rhythm of a boat engine preps the track for some dialogue, where a woman wonders about the age of the fish she just ate, before asking the fisherman, possibly the voiceless man pacing the rhythm of the engine, for specifics.

He’s about to answer, but the scenery cuts to plain English, the plainest yet, where a narrator recites a collage of words seemingly lost without the accompaniment of a power point presentation, the file of which must be housed in a busted USB drive melting in a parking lot somewhere.

“We are on a grass plain, an open landscape, designed to study or just relax,” the narrator describes. “To the right of the entrance is an old sign that I cannot read.”

“One wanted to build infrastructure, not for transportation, but it is believed that the speed of time can be controlled by a network of wireless to run from station to station, thus connecting all growth, work and material,” he continues.

Glitch dust and tremolo fuzz caterpillars around the spoken words like a beard on Wooly Willy, like loose stool streaming by the roots growing into cracked clay pipes.

“Over a couple of years, one could measure a significant change in the understanding of time,” he says. “Eternal life is something we experiment with.”