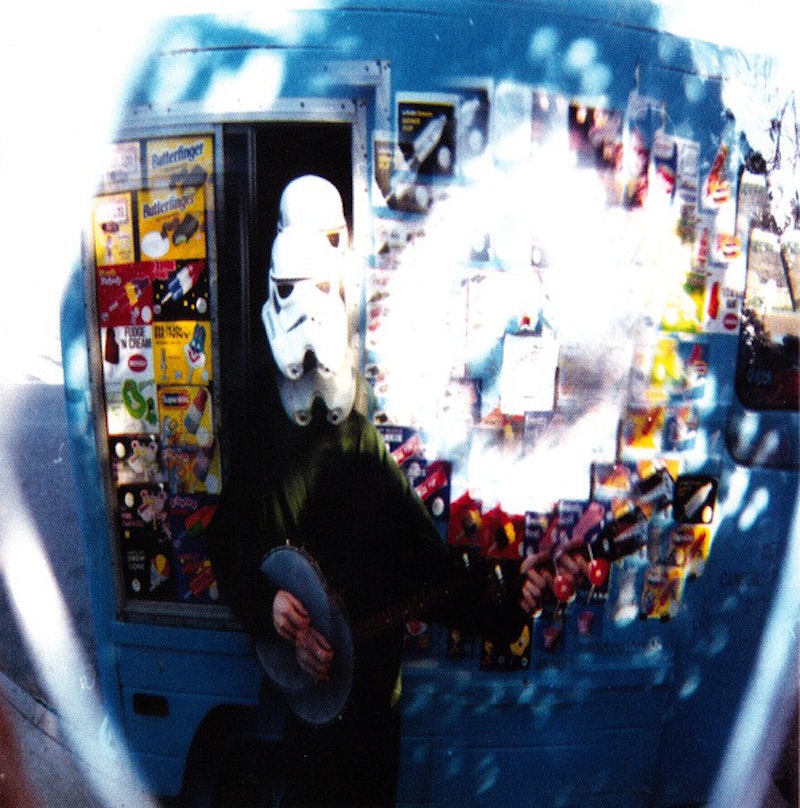 From the first moment an artist shares their work publicly all meaning it had before then becomes an afterthought. Take Beck. The California singer-songwriter wasn't trying to make any concrete political statements on his breakthrough 1990s albums yet they overflow with countless lyrical references to economics, moral decay, mass media, and philosophy.

Beck was never a protest singer, but was an astute political observer. His early lyrics were forged in the limbo of the outsider where no one exactly fits into the idealized/generic moulds of "conservative,” "progressive," "realistic" "quixotic," "high" or "straight." These lyrics mirror his early songs and arrangements, all of which resisted tags of folk music, electronica, rap, and alt-rock despite the fact that he was heavily influenced by all of them. In the poetic exuberance of the young Beck, the American socio-political milieu appears as a metaphysical Rube Goldberg machine on the fritz.

The DGC Rarities compilation track "Bogus Flo" is one of his finest unplugged moments. This anthem sounds like a tribute to the early styles of Dylan or Phil Ochs and features some of Beck's most intense lyrical juxtapositions. "It's completely rancid and beautiful like a force field of multiplying meat"—this line celebrates unconventional beauty standards and the symbiosis of life and death. "People with cordless personalities"—that's a jab at show biz leeches and other shallow social climbers.

Monetary rewards (represented by the sales that "pile high") are compared to an apocalyptic dildo. It's an acidic way of saying that the corporate music industry is fucking up the entire world. The words that follow find Beck biting that hand that feeds him as he compares big label success to a vapid swamp. It's important to remember that this song was written in 1989, five years prior to the massive success of the artist's first and most famous hit single "Loser." This fact gives the derision for the mainstream music industry expressed in "Pay No Mind" the extra sting of an alienated outsider's viewpoint.

"Electric Music And The Summer People" is a blast of avant-bubblegum irony that was the B-side of the late-90s hit "New Pollution." It includes the lines "Wandering children, ready and willin'.../abandoned coal mines, we'll have a good time/sunstroke rivals recycling bibles." These conjure up images of a rural Babylonian wasteland plagued by homelessness, violent crime, restless youth, corrupt religion, and other consequences attached to the decline of the labor industry and American working class. In this grotesque purgatory a faithful shelter from nothingness is impossible and Beck's prose becomes electrified by desperate hedonism.

The 2002 release Sea Change was a break-up album. It was recorded soon after the artist had ended a long-term relationship and it was his first major release to prominently feature narrative lyrics. Gone were outrageous proclamations involving sun-crushing sex toys and enchanted walls of decaying flesh. The Beck who lived in the post-industrial Outer Limits got ditched at the altar. A lonesome world-weary songster took his place. Before electronic media became ubiquitous, Beck's lyrics offered a respite from the false tunnel vision that was an organic part of the less-technologically integrated 90s. Back then expanded consciousness was often viewed as a side effect of delusion, drugs, and avant-garde poetry. Such clustered randomness is a dominant facet of the 21st century. Introspection and intimacy represent the ultimate in post-Internet "weirdness." When albums like Sea Change and Morning Phase embrace such themes we experience the outsider politics of early Beck turned upside down.