Getting Busy to Guerilla Goop

Eraser Stargazer by Guerilla Toss is a perverted take on Ponytail’s day-glo ecstasy. 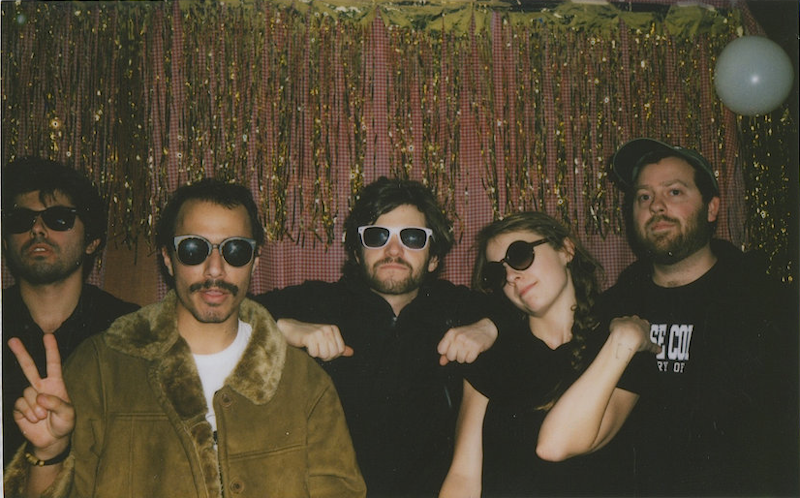 Guerilla Toss scares me. Before getting a copy of the band’s new album Eraser Stargazer, their first for DFA, I’d only heard the name in passing and missed a handful of shows where they opened around Baltimore. Friends were complimentary, but I knew next to nothing about Guerilla Toss’ fuck style, other than that they had a music school background and shared bills with likeminded avant-garde bands like Horse Lords and Guardian Alien. So I’m digging around the Internet for interviews, and come across this Impose feature from 2013, an interview topped by a group picture with one of the members’ naked, with his cock and balls hanging out and barely blurred. As President Trump would say, “Believe me, there’s no problem there.” In any case, I think that’s their old bassist Simon Gompers smirking, unit deployed, and that was three years ago, promoting their first record Gay Disco (which I haven’t heard), but the music on follow-up Eraser Stargazer isn’t just sexual, it’s balls out, slinky-sexy freak-funk, conjuring images of trench coat flashers getting alleyway oral gliding through some technicolor cityscape where Fritz the Cat is getting tested for VD at the clinic while balding burnouts are dropping acid beneath rusty red vents spewing grimy green steam out onto the streets teeming with speed freaks and bimbos and creeps and freaks alike.

The record begins with singer Kassie Carlson shouting “YOU WANT IT? WHY DON’T YOU LOOK OUT THE WINDOW!” Enter the R. Crumb sex funk that is Eraser Stargazer. Engorged, phased-out bass burps and gurgles alongside Peter Negroponte’s rock-steady drums. Bassist Philip Racz and Negroponte are the exoskeleton of the Guerilla Toss crustacean. They don’t sound primate, or particularly sneaky or violent (whether the misspelling of “Guerrilla” in their name is intentional or not, it’s there). They remind me a lot of the dearly missed Baltimore art rock band Ponytail—Kassie Carlson’s yelp and the timbre of her voice sound a lot like Willy Seigel’s, and the scuzzy, viscous streetwalker throb of Guerilla Toss is a perverted take on the same sort of out of body ecstasy that Ponytail sought and achieved through winding, serpentine major key guitar riffs and Seigel’s wordless singing in tongues. Both bands are relentlessly day-glo, foaming at the mouth and appropriately animalistic according to their monikers.

When I put the record on—colored “day-glo green,” like cartoon slime—I assumed it was pressed to play at 33⅓ rpm, and listened to all of Eraser Stargazer twice like this, figuring they’d gotten a new singer or something. The slush was even sexier slow, grinding and gnawing about in some thick swamp. When I A/B’d the record with the digital files and realized my mistake, the music remained leering and goopy. Eraser Stargazer isn’t everyday music, it’s a bit much on the head, but perfect to get busy to if a mellow mood’s the last thing on your mind.