Big Ups slip it in on Before a Million Universes. 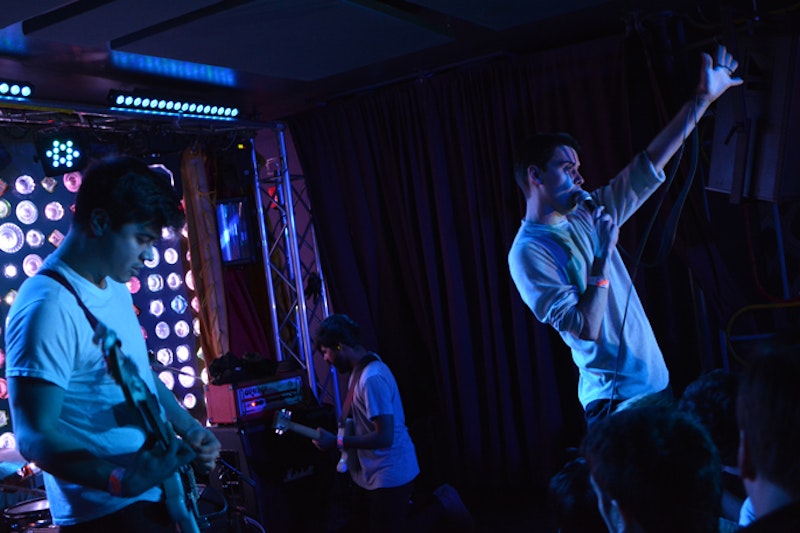 Around the time the last Big Ups record, Eighteen Hours of Static, came out, the band was already throwing out a potential name for the follow-up: Raoul_DVD. I was an early champion of this title, thought it was brilliant, hilarious, and perfectly fit the sound of the then-imaginary sophomore LP; more extreme, inscrutable, and spread out in every direction. The old maxim about bands having 18 years to write their debut and six months to write their follow-up often shows in the way that debuts are mission statements, sometimes as definitive and as concise as you’re going to get from a particular band. Not everyone can be Animal Collective or XTC and change instrumentation and lineups from album to album. And, as a four-piece rock band, you’re also always conscious of the cliché of everything going downhill fast as soon as a keyboard is introduced or the member with a George Harrison (or, if you’re really unlucky) Spiral Stairs chip on his or her shoulder starts writing songs, or makes a big fuss about it internally. I’m a stickler for titles, album sequences and lyrics—they’re as important as the music itself. To me, Raoul_DVD signified something less measured, more gleefully unhinged, and sick, a band coming at their music from every other angle.

It’s not Raoul_DVD. The second Big Ups album is called Before a Million Universes, but its tone and attitude is exactly what I expected, vague as my predictions were. This is a much darker and more intense album than Eighteen Hours of Static, with the heavy much, much heavier, and the moody blues even moodier. The songs flip between yawping and pounding and whisper-quiet passages of grim anticipation and contemplation. Singer Joe Galarraga’s lyrics are mostly indecipherable without a lyric sheet, except when his howl cuts through the down-tuned din. “Contain Myself” is sung in conversation, spoken, with a chorus that explodes vocally and goes into these sinister octave riffs that sound straight off the 666 Tapes. Throughout Before a Million Universes, Big Ups throttle between extremes of dissonant distortion, and spaces of clean, palm-muted guitar and bass with rapidly whispered invocations of confusion and paranoia: insecurity, negativity, lack of inertia, warmth, disconnection and disillusion. The first single “Capitalized” mixes the two extremes a little closer together, but songs like “Fathers of Yes,” “Meet Where We Are,” and closer “Yawp” all feature very pretty and anxious build-ups and go-betweens where Galarraga’s vocals are almost inaudible and hard to hear or understand without headphones. I really wish this came with a lyric sheet, because I love Galarraga’s lyrics and try as I might I can’t make out most of the words on here.

The record itself is gorgeous, day-glo “Halloween orange,” but not at all reflective of the music. It reminds me of whatever Raoul_DVD was to become: playful, silly, less grim and angry. But Before a Million Universes is still a Raoul_DVD second album: it’s their Insomniac, a blunting of the edges, pessimistic and pissed off, melodically muddier and a left turn into the woods. The songs all flip poles, so the record is consistent despite each song containing a lot of detail that only opens up after five or six full listens. Sonic nerd stuff that jumped out at me immediately: “Knight” is pure Black Sabbath, driven by a Masters of Reality riff; “Hope for Someone,” the first song on side two, has a desperate sort of sliding hook in the intro and repeated throughout; and “Yawp” ends with seven unresolved final stomps by the band, closing a record that is extremely forceful about communicating a feeling of loss, repetition, and stagnation. A Raoul_DVD is never the album you go to first; it’s the kind of record you engage with as an understanding friend. Just as you only make certain jokes in front of familiar faces, there are the moodier parts that we keep to an even smaller group of people. Get to know Big Ups with Before a Million Universes and ask if they’re okay—this is the dark shit, the crisis time tunes.