The Illusory Patriarchalism of “Sk8er Boi”

The mass misinterpretation of Avril Lavigne’s 2002 narrative masterpiece has kept it from canonization. 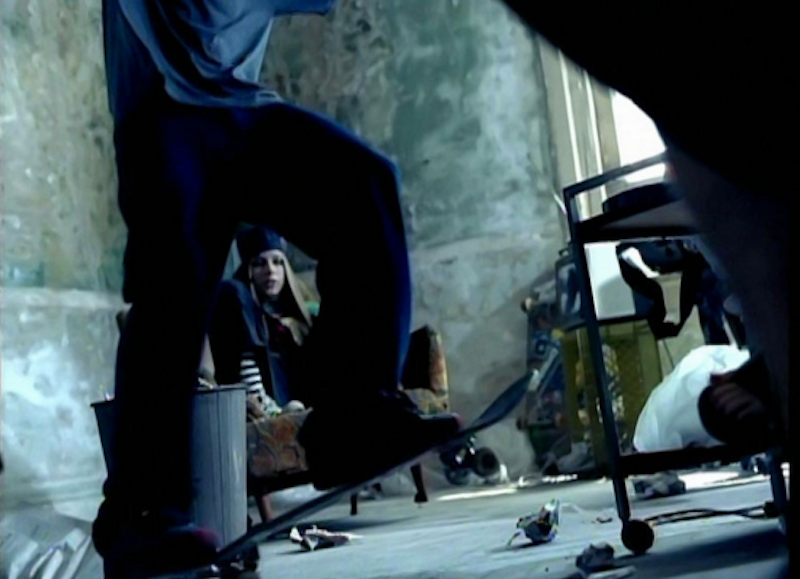 One of the low-key best songs of the 00s, Avril Lavigne’s 2002 pop-punk/post-grunge narrative single “Sk8er Boi” has received shockingly little critical analysis. What’s up, Pitchfork? Spin? Stereogum? Lavigne’s influence needs to be recognized: without her, there’d be no LCD Soundsystem; without LCD Soundsystem, there’d be no Brooklyn. Yeah, Mark Richardson, scared yet?

Then I wondered: what inspired this Avril-erasure in the first place? I was prepping a puff piece for “Sk8er Boi”’s upcoming 14th anniversary in August when I realized just how problematic the lyrics are. There’s a common self-deception (often disguised as ignorance) that allows critics and consumers to enjoy music made by bad people. It’s the reason James Brown (domestic abuse) and Led Zeppelin (shark incident) still have listeners. But, as Jim Derogatis says in an interview with Jessica Hopper, “There are not pro-wife-beating James Brown songs. There are not pro-rape Led Zeppelin songs.” The problem, in this case, isn’t the artist; it’s the song.

The opening lyrics of “Sk8er Boi”—“He was a boy, she was a girl/Can I make it any more obvious?”—impose an aggressively cisgendered, heteronormative worldview on the listener. The following lines—“He was a punk, she did ballet/What more can I say?”—establish the speaker’s propensity to judge and generalize, leaning on clichéd social roles to convey exposition. They also call the speaker’s motives into question: why is she being so unfairly harsh to the “pretty face” with “her head […] up in space,” looking for any reason to degrade her?

Going further, why is practicing ballet a sign of snobbery and inauthenticity? Ballet isn’t some after-school hobby for teenagers, and Pretty Face has probably dedicated the majority of her adolescence to the art form. And what qualifies our male protagonist as a punk? His baggy clothes? Not according to Wikipedia! What a poser.

The most disturbing aspect of the song, though, is the speaker’s insistence on competing with Pretty Face. The former na-nana-boo-boo’s the latter with Drake-level pettiness. Take these lyrics, for example: “Five years from now, she sits at home/Feeding the baby she’s all alone,” and “Sorry girl but you missed out/Well, tough luck, that boy’s mine now.”

Why does the speaker infantilize Pretty Face, always calling her “girl” instead of “woman?” And, better yet, why is Lavigne pitting women against women?

Then I realized that “Sk8er Boi” is The Adventures of Huckleberry Finn and The Merchant of Venice, presenting a problem to the listener without directly explaining it. Lavigne has respect for her audience, never patronizing or pandering, using her pop-star platform as a catalyst for discourse instead of an opportunity to sermonize. “Sk8er Boi” is not patriarchal; it’s about the patriarchy.

I have achieved “Sk8er Boi” enlightenment, successfully passing through the three levels of interpretation:

—Empathizing with the speaker and supporting her antagonization of Pretty Face.

—Empathizing with Pretty Face and problematizing the speaker’s comments.

—Empathizing with both female characters and recognizing that the real antagonist is Sk8er Boi himself.

See, the speaker’s attack on Pretty Face is borne out of insecurity, an insecurity that Sk8er Boi exploits. He felt entitled to Pretty Face’s affection, and became angry when he didn’t receive it. Unbeknownst to his true intentions, the speaker sings: “I’ll be at the studio, singing the song we wrote/About a girl he used to know.” Sk8er Boi is using his current girlfriend as a conduit for revenge against a teenage crush.

“Sk8er Boi” is not patriarchal propaganda; it’s a feminist anthem, subtly detailing the way men manipulate women into competing with each other. Critics, amend your “Best of the 00s” lists and recognize Lavigne’s masterpiece.